A Buddhist monk fighting a battle in the Supreme Court to oust him from his temple has failed in a bid to suppress allegations about a visit to a Sexyland adult store.

The committee of the Khmer Buddhist Temple Association, which runs the Eysan Meanchey Temple in Thomastown, has been trying to force head monk, Venerable Hout Chhet, to step aside following a series of complaints in a dispute that is still before the court. 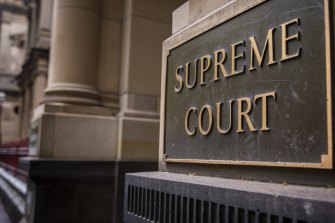 The dispute is still before the Supreme Court. Credit:Wayne Taylor

The allegations before the court were that the abbot breached monastic discipline rules, known as Patimokkha, including by having a sexual relationship with a woman and taking donations and money intended for the association.

Venerable Chhet has denied stealing money or engaging in sexual intercourse with any person while a monk.

The abbot made an eleventh-hour application to the Supreme Court on Monday to try to stop television program A Current Affair from broadcasting a story about the dispute.

A preview of Monday night’s Trouble in the temple story was played to the court, in which the focus was on the monk “caught shopping at Sexyland”.

Amid the allegations before the court was that $276.85 was spent at Sexyland in January 2018 on the abbot’s bank account.

Venerable Chhet’s lawyer, Paul Hayes, said the report was salacious and a suppression order was needed on the Sexyland allegations to prevent the broadcast because it would risk the administration of justice and the monk’s safety.

“The overall tenor of the report is about … the Sexyland issue and nothing else about this case,” Mr Hayes said.

Mr Hayes said his client squarely denied going to Sexyland and there was no direct evidence, such as witnesses or CCTV footage, to show he had been there.

Zander Croft, lawyer acting for Channel Nine, which owns A Current Affair and this newspaper, said there was no evidence that Venerable Chhet was in peril and the “horse has already bolted” with the Sexyland allegation already published in other media.

“Your honour is not going to be swayed by what we say is fair and accurate reporting in the media,” Mr Croft said.

Andy Naidu, who is representing the plaintiffs bringing the action against the abbott, said this was another example of Venerable Chhet trying to obstruct proceedings.

Justice Greg Garde refused to grant a suppression order, saying he saw no risk to the proper administration of justice or to Venerable Chhet’s safety from the airing of the program.

“There is no evidence that explains with any level of satisfaction why it would,” Justice Garde said.

Justice Garde said an affidavit had been filed to the court that claims it was Venerable Chhet’s brother that had used the credit card “to effect the Sexyland” transaction.

“To the best of his knowledge the purchase at Sexyland was his brother’s purchase and that he has never visited Sexyland,” Justice Garde said of the affidavit.

In July, Justice Garde granted an order to restrain Venerable Chhet from acting as the abbot while the proceedings were underway.