Businessman found with £10,000 worth of magic mushrooms avoids jail

Millionaire businessman, 44, found with £10,000 worth of magic mushrooms growing in bathroom of his £1.4m Henry VIII castle in Kent avoids jail after prosecutors accepted it was for personal use

A businessman who grew up to £10,000 worth of magic mushrooms in his £1.4million home in a Kent castle once frequently visited by King Henry VIII has been spared jail after prosecutors accepted the drug was for personal use.

Police had gone to see Simon Giles on an unrelated matter when they found the quantity of class A drug in his bathroom in the south wing of Grade-II listed Lullingstone Castle in Eynsford, a court heard.

The 44-year-old entrepreneur later told officers they had a ‘transformational’ effect on his mental health and he would microdose on a daily basis.

An expert opinion heard in court said the amount seized would last him 14-and-a-half years of microdosing.

Giles said that having decided to grow his own after buying spores and guides on the internet, he was ‘surprised’ how quickly they grew and it got ‘out of control’.

But despite finding what was described as an ‘industrial’ quantity, it was accepted by the prosecution it was all for personal use and not onward supply, Maidstone Crown Court in Kent was told.

Giles has been given an eight-month jail term suspended for 18 months. 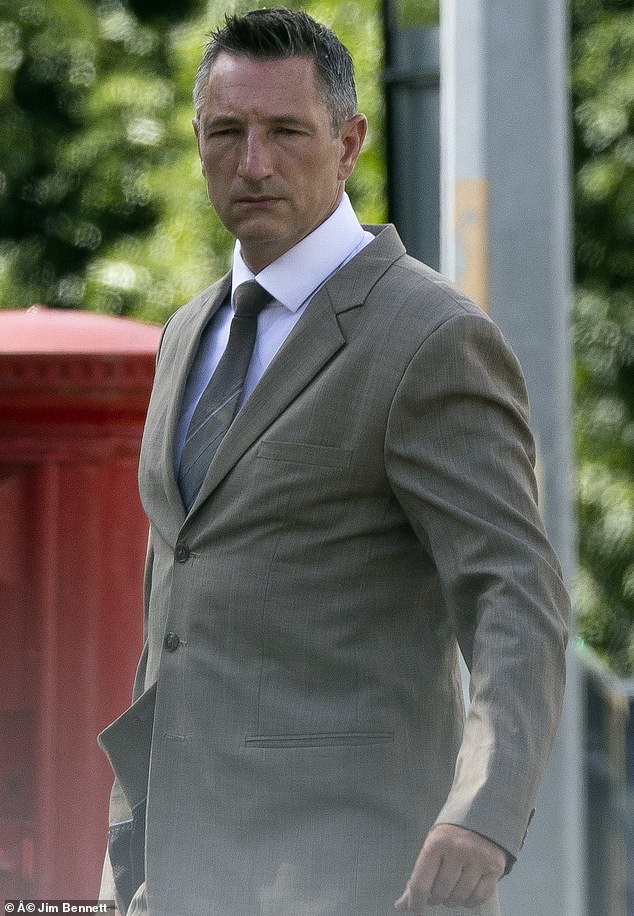 The psychedelic substance more formally known as psilocin and psilocybin was found in 10, clear plastic containers during a search of his property on May 5, 2021.

Written on each box were a series of fractions and acronyms, including the letters ‘GT’ believed to be a reference to a variety of magic mushroom known as Golden Teacher.

The court was told bathrooms are commonly used by growers of the illegal substance.

Other drugs equipment was discovered in Giles’s kitchen, including a dehydrator and sterilising fluid.

‘A mushroom grower’s aim is to create as sterile an environment as possible to increase maximum yield,’ added Miss Todd.

Police also found notebooks in which Giles had jotted down various weights.

He was arrested and gave a full account when interviewed, said Miss Todd. 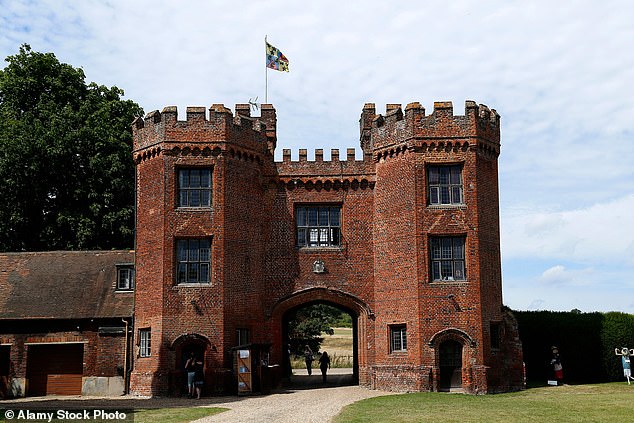 Police had gone to see Simon Giles on an unrelated matter when they found the quantity of class A drug in his bathroom in the south wing of Grade-II listed Lullingstone Castle in Eynsford, a court heard (pictured – stock photo of the castle)

‘He said he had been suffering from poor mental health and depression and that the magic mushrooms had a transformational effect on his well-being,’ she told the court.

‘He decided to experiment and bought spores and guides from the internet, and understood there were different strains.

‘He was surprised how quickly they began to grow and when he cut them to harvest them, they kept growing back and essentially it got out of control.

‘He dried them out and vacuum-packed them. He said he tried to put a stop to it, putting them in the bathroom and hoping they would die off.

‘He said it was for personal use – crushing them and making capsules and microdosing daily to improve his mental health.

‘He said he wasn’t aware they were a class A drug.’

Miss Todd said the overall potential street value of the drug seized was between £4,830 and £9,660.

‘The expert concluded that the amount seized would generate enough to cover 14-and-a-half years of microdosing, but goes on to say that what was found is indicative of personal use,’ she added. 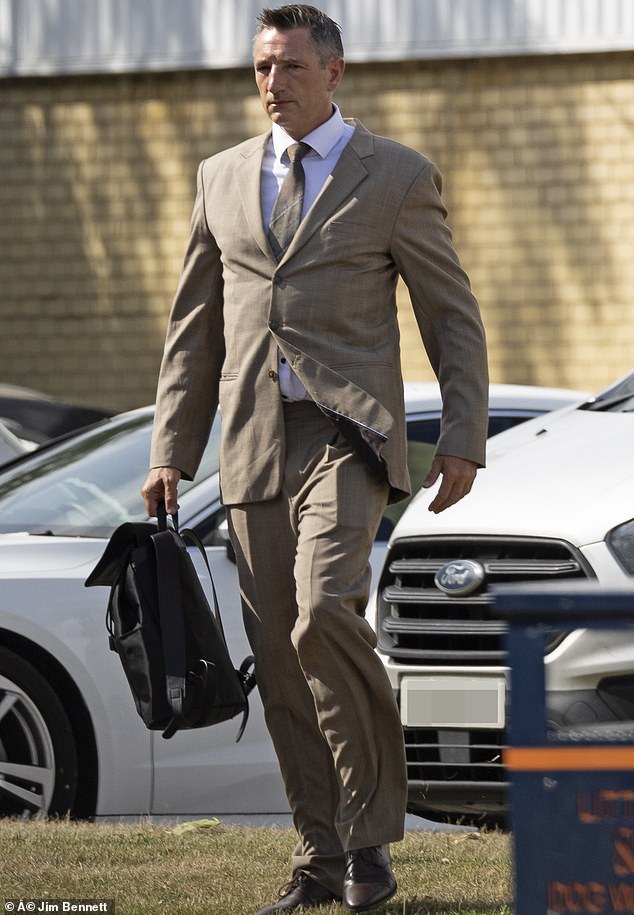 Giles was given an eight-month jail term suspended for 18 months, and ordered to do 120 hours of unpaid work

The court heard police also found a stungun disguised as an ‘old-style’ mobile phone in his safe during the same search.

Giles, a dad of three with a fourth child due in three weeks, told police it had been brought to a party at his home about eight years previously.

He said guests had ‘passed it around like a toy and saw sparks coming out of it’.

It was then put away and found several years later, when he decided to lock it in his safe as he did not want his children to get hold of it, said the prosecutor.

Giles, whose occupation is listed with Companies House as an investment manager, later pleaded guilty to producing a class A drug between September 1, 2020, and May 6, 2021. He also admitted possessing a prohibited weapon.

In January 2021, he was reportedly facing eviction from his stately home following a High Court battle with HSBC bank.

Lullingstone Castle dates back to the 15th century and is where the Tudor monarch Henry VIII would visit with Queen Anne, as well as hunt and joust in the estate grounds.

The property, the majority of which is now owned by the Hart-Dyke family, was also home to the 1930s silk farm which produced silk for Queen Elizabeth II’s coronation robes and wedding dress.

It was not said in court what business role Giles, who now lives in Rectory Place in Hawkwood Lane, Chislehurst, Kent, currently holds.

His only two previous convictions are for drink-driving and possessing cannabis and date back to the late 1990s.

But on sentencing him today, Judge Julian Smith said it ‘beggars belief’ how someone of his talent and intelligence made such an ‘extremely stupid but deliberate’ decision.

‘It is a serious mistake that has brought him before the crown court and at risk of a custodial sentence,’ the judge told the court.

‘Why a talented, intelligent man, with a first-class honours degree, someone with many options and of his ability, should commit a criminal offence by growing a class A drug beggars belief.

‘It is not stupid – it is asinine. It is not just a question of letting himself down. He put in peril all he holds most dear.

‘I am sure I am telling him nothing that dark moments in the middle of the night haven’t brought to the forefront of his mind.

‘Had he decided to profit from this, then he would have been a drug dealer – not just a foolish and selfish man but a criminal of the worst kind.’

Giles, who was supported in court by his heavily pregnant partner, was given an eight-month jail term suspended for 18 months, and ordered to do 120 hours of unpaid work.

A request for him to pay £1,200 court costs was reduced to £600 at a rate of £50 a month after defence counsel Alexander Upton said finances were ‘stretched’.

Speaking directly to Giles as he stood in the dock, Judge Smith said: ‘It doesn’t take me to tell you how foolish you have been, and the risks you have taken in your life as an entrpreneur and a contributor to society are nothing compared to the foolish choice you made in deciding to do this.

‘It’s a class A drug. Whatever advice your friend gave you about how it would help, it was advice to be ignored and rejected.

‘This was a great deal of a controlled substance you have managed to produce but more out of ignorance than a commercial motive.

‘I’m giving you this chance. I don’t suspect you will ever be back here again.’

Giles thanked the judge as he left court.

A forfeiture and destruction order was made in respect of the magic mushrooms and related paraphernalia.