Campaigners outraged at wiggly lines painted in town do a CONGA

Baffled residents have taken to dancing on ‘Britain’s most bonkers road markings’ in protest against a seaside town’s bizarre new traffic scheme.

Clevedon locals participated in a fancy dress ‘Wavy Wriggle to Save Our Seafront’ campaign today after its council implemented the new whacky lines.

While residents claim the painted road markings look like a ‘driving lane for drink drivers’, North Somerset Council say these were designed to help slow traffic. 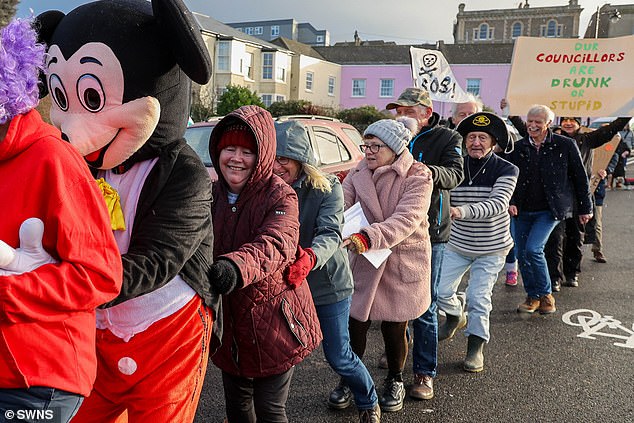 In response, fed up locals staged a protest at the town which they claim is becoming a ‘laughing stock’.

The organiser’s post read: ‘Wavy Wriggle to Save Our Seafront.

‘Are you against the barmy curvy lines that have made North Somerset Council into a viral laughing stock of the nation?’

‘Join us on Sunday 15 January at 3pm by Clevedon Sailing Club to “Snake On Sunday” where we will “walk the Line” in a wavy wiggle conga to show how we are against the unsafe wiggly changes to our once lovely Victorian seafront which has been vandalised by NSC.

‘We will demand it’s put back to the safe space it once was. Fancy dress optional Home made Banners essential.’

One person commented: ‘The road layout is a hot mess, the cycle lane is next to the pavement, then there is parking, then out other side of the road is normal one way traffic.’

Another local added: ‘I kid you not, the squiggly lines are opposite driveways to allow vehicles to swerve to get round and into their drives without crossing the white line.’ 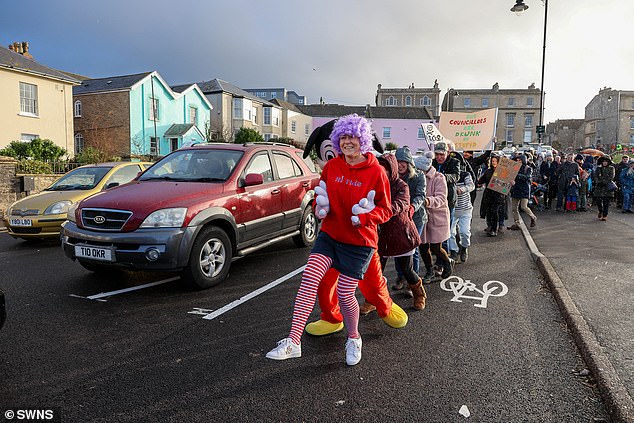 The protest organiser’s post read: ‘Are you against the barmy curvy lines that have made North Somerset Council into a viral laughing stock of the nation?’ 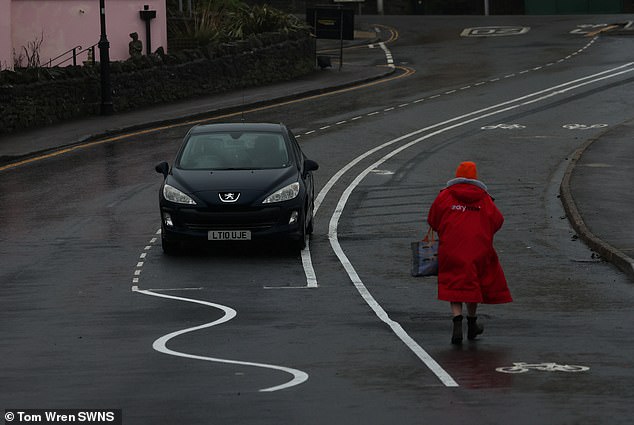 One posted: ‘Balamory from hell for a motorcycle.’

The road scheme has seen a 400-metre segregated cycle lane installed along the seafront and the parking reconfigured. The road has also been made one way.

The new cycleway will form part of the ‘Pier to Pier’ link between Weston-super-Mare and Clevedon.

But North Somerset Council has said the lines are in fact part of the design and aimed at making the road feel narrower and slow down traffic.

It is also hoped the wiggly lines will help reduce unwanted parking. 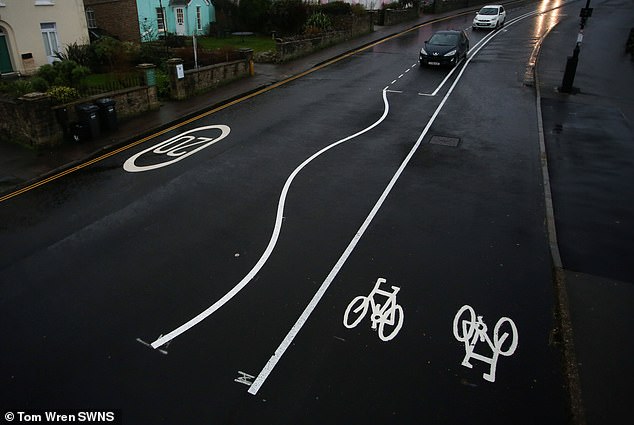 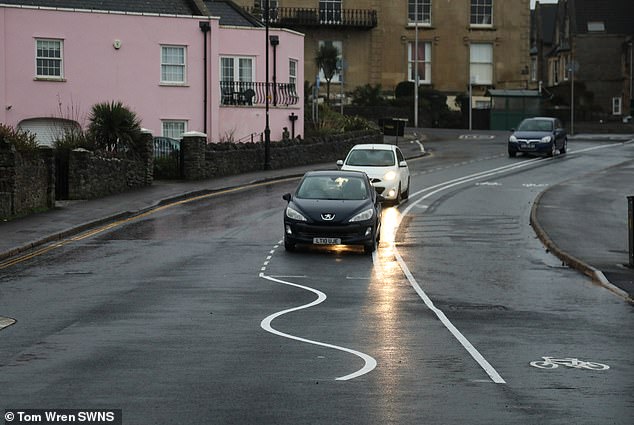 A council spokesman said: ‘The lines are a design feature to reduce the potential abuse of parking at these locations and help make the road feel narrower, which is a technique used to slow traffic speeds.

‘In this case, the area is adjacent to the sailing club entrance so needs to be kept clear.

‘A wavy line provides uncertainty to the driver and is proven to help reduce unwanted parking.’

The squiggly lines are due to be finished with a surface treatment in the Spring.

North Somerset MP Liam Fox described the scheme as a ‘shambles’ and urged council chiefs to kill off the project and apologise to the people of Clevedon.

The Save our Seafront (SOS) group has also handed a detailed report listing safety concerns about the layout to the Department of Transport, asking it to intervene.

A petition against local seafront changes has now collected more than 6,000 signatures.