Canadian PM Justin Trudeau denounces toppling of statues of Royals in protest at deaths of 1,000 indigenous children as head of Queen Victoria is recovered from river

Canadian Prime Minister Justin Trudeau on Friday denounced the burning and vandalism of Catholic churches  and statues of Royals that has followed the discovery of unmarked graves and former schools for Indigenous children.

Several Catholic churches have recently been vandalized or damaged in fires following the discovery of more than 1,100 unmarked graves at the sites of three former residential schools run by the church in British Columbia and Saskatchewan that generations of Indigenous children had been forced to attend.

The nation also saw a series of attacks Thursday – Canada Day – on statues of Queen Victoria, Queen Elizabeth and other historical figures.

Trudeau, himself a Catholic, said he understands the anger many people feel toward the federal government and Catholic church. The government has apologized for the schools and Trudeau has called on Pope Francis, too, to make a formal apology.

‘It’s real and it is fully understandable given the shameful history we are all become more aware of,’ he told a news conference.

‘I can’t help but think that burning down churches is actually depriving people who are in need of grieving and healing and mourning from places where they can grieve and reflect and look for support.’ 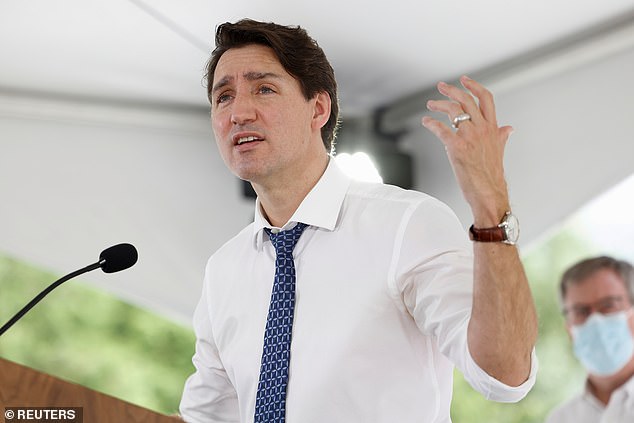 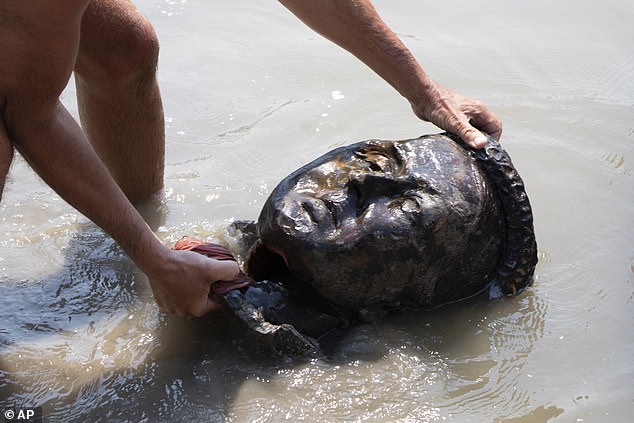 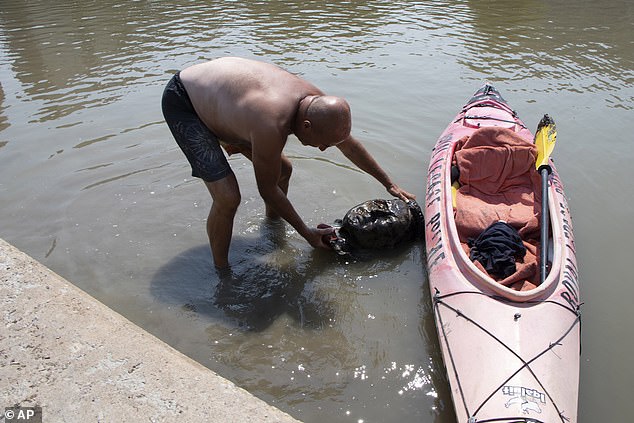 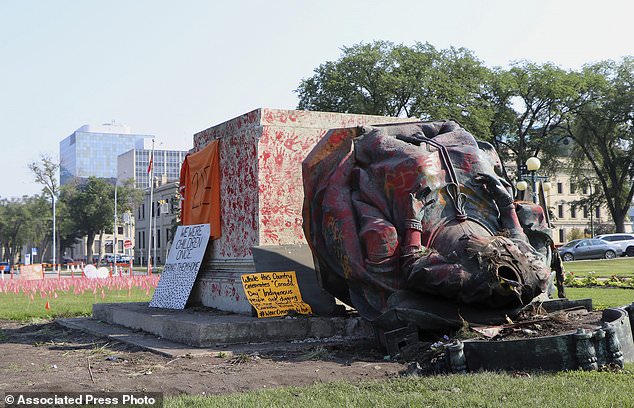 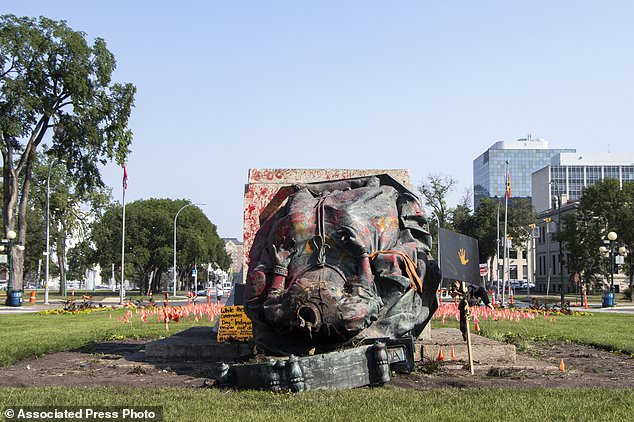 On Thursday, statues of Queen Victoria and Queen Elizabeth on the grounds of the Manitoba legislature were tied with ropes and pulled down by a crowd 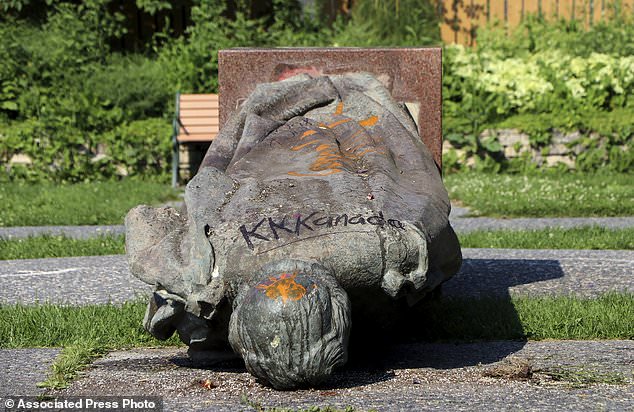 On Thursday, statues of Queen Victoria and Queen Elizabeth on the grounds of the Manitoba legislature were tied with ropes and pulled down by a crowd.

The statue of Queen Victoria was covered in red paint and its base had red handprints on it. On the steps behind the statue were hundreds of tiny shoes, placed there to recognize the children who went to residential schools.

Arlen Dumas, grand chief of the Assembly of Manitoba Chiefs, was at a separate event at the time but said he was shocked at what happened.

‘I personally wouldn’t have participated in that,’ he said, though he added, ‘Mind you, it has been a very triggering time over the past few weeks.’

‘It’s unfortunate that they chose to express themselves the way that they did. But it´s actually a symbol of the fact that there is a lot of hurt and that there´s a lot of frustration and anger with just how things have happened,’ Dumas said.

Premier Brian Pallister called the vandalism ‘a major setback for those who are working toward real reconciliation.’

‘Those who commit acts of violence will be pursued actively in the courts. All leaders in Manitoba must strongly condemn acts of violence and vandalism, and at the same time, we must come together to meaningfully advance reconciliation,’ he said in a statement.

In other incidents on Canada Day, a statue of Queen Victoria in Kitchener, Ontario, was doused in red paint.

The head of the Queen Victoria statue was removed and thrown into the Assiniboine River, which was later fished out by a kayaker.

In Victoria, British Columbia, a statue of Captain James Cook was dismantled and thrown into the harbor. The statue was replaced with a wooden cutout of a red dress – a symbol representing murdered and missing Indigenous women – and its base was smeared with red handprints. 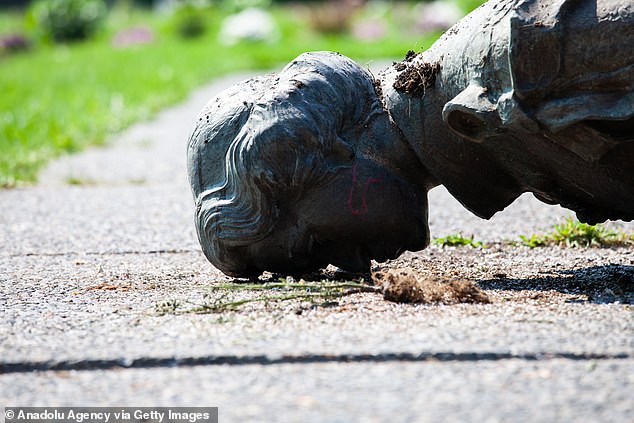 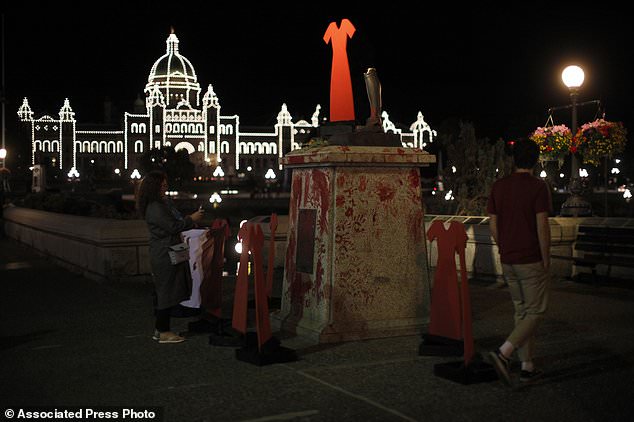 The statue of English explorer Capt. James Cook was vandalized and removed from it’s base and tossed into the inner harbor and replaced with red hand prints and a red dress in protest of missing and murdered Indigenous women and girls in Victoria 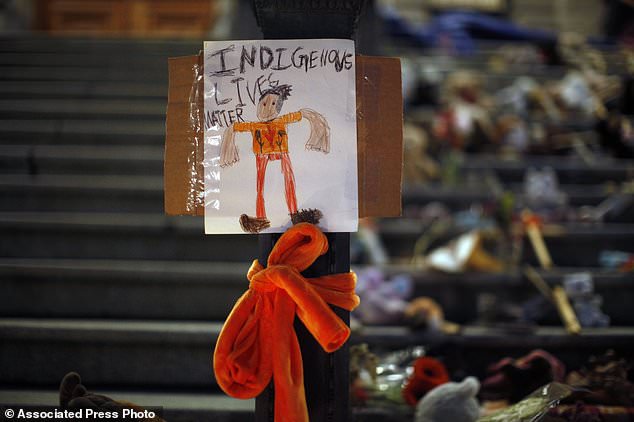 A sign reading ‘Indigenous Lives Matter’ is taped to a lamp post in front of a memorial to the victims of Canada’s residential school system made up of shoes, teddy bears, orange shirts and other tributes placed on the steps outside the legislature 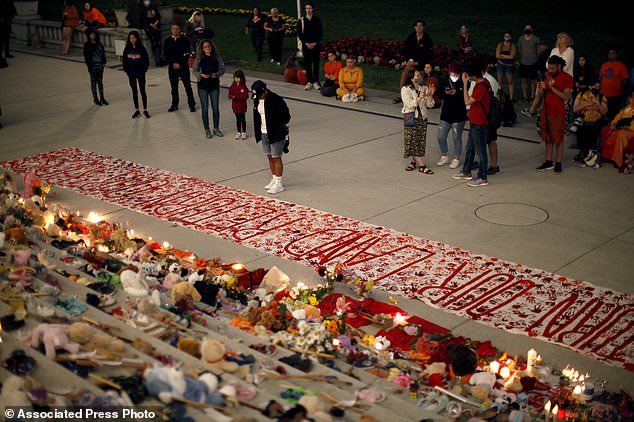 People pay respects to the victims of Canada’s residential school system amid shoes, teddy bears, orange shirts and other tributes placed on the steps outside the legislature 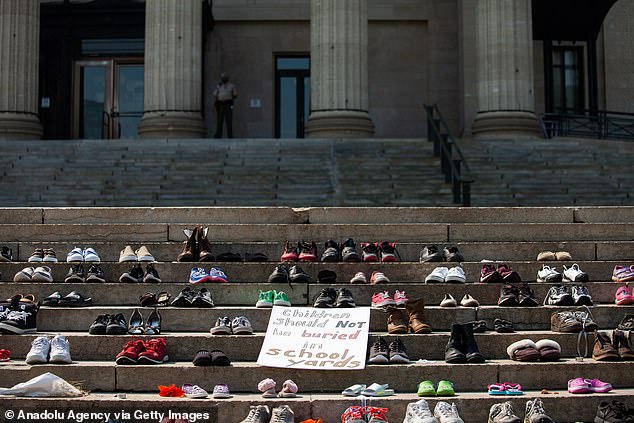 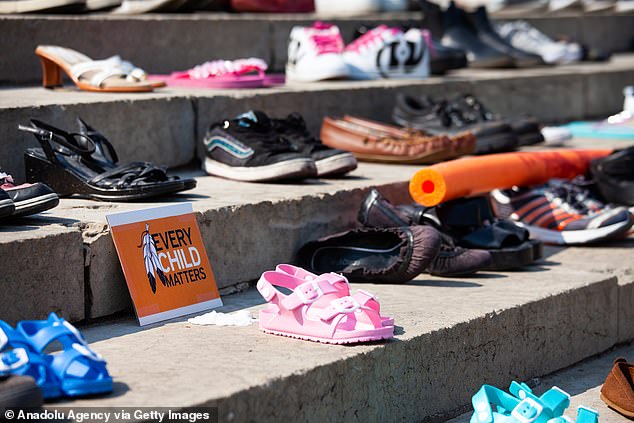 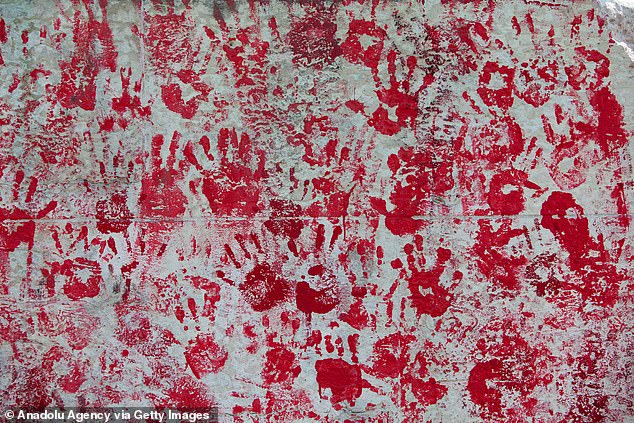 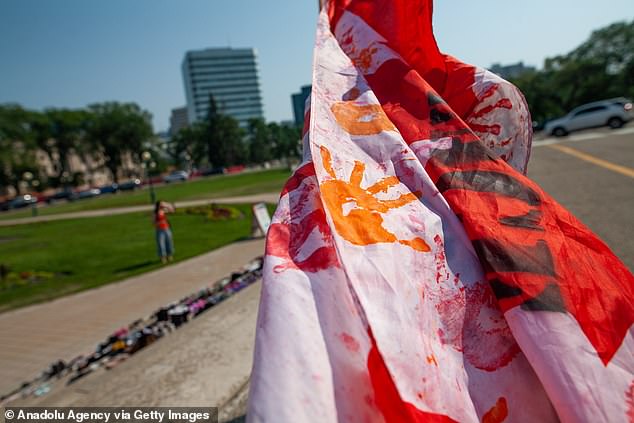 In St. John’s, Newfoundland and Labrador, two prominent buildings and a statue dedicated to the local police force were vandalized with bright red paint.

Earlier this week, a First Nations group in British Columbia said it had used ground-penetrating radar to find 182 human remains in unmarked graves at a site close to a former residential near Cranbrook, 525 miles east of Vancouver.

That followed reports of similar massive findings at two other such church-run schools, one of more than 600 unmarked graves in southern Saskatchewan and another of 215 bodies in British Columbia.

Some 150,000 Indigenous children were forced to attend residential schools, which operated for more than 120 years in Canada. More than 60% of the schools were run by the Catholic Church.

In the United States, monuments to figures now deemed racist or problematic by activists have been removed from sites across the country.

In particular, statues of Confederate figures in the South have been toppled in the wake of the police killing Floyd, which sparked nationwide protests demanding an end to systemic racism.

Statues that paid tribute to the likes of Christopher Columbus, Robert E. Lee and George Washington were among those removed or defaced during anti-racism protests.

While there’s no official number of statues taken down over the last year, the Southern Poverty Law Center previously revealed that 168 Confederate symbols were removed in 2020, including 94 monuments.

As many as 40,000 Native American children may have died from care at government-run boarding schools around the US, a researcher has claimed, prompting a federal investigation to address the trauma’s ‘intergenerational impact.’

US Interior Secretary Deb Haaland said in a June 22 memo that her department will prepare a report that identifies federal boarding school facilities, map out the locations of known and possible student burial sites, and learn the identities and tribal affiliations of the children.

In her memo, Haaland – a member of the Laguna Pueblo tribe and first Native American Cabinet Secretary – said most indigenous parents could not visit their children at these schools, where some were abused, killed and buried in unmarked graves.

‘Survivors of the traumas of boarding school policies carried their memories into adulthood as they became the aunts and uncles, parents, and grandparents to subsequent generations,’ Haaland wrote in her memo.

‘The loss of those who did not return left an enduring need in their families for answers that, in many cases, were never provided. Distance, time, and the scattering of school records have made it more difficult, if not impossible, for their families to locate a loved one’s final resting place and bring closure through the appropriate ceremonies.’

That’s why she’s directing the Department of the Interior to undertake this investigation and address the ‘intergenerational impact’ of Indian boarding schools ‘to shed light on the traumas of the past.’

‘While it may be difficult to learn of the traumas suffered in the boarding school era, understanding its impacts on communities today cannot occur without acknowledging that painful history,’ she said.