A ‘cannibal’ solar flare triggered a spectacular Northern Lights show across Northern parts of the United States on Wednesday, with the hues seen as far south as California and Connecticut.

It came as the result of three outbursts from the sun, called coronal mass ejections (CMEs), since Monday. The third outburst overtook the two previous CMEs to become a ‘cannibal’ solar flare and ‘ate’ it.

Its turbocharged energy resulted in the colorful nighttime display, which happens as a result of electrons colliding with the Earth’s thin upper atmosphere.

The flare reached the earth’s magnetic field on Wednesday resulting in a level 3 – out of a 5 point scale- geomagnetic storm. The storm resulted in a stunning show of the Northern Lights from Washington to Maine.

Friday’s beautiful storm was even seen in some parts of California and Connecticut, whose latitudes are normally too far south to catch the displays.

The outbursts are connected to sunspots, which are magnetic storms on the sun’s surface. 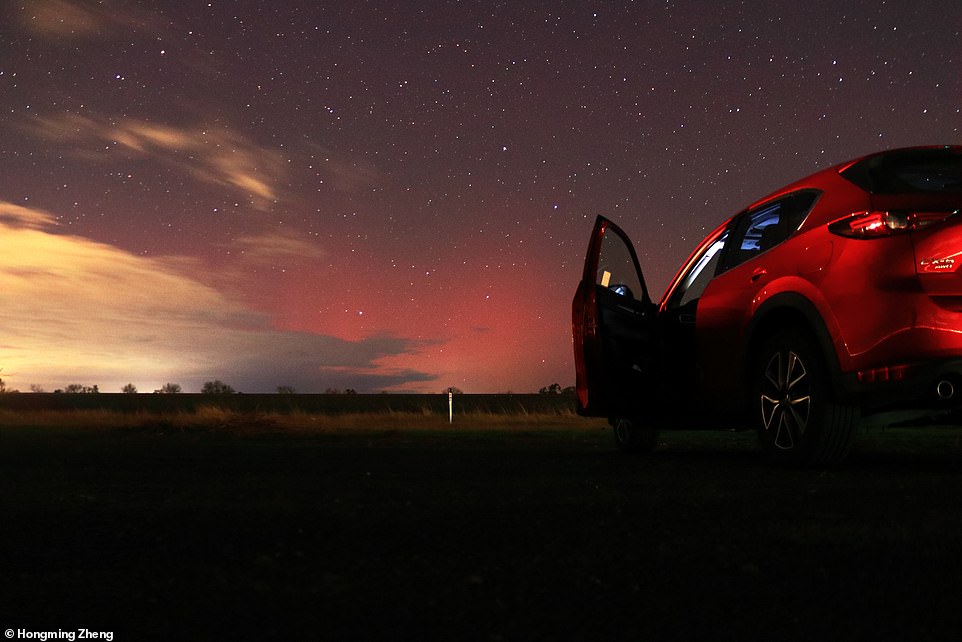 Hongming Zheng captured the stunning scene of the Northern Lights in Lincoln, California on Wednesday, November 4 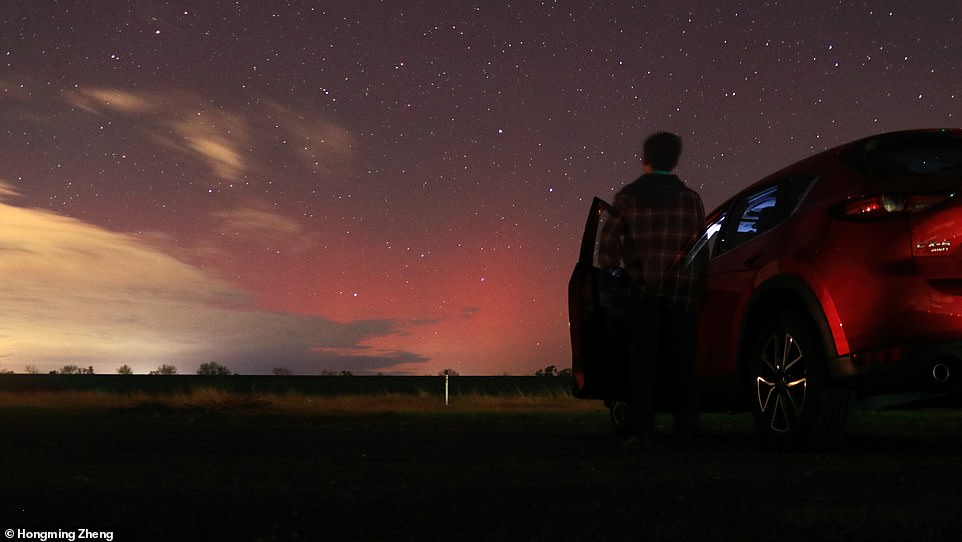 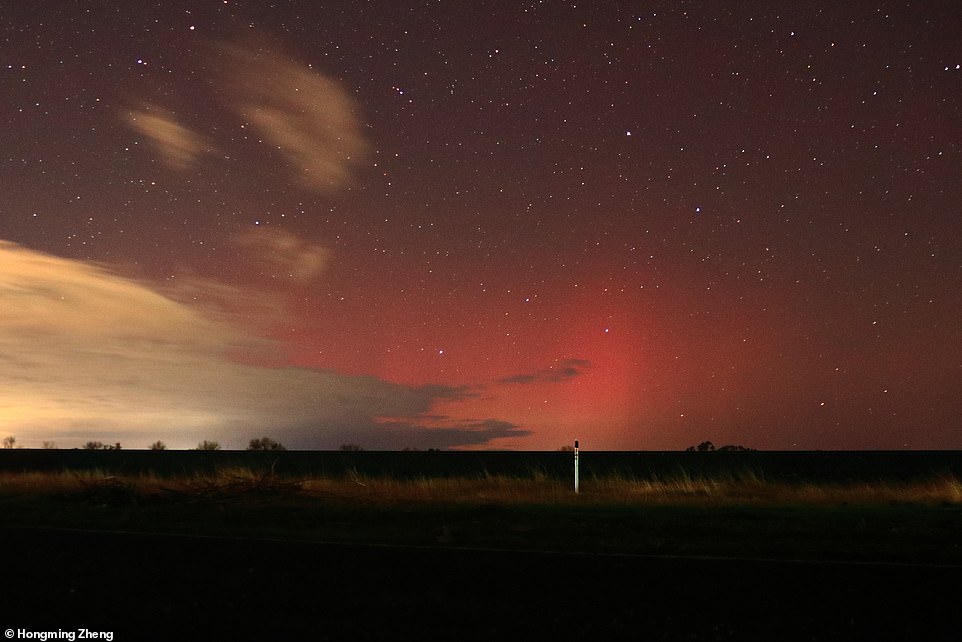 The beautiful display was only seen for a few minutes Wednesday night , as is common for the Northern Lights 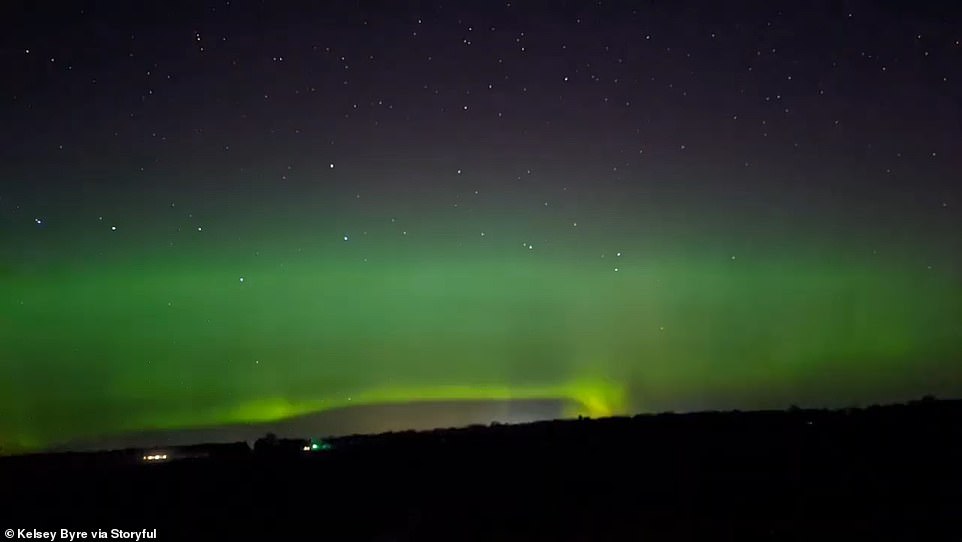 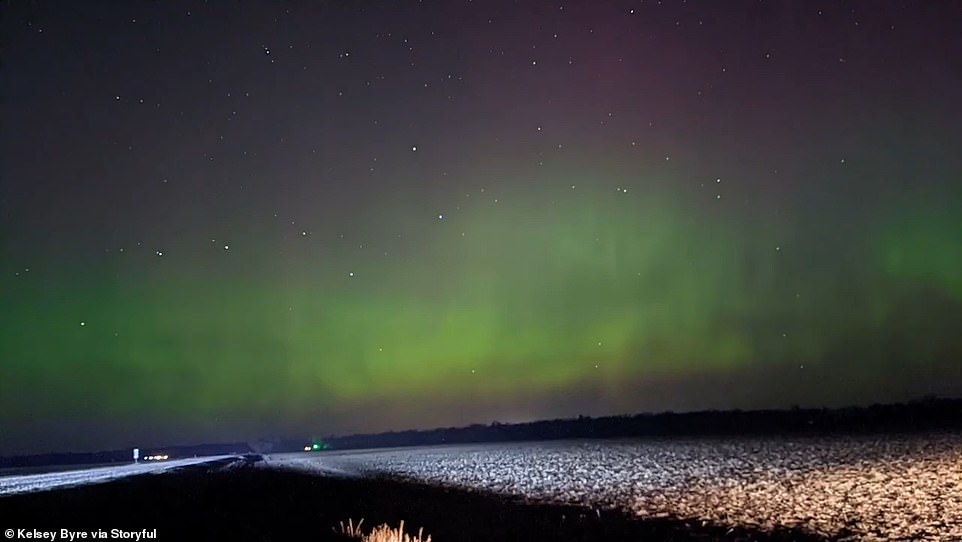 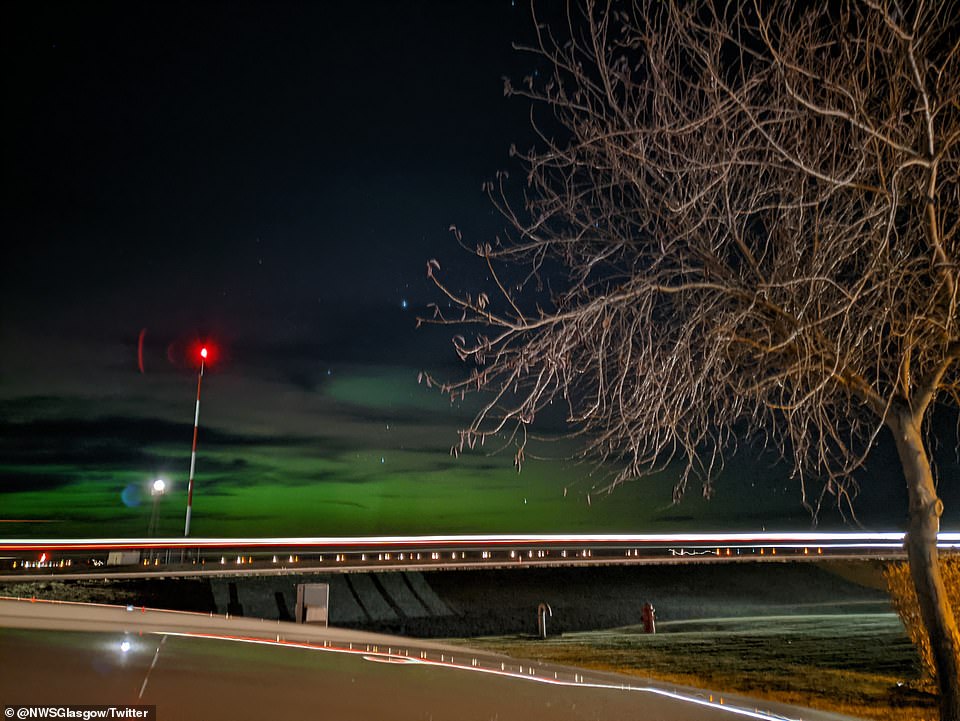 Photographer Hongming Zheng captured the Northern Lights as they illuminated the sky in stunning shades of red as south as Lincoln, California.

Solar flares bring an influx of electrons that interact with the oxygen and nitrogen in Earth’s magnetic field surrounding the planet. In turn, this produces the colorful waves of the aurora borealis – the scientific term for the Northern Lights.

The sun’s activity is tracked in an 11-year cycle. The sun is currently in ‘solar cycle 25,’ which scientists expect to peak in the summer of 2025.

‘The last several years really we’ve had very little activity, as is the case during solar minimum, but now we’re ramping up and ramping up quite fast into the next solar cycle maximum, which we expect in 2025,’ Bill Murtagh, a program coordinator at the Space Weather Prediction Center (SWPC) of the National Oceanic and Atmospheric Administration (NOAA), told Space.com.

‘We’re seeing the increase in activity that one would expect with this rise in the solar cycle,’ Murtagh said. ‘This is kind of our awakening phase.’

He explained the CMEs as ‘a billion-ton cloud of plasma gas with magnetic fields’.  ‘So the sun shot a magnet out into space and that magnet made the 93-million-mile transit from the sun to the Earth.’ 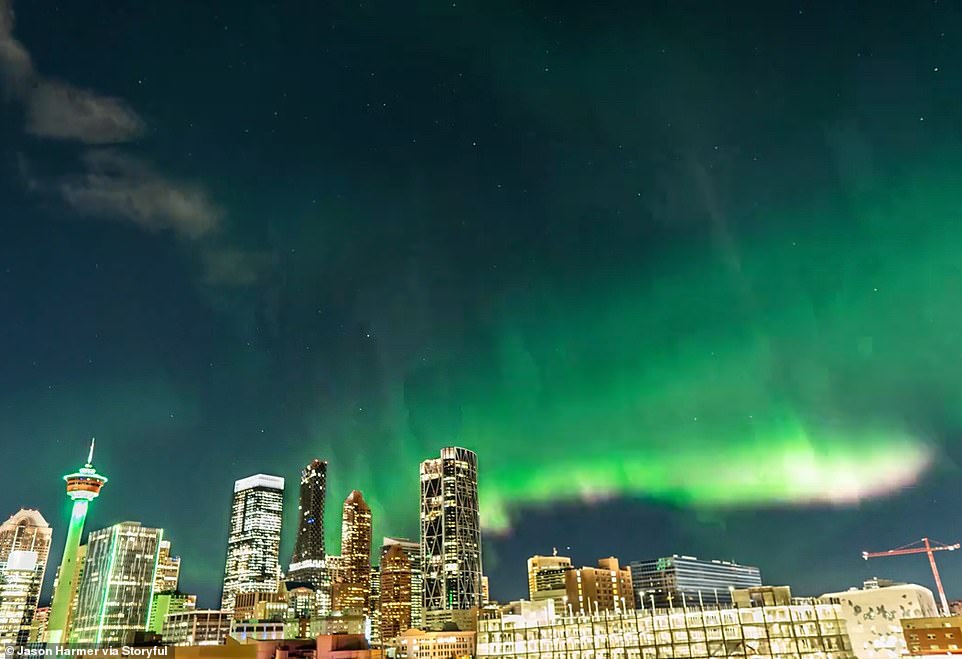 While the Northern Lights are typically easier to spot in dark remote locations, the lights this week were strong enough to dazzle over the bright city skyline in Calgary, Alberta, Canada 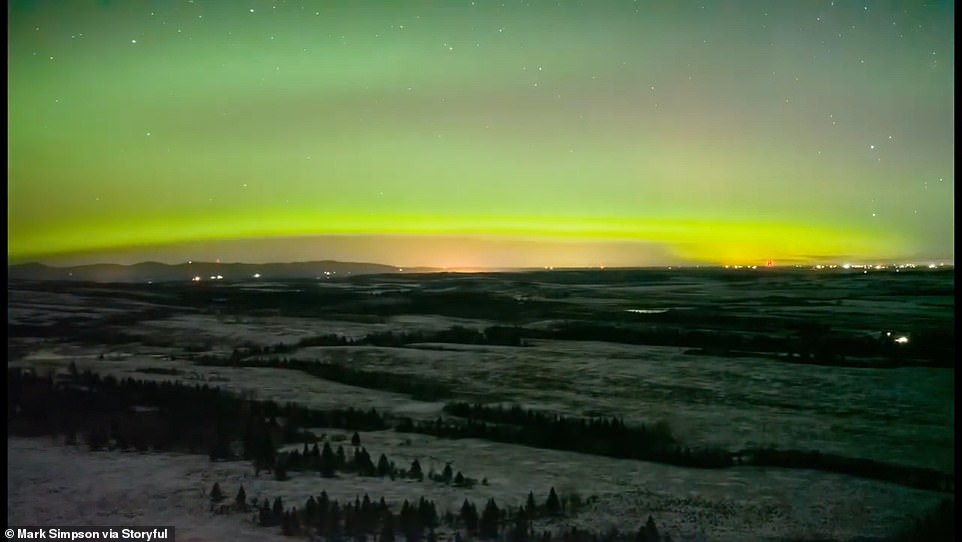 Drone footage recorded the moment orange, yellow, and green light from the aurora borealis shimmered in the Alberta sky 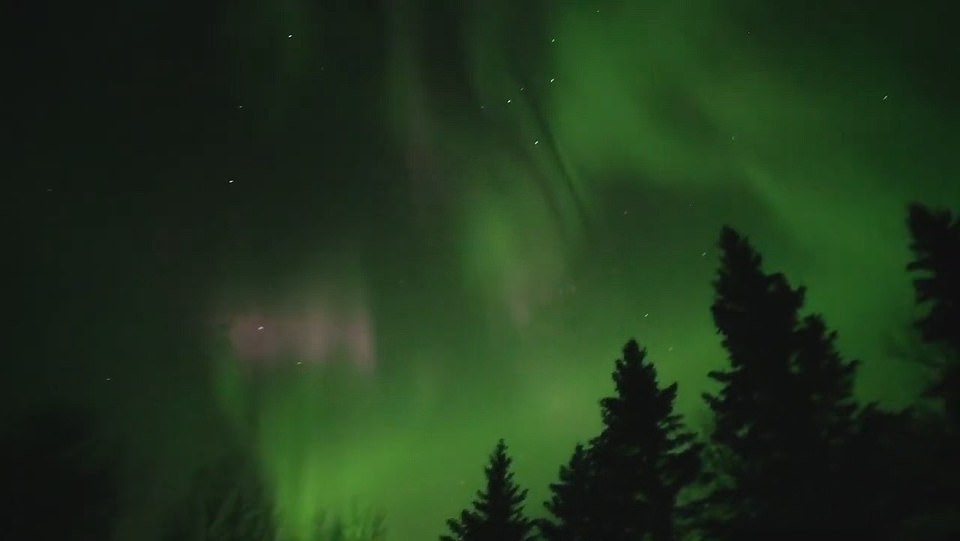 Bright colorful lights were recorded dancing in the dark sky above  Manitoba, Canada putting on a beautiful display 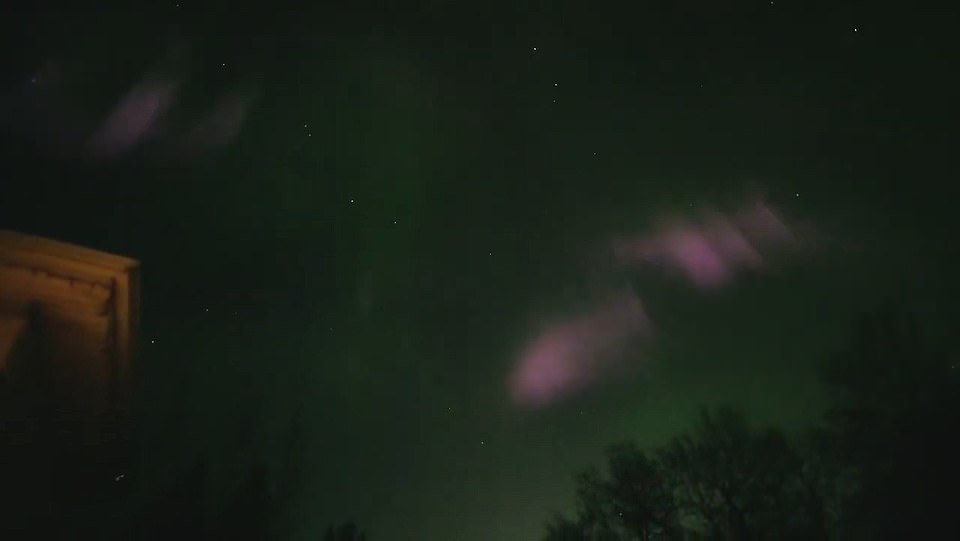 Pink and green lights flashed among the stars in Manitoba, Canada this week as three solar flares traveled to Earth’s orbit

The first two CMEs essentially cleared the path for the third CME which ‘cannibalized’ the previous two to travel the 93-million-mile to reach Earth’s orbit.

Dr. Mark Conde, a physics professor with the University of Alaska Fairbanks, explained the phenomenon to Fox News.

‘Most likely, neither (CME) would, by themselves, have ejected enough material to produce more than a moderate disturbance at Earth,’ Conde said. ‘But in this case, the blast front ejected by the second flare was traveling to Earth faster than the material shot out by the first flare – so it over-ran the expanding front of material from the first flare.’

Conde explained the third CME became a ‘Cannibal’ solar when it caught up to Sunday’s flare ‘and sort of (ate) it.’ 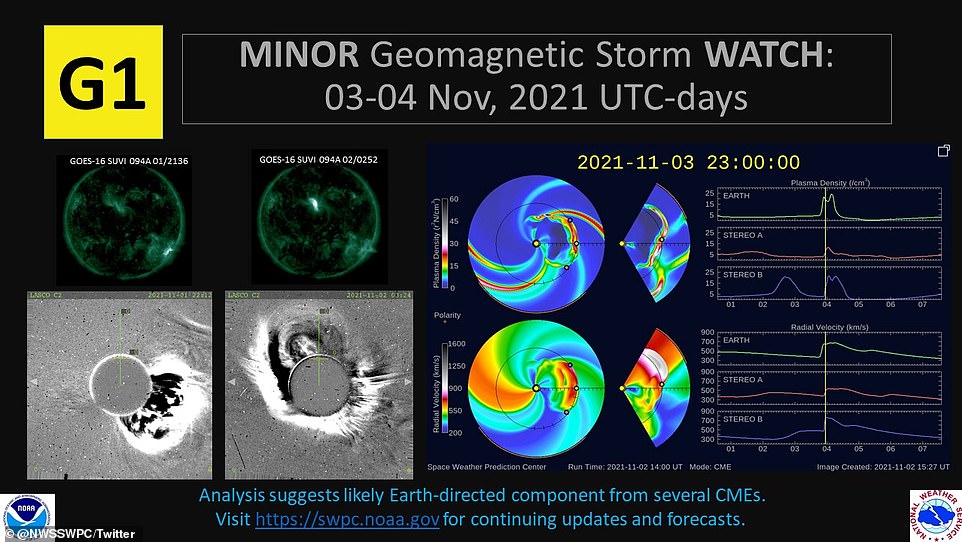 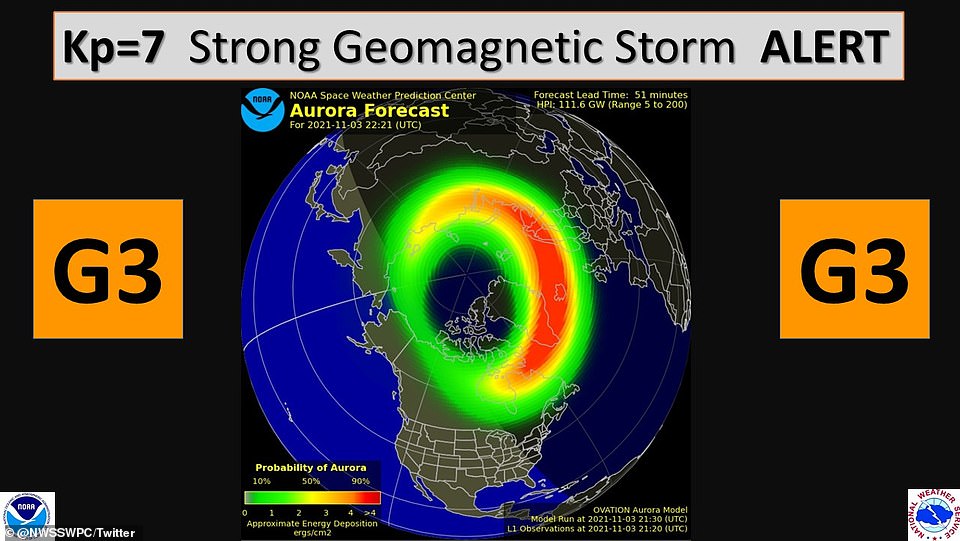 ‘The two combined to produce a much bigger effect at Earth than either CME would have done alone.’ The combined flares hit the Earth at 1.8 million mph, which is nearly triple the average speed that CME travels under calm conditions, according to Fox News.

A CME can grow as it travels through space depending on the size of the CME and how the two magnetic fields align.

Murtagh explained that scientist are able to model how a CME will travel but only after the magnetic field is measured once the outburst reaches the Deep Space Climate Observatory (DSCOVR), a NOAA spacecraft which hovers a million miles from the Earth towards the sun.

At that point, the geomagnetic storm is typically about 20 to 30 minutes away from hitting the earth.

These types of storms have happen hundreds of times but they can impact crucial infrastructure, including power grids, navigation satellites, and airplane radio communications in remote areas.

The Northern Lights are a natural astronomical phenomena known as polar lights or their scientific name, aurora polaris.

The scientific name for the Northern Lights specifically is aurora borealis.

Polar lights are dancing curtains of colored light which is sometimes visible in the dark night sky.

Sten Odenwald, author of The 23rd Cycle: learning to live with a stormy star, explains the beautiful phenomena in his book:

‘The origin of the aurora begins on the surface of the sun when solar activity ejects a cloud of gas. Scientists call this a coronal mass ejection (CME). If one of these reaches earth, taking about 2 to 3 days, it collides with the Earth’s magnetic field. This field is invisible, and if you could see its shape, it would make Earth look like a comet with a long magnetic ‘tail’ stretching a million miles behind Earth in the opposite direction of the sun.

‘When a coronal mass ejection collides with the magnetic field, it causes complex changes to happen to the magnetic tail region. These changes generate currents of charged particles, which then flow along lines of magnetic force into the Polar Regions. These particles are boosted in energy in Earth’s upper atmosphere, and when they collide with oxygen and nitrogen atoms, they produce dazzling auroral light.

‘Aurora are beautiful, but the invisible flows of particles and magnetism that go on at the same time can damage our electrical power grid and satellites operating in space. This is why scientists are so keen to understand the physics of aurora and solar storms, so we can predict when our technologies may be affected.’

The stunning colors and patterns of the lights comes from the types of ions or atoms that are energized as they collide with the atmosphere and react to the different magnetic fields.

They are most commonly seen closer to the North Pole in places like Antartica, Canada, Alaska, Iceland, Greenland, Norway, Sweden and Finland.

The Northern Lights are most active for a few minutes around the equinoxes in March and September between 5:00 pm and 2:00 am.