Cheating husband is caught out by SPEED CAMERA: Unsuspecting German wife is sent a traffic fine with photo evidence… and realises it is ANOTHER woman driving hubby’s car

A cheating husband has been caught out by a speed camera after his unsuspecting wife was sent a traffic fine with photo evidence of another woman driving.

The German woman, 36, who didn’t even have a driver’s licence at the time, appeared before Düsseldorf district court yesterday.

She allegedly broke the speed limit while driving through the Rheinufer Tunnel in Düsseldorf, Germany. 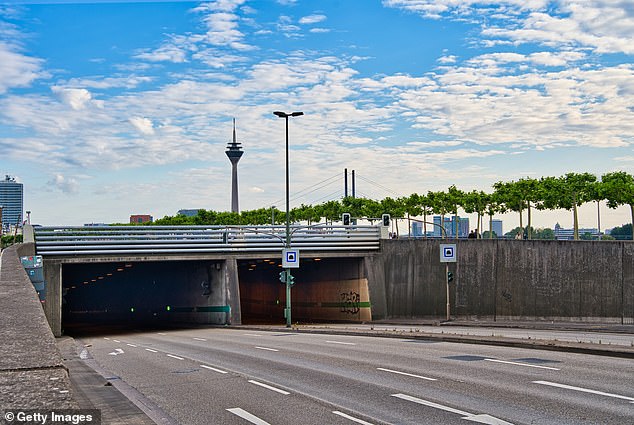 The German wife, 36, who didn’t even have a driver’s licence at the time, appeared before Düsseldorf district court yesterday. Pictured: Rheinufer Tunnel in Düsseldorf, Germany

However, it was later discovered that she was not the woman in the speed camera photo in her husband’s leased BMW, Bild reported.

Fatma Poyraz-Devrim, the lawyer for the accused, said: ‘My client opened the notice of the fine at home. She drove in Rheinufertunnel 87 instead of the permitted 60 kilometers per hour.

‘In the photo, she sees a woman at the wheel of her husband’s leased company car and is startled. She didn’t even have a driver’s licence at the time.’

According to Ms Poyraz-Devrim, the woman who appeared in the speed camera photo and was not able to attend court had vanished abroad, along with the BMW.

The husband, who lent the car to the said woman, has since confessed to the affair.

The woman was acquitted by the judge as it was determined there was little resemblance between the woman in the photo and the one on trial.