One Chicago police officer died and another was critically wounded Saturday night after a confrontation on the city’s South Side, according to reports.

The officers were shot during a traffic stop in the West Englewood neighborhood. They returned fire and struck one of three suspects, the Chicago Sun-Times reported. That male suspect was hospitalized and another male suspect was taken into custody.

A third suspect, a woman, fled the scene but was arrested Sunday morning, FOX 32 of Chicago reported.

The three suspects were undergoing questioning and were not yet formally charged, police said, according to the station.

The suspect who was shot was believed to have been the gunman, and police recovered a weapon at the scene, FOX 32 reported.

A large group of Chicago police officers gathered overnight outside the University of Chicago Medical Center, where the two wounded police officers were transported. One of the officers, a 29-year-old woman, later died there, the Cook County medical examiner’s office told the Sun-Times.

“Obviously our hearts ache for the loss of life,” Mayor Lori Lightfoot said, according to the Sun-Times.

The officer was the first fatally shot in the line of duty since Lightfoot took office in 2019, the Chicago Tribune reported. Four other officers died from the coronavirus, according to the newspaper.

“We ask the city of Chicago to pray for both officers, their families and their fellow officers who are struggling with the facts of this,” First Deputy Superintendent Eric Carter told reporters, according to the Sun-Times. “It’s just another example of how the Chicago Police Department and these officers put their lives above that of others to protect this city day in, day out.”

Chicago police Superintendent David Brown was out of town Saturday, the Sun-Times reported.

Dozens of police officers responded to the crime scene at 63rd Street and Bell Avenue soon after the shooting, while a police helicopter flew overhead, the Sun-Times reported. 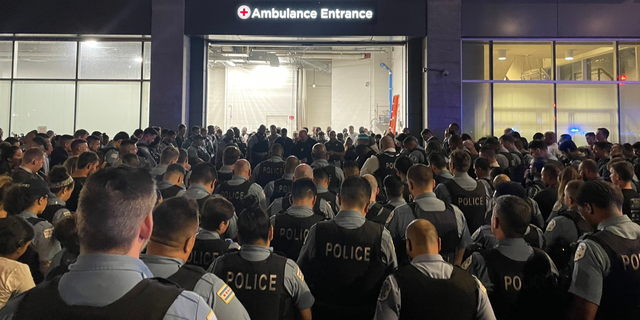 Chicago police officers gather overnight outside the University of Chicago Medical Center, where one officer died and another remained hospitalized after Saturday’s shooting incident. (Chicago Police)

The shooting occurred around 9 p.m., FOX 32 of Chicago reported.

The wounded suspect was taken to Advocate Christ Medical Center, according to FOX 32.