Chinese nuclear plant 'is leaking and could turn into disaster'

A Chinese nuclear power station is leaking radioactive gas and could become a major disaster, according to secret US intelligence reports.

Taishan Nuclear Power Plant, located in southern Guangdong province, is thought to have been leaking for at least two weeks after a French firm that co-owns the facility flagged the issue to Washington.

American agents have spent the last week monitoring the situation and have concluded it has the potential turn into a major disaster but that facility is not currently at ‘crisis level’.

That is in stark contrast to the message being put out by the power plant’s Chinese state owners, who insisted in a report published Sunday that everything is ‘normal’. 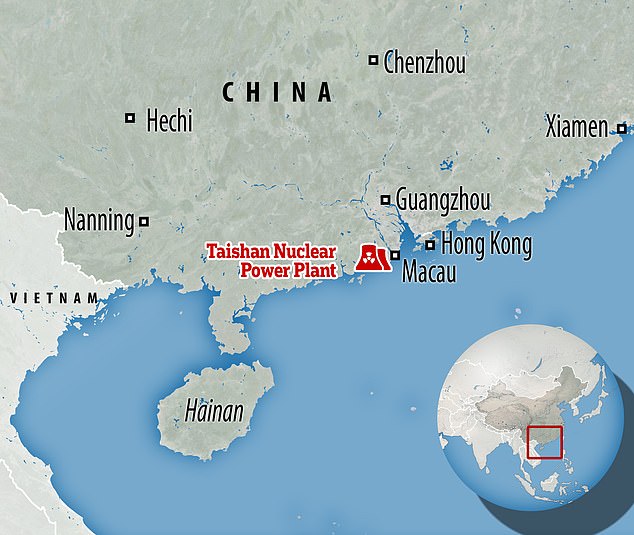 Taishan Nuclear Power Plant, in southern China, has been leaking radioactive gas for two weeks and is at risk of becoming a disaster, US intelligence agencies have privately warned

Problems at the power plant first came to light in late May when French firm Framatome reached out to US intelligence agencies to alert them of it, according to documents sent to the Department of Energy and seen by CNN.

A follow-up memo sent on June 3 identified the issue as a ‘fission gas leak’ and asked for the DoE to share intelligence that might help solve the issue.

Fission gas is a radioactive biproduct of nuclear fission, where heavy atoms are split into lighter ones – a process which releases energy but also creates the waste gas.

Framatome apparently got no response and so sent another memo on June 8 asking for their message to be urgently reviewed.

In that note, they described the problem as ‘an imminent radiological threat to the site’ and warned that Chinese regulators had increased the ‘safe’ levels of radioactivity allowed around the plant.

Increasing the ‘safe’ limit means China has been able to keep the plant running instead of shutting it down to resolve the issue.

Framatome claimed China more-than doubled the limit, and that the new limit exceeds the current safety standards in France.

The June 8 memo was picked up by the US State Department, setting off a flurry of activity over the last week that included meetings of senior figures on the National Security Council to assess the threat.

They concluded that while the plant could turn into a major disaster, they believe it is not in immediate danger of becoming one and it is more likely the issue will be resolved without seriously endangering the public.

It is not clear from CNN’s report whether the intelligence agencies shared the information that Framatome were seeking.

The French firm openly acknowledged the problem on Monday, saying they are working to fix a ‘performance issue’ at the site.

Meanwhile French energy giant EDF also put out a statement on Monday, saying there has been an increase in noble gases detected in the plant’s cooling system.

Noble gases are one of the biproducts of nuclear fission, and their presence in the cooling system may indicate a leak in the reactor.

EDF insisted the presence of noble gases in the cooling system ‘is a known phenomenon, studied and provided for in the reactor operating procedures.’

The operator of the power station, state-owned China General Nuclear Power Group, said in a statement on Sunday evening that ‘the environmental indicators of Taishan Nuclear Power Plant and its surroundings are normal’. 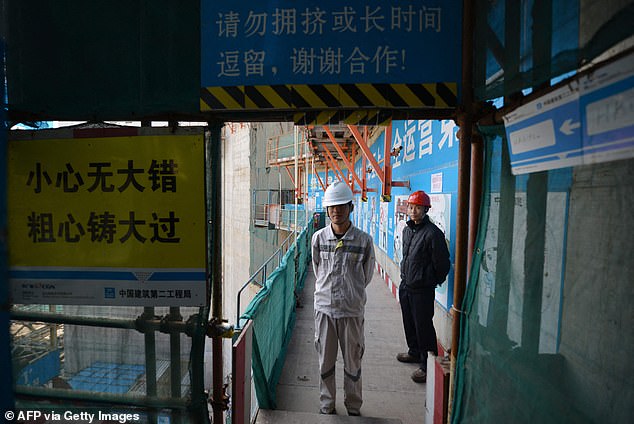 Powered up in 2018, the Taishan plant was the first worldwide to operate a next-generation EPR nuclear reactor, a pressurised water design that has been subject to years of delays in similar European projects in Britain, France and Finland.

EPR reactors have been touted as promising advances in safety and efficiency over conventional reactors while producing less waste.

The plant’s state owners said one of the two reactors on site then completed an ‘overhaul’ and ‘successfully connected to the grid on June 10, 2021.’

It did not say why the reactor was overhauled or what exactly had been done to it.

Nuclear plants supplied less than five percent of China’s annual electricity needs in 2019, according to the National Energy Administration, but this share is expected to grow as Beijing attempts to become carbon neutral by 2060.

China has 47 nuclear plants with a total generation capacity of 48.75 million kilowatts — the world’s third highest after the United States and France — and has invested billions of dollars to develop its nuclear energy sector.