Get back to the office… we’re watching you: Civil servants warned their passes will be tracked to make sure they come in to Whitehall (as Bank of England staff STILL WFH four days a week)

Treasury staff have been warned their passes will be tracked to make sure they come into the office as part of the latest attempt to force civil servants back into Whitehall.

Chancellor Rishi Sunak, who leads the department, has made it clear he expects his officials to be in the office at least some of the time, but has not yet dictated a minimum.

Meanwhile, it has emerged the Bank of England is only requiring its employees to be in the office one day a week – demonstrating the uphill battle facing ministers who have been trying to persuade mandarins to kick their WFH habit. 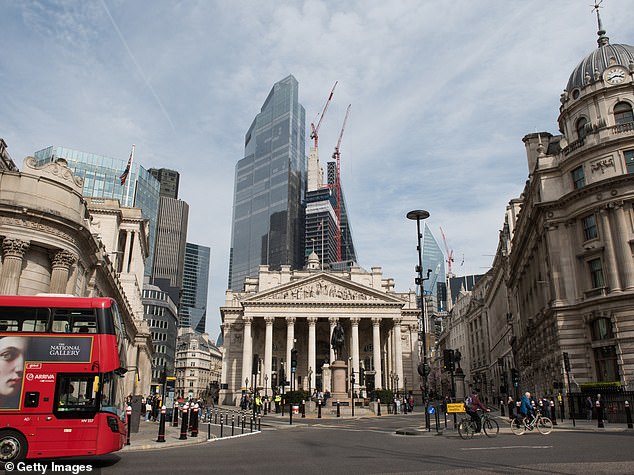 The Bank of England is only requiring its employees to be in the office one day a week, it also emerged today

The Treasury is believed to be the only department to announce it will monitor its staff using their security passes, the Telegraph reported.

Although it says it has seen a ‘significant increase’ in office occupancy, it appears to have accepted many staff will continue on a hybrid model – with job adverts for senior roles stating that applicants would be required to come in between 40 and 60 per cent of the time.

Meanwhile, the Bank of England is planning to increase the amount of time staff are required to come in to 40 per cent from next month, with plans to eventually increase this to 50 per cent.

Catherine Mann, who is on the Bank’s monetary policy committee, said last year that videos were unable to replicate the spontaneous office conservations that were important for securing recognition and advancement.

She warned women risk hurting their careers if they continue to work remotely while others return to the workplace.

City regulator the Financial Conduct Authority (FCA) is also experiencing low office occupancy rates, and is trialling a ‘hybrid working’ model until August that requires staff to be in the office just two days a week. 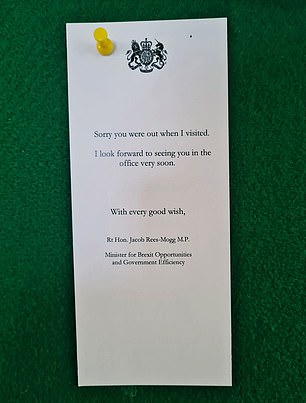 Jacob Rees-Mogg, who serves as minister for Whitehall efficiency, has been leading the government’s WFH campaign – even leaving notes on civil servants’ desks when they are out of office

Jacob Rees-Mogg, who serves as minister for Whitehall efficiency, has been leading the government’s WFH campaign – even leaving notes on civil servants’ desks when they are out of office.

They read: ‘Sorry you were out when I visited, I look forward to seeing you in the office very soon.’

Last month, Mr Rees-Mogg published a league table of Government departments based on how many staff were present and wrote to all Secretaries of State to say they must send a ‘clear message to civil servants in your department to ensure a rapid return to the office’.

He says that even within the Cabinet Office, ‘the disparity is stark’, with some teams boasting ‘an attendance rate of 180 per cent of staff compared to desks, while others are at 6 per cent’.

Mr Rees-Mogg recently implied that civil servants based in the capital could see their London weighting pay subsidies scrapped if they do not return to work for the majority of the week.

According to calculations by the TaxPayers’ Alliance pressure group, removing the subsidy – which is awarded to offset the higher cost of living in the capital – from those who work from home three days a week or more would save up to £250 million.

If such a move was imposed, it would affect many working at the Home Office, the Ministry of Justice, the Cabinet Office and the Department for Work and Pensions, who are currently being asked to go into the office for just two days a week.

The Cabinet Office last night insisted that the estimate was too high because more London-based civil servants are going into work for the majority or all of the time. But Tory MPs welcomed the idea. 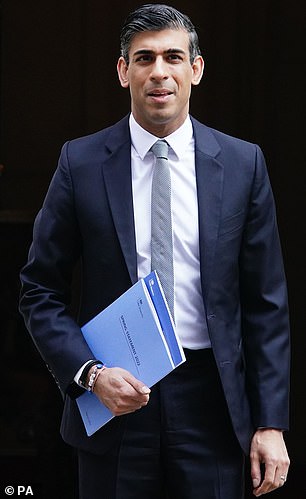 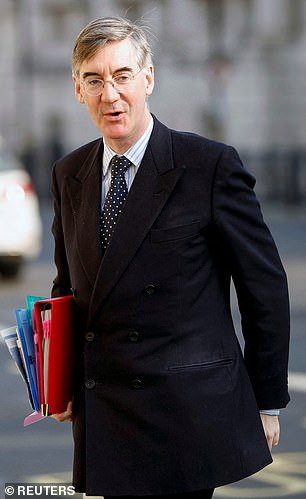 Chancellor Rishi Sunak – who leads the Treasury – and Mr Rees-Mogg, who is the minister in charge of ‘government efficiency’

Sir Iain Duncan Smith, MP for Chingford and Woodford Green, said: ‘If they simply refuse to come back to work for the majority of the week surely London weighting should be removed. They are paid to come into work, and if they are not, they should not get that money.’

Danielle Boxall, media manager at the TaxPayers’ Alliance, said: ‘Taxpayers facing a cost of living crisis want to know they are getting value for money from the Civil Service. If mandarins insist on going remote long-term, officials must make savings.’

A government spokesman said: ‘The Prime Minister and Cabinet Secretary have been clear they want to see office attendance across the civil service consistently back at pre-pandemic levels and we are seeing significant increases in occupancy which continues to be closely monitored.

‘There is total agreement across government on there being clear benefits from face-to-face, collaborative working and we know that this is particularly important for the learning and development of new and junior members of staff.’