‘Coal, cars, cash, trees’: Boris Johnson sets out climate priorities insisting it is CHEAPER to act now amid fears over cost of green agenda – as it’s revealed homeowners could get £4,000 grants to replace gas boilers

Boris Johnson has insisted that taking action to tackle climate now is far cheaper’ amid claims his green drive will hit poorer Britons in the pocket.

The Prime Minister used a social video video last night to back his targets – including making the UK ‘net zero’ in terms of emissions by 2050.

Critics have warned that that target could cost £1.4trillion and a senior minister admitted yesterday that families will bear some of the cost.

Among the plans in place are banning the sale of new petrol and diesel cars from 2030 and scrapping gas boilers in just four years’ time.

It came after a new UN climate report painted a bleak picture of the future without immediate action.

In the video, Mr Johnson said: ‘It’s far cheaper and more effective to act now to avoid incalculable (environmental) damage in the future, and economic (damage) as well.

‘Here in the UK we have proved we can do it, we have halved emissions in the last three decades, even though our country has grown much richer.’

It came as it was revealed ministers are examining the idea of a £4,000 ‘clean heat grant’ that would help pay for new green boilers from next April. 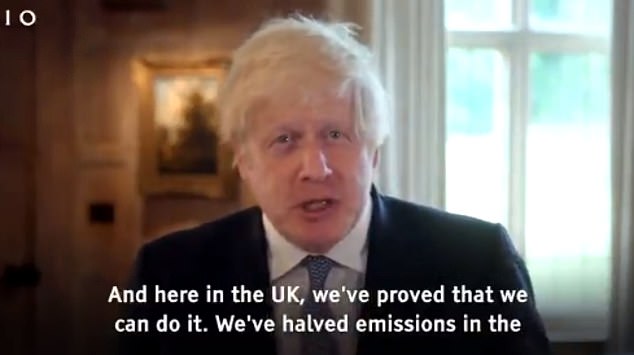 The Prime Minister used a social video video last night to back his targets – including making the UK ‘net zero’ in terms of emissions by 2050. 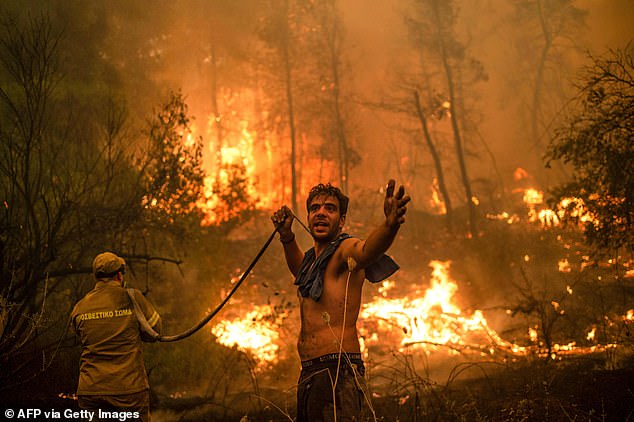 It came after a new UN climate report painted a bleak picture of the future without immediate action. Pictured are people fighting forest fires in Greece this week.

How much will new green projects cost Britons?

Boris Johnson’s green projects could end up costing Britain’s households more than £28,000 each over the coming decade if they are fully implemented.

The Prime Minister is considering a range of eco-friendly policies during his tenure such as a ban on new fossil-fuelled cars including hybrids by 2033.

The Telegraph said it was among options being considered, which include new taxes.

Mr Johnson set out four main areas to focus on:

The pledge has caused fury in Tory circles, with MPs warning that the additional costs will hit lower earners in the Conservative-voting Red Wall. It has also reportedly led to clashes between the Prime Minister and his Chancellor Rishi Sunak.

Kent MP Craig Mackinlay has launched a group to to push back at plans he argues could be could ‘completely kill us off politically’.

He and others argue they will hit poorer voters in former ‘Red Wall’ areas who voted Conservative for the first time in 2019.

Yesterday a major UN climate report put huge pressure on Governments to take more action to cut emissions in the run up to international Cop26 climate talks in Glasgow in November.

The study, which focuses on the physical science of climate change, forms the first part of the IPCC’s sixth assessment report, and is even clearer on the impact humans are having on the planet than the last such analysis in 2013.

It draws on more than 14,000 scientific papers to reach its conclusions and has found it is ‘unequivocal’ that human activity is warming the world.

Rapid and widespread changes to the land, atmosphere and oceans have occurred – from temperature increases to sea level rises – that are unprecedented for many centuries or even many thousands of years.

The report makes clear that human-caused climate change, which has pushed up global temperatures by 1.1C, is driving weather and climate extremes in every region across the world.

There are already more frequent and intense heatwaves and heavy rainstorms in many places, including northern Europe, as well as droughts and cyclones.

Humans are also very likely the main driver in the global retreat of glaciers, declines in Arctic sea ice, and rising sea levels.

Sea level rises are speeding up, with the oceans rising by 3.7mm (0.15 inches) a year in recent years, and are set to continue to rise this century whether emissions remain high or fall dramatically.

Changes to oceans, sea levels and melting permafrost and glaciers are irreversible for decades, centuries or even millennia as a result of past and future warming.

And cities are at particular risk as the climate warms, experiencing hotter temperatures in heatwaves and flash flooding from heavy rain.

The study also warns that unlikely events such ice sheet collapses, abrupt changes to ocean circulation – which drives weather patterns – and much higher warming cannot be ruled out.

But the report, which assesses the potential impact of a range of five future scenarios from very low emissions to very high pollution, highlights the impacts of the choices the world makes now.

Temperature rises have a good chance of remaining below 1.5C in the long term if carbon emissions are cut to net zero by 2050, followed by efforts to take more carbon dioxide out of the air than is put into the atmosphere, along with deep cuts to other greenhouse gases.

But scientists who worked on the report said current pledges of action on emissions put the world on a pathway that could lead to 2.7C of warming by the late 21st century – or higher if the pledges were not delivered on.

Sea levels would rise by around 28-55cm (11-22 inches) by 2100 in a very low emissions scenario, but by significantly more if emissions stayed high.

Every additional 0.5C temperature rise leads to clear increases in the intensity of heatwaves, rainstorms and flooding, and droughts in some regions.