It’s hard not to be cynical about the motivation behind the Australian government’s sudden introduction of new legislation requiring voters for the upcoming federal election to show identification before they cast their ballot.

The Coalition claims that these measures would prevent fraudulent activity by people voting multiple times or under false identities. However, all the evidence from the United States, where similar legislation has been in place in a number of states over the past decade, shows these measures disproportionately affect people of colour, students, older people, and people with disabilities. 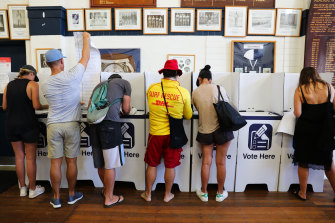 The US experience has shown that a photo ID requirement will likely discourage many thousands from voting at the next federal election.Credit:Janie Barrett

According to the Brennan Centre for Justice, a US-based research organisation, voter “fraud is very rare, voter impersonation is virtually non-existent, and many instances of alleged fraud, are in fact, mistakes by voters or administrators”. Nonetheless, politicians continue to push for a solution to a problem that doesn’t really exist.

In the US these laws, rather than preventing fraud, have resulted in disparate treatment of black, brown, poor, and elderly people, and these laws are more likely to disrupt their right to vote. US studies found that voter ID laws are enforced in a discriminatory manner, and that minority voters are more frequently questioned about their identification than white voters.

The impact of these laws is real, and large numbers of voters are discouraged from participating in the political process when voter ID laws are imposed. A 2014 US government study found that new strict photo ID laws in the states of Kansas and Tennessee led to a reduced voting turnout of 2 to 3 percentage points. It means that 100,000 or more people who might have voted didn’t.

Another study found that, between 2000 and 2014, there were only 31 credible allegations of voter impersonation during a period in which over 1 billion ballots were cast. The same study found that identified instances of “fraud” are almost always the product of an elections worker or a voter making an honest mistake, and that even these mistakes are extremely infrequent.

While the voting systems in the United States and Australia are different, Australia should not replicate these voting ID requirements. Particularly when, like the US, there is no evidence of a problem that needs urgent legislation to fix. The Australian Electoral Commissioner, Tom Rogers, told a Senate committee in March that his staff were satisfied with existing measures to prevent multiple voting, describing the problem as “vanishingly small.”

During the 2019 election, the rate of multiple voting was 0.03 percent, with the Australian Electoral Commission explaining that multiple voting is “by and large a very small problem,” and usually involves mental health issues rather than deliberate fraud. Australia also needs to address its long, shameful history of denying Indigenous Australians the right to vote, and there are real concerns that this legislation could affect First Nations people more than any other group.

According to the Australian Human Rights Commission, Aboriginal and Torres Strait Islander peoples often do not possess a birth certificate and face difficulties obtaining subsequent formal identification. And while declaration votes provide an alternative for people with insufficient identification, many people wish to avoid this hassle, which experts say involves extra forms and delays.

When opposing a similar law in Queensland in 2014, Mick Gooda, the former Aboriginal and Torres Strait Islander social justice commissioner, argued that the declaration process could cause Aboriginal and Torres Strait Islander people to feel “intimidated by the requirements to fill in extra paperwork and being treated differently to other voters”.

Rather than the minuscule instances of multiple voting, the real electoral issue in Australia is that only 79 per cent of Indigenous voters are enrolled to vote, compared with 96 per cent of all eligible Australians. If the Morrison government is so concerned about integrity in the voting system, it should increase efforts to get more First Nations people on the electoral roll.

The potentially discriminatory nature of the voter ID provision even has some government MPs concerned. The parliamentary joint committee on human rights, which is chaired by Nationals MP Anne Webster, recently asked the Special Minister of State to explain how the measures would be effective, saying it was not clear if the bill “may in fact reduce public confidence in the electoral system and discourage some voters from voting because of the perception that they cannot vote if they do not possess adequate identification documents”.

Despite these concerns, it appears that the government will try and push the bill through next week, during the last parliamentary sitting of the year. With the support of Pauline Hanson’s One Nation Party, the voter ID provision could become law if just one crossbench senator votes for it.

Voting laws should strengthen democracy by making it easier to cast a ballot, not harder. Measures that only work to suppress the vote are an assault on democratic rule anywhere in the world.
It is critical Australian members of Parliament and Senators uphold everyone’s right to vote.