The Department of Transport was alerted to a truck striking the bridge at 3.45pm, according to spokesman Andrew Crook. 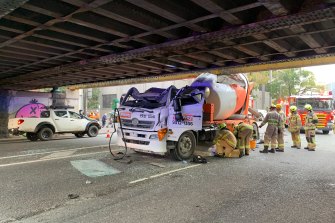 The cement mixer that crashed into Montague Street bridge at South Melbourne on Wednesday.Credit:Nine News

He said tram services along the Montague Street bridge had been suspended, but had since resumed following an inspection for any damage to the structure.

“Southbound lanes of the road are closed and are likely to remain so into the evening,” Crook said.

A spokesperson from Ambulance Victoria said a man in his 40s was taken to the Alfred Hospital in a stable condition with upper body injuries.

With a clearance of just three metres, the Montague Street bridge is among the lowest on Victoria’s traffic network and has been hit hundreds of times.

The standard minimum clearance of a bridge is 5.4 metres.

The bridge is so notorious it even has its own website, which documents statistics such as the number of days since it was last hit.

In February The Age reported that several factors had been blamed for drivers ploughing into it, from a lack of attention to road signs to customers of a nearby rental business not understanding the height of their vehicle.