It was once affectionately known as the global rules-based order. Now we could better call it Fight Club. The US is throwing punches wildly at smaller powers, imposing trade penalties in breach of the global rules. China is grabbing the maritime territories of smaller neighbours and building military bases on them, in stunning disregard of the international order.

"Neither the current occupant of the White House nor of Zhongnanhai is convinced of the merits of the rules based order," says the Lowy Institute head, Michael Fullilove, in measured understatement. Zhongnanhai is Beijing's red-walled leadership compound. 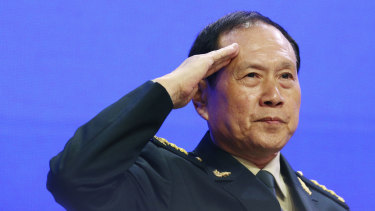 And, not content to hit smaller nations, the two biggest powers increasingly are going at each other. Not only are they directly hitting each other with trade sanctions and bulking up for actual warfare, they are starting to wall off the world economy into competing blocs.

It's not a Cold War, where two separate ideological spheres stand in readiness to annihilate each other. The flow of commerce between the US and China remains the biggest on earth.  But the trend is all one way. Not yet a Cold War but a cooling peace is under way. Quite abruptly, globalisation is a quaint old notion.

Washington and Beijing now move towards a decoupling. It started with telecoms firms Huawei and ZTE but it's widening and accelerating by the day. Each side is beginning to blacklist each other's firms. In the last two weeks, companies in the US, Japan and Germany which supply electronic components or software have been forced to choose to do business with America or China but not both.

They are choosing America. World markets have only just begun to grasp the seriousness of this situation.  Because markets have assumed that, beneath the rhetoric, rational economics would prevail. When Donald Trump said on the campaign trail that "we can’t continue to allow China to rape our country" investors thought it was mere campaign bluster.

Nor did markets take seriously his former chief strategist, Steve Bannon, when he said that Trump was preparing for a "clash of civilisatons". But a few weeks ago we heard a senior diplomat in the US State Department tell a public forum: "This is a fight with a really different civilisation and a different ideology and the US hasn't had that before.”

Kiron Skinner, the director of policy planning, said the State Department was working on a policy document of the scale of the famous "Letter X" of 1947 that set out US Cold War strategy against the Soviet Union. Today, she said, Russia was much the lesser threat, a "global survivor". But of China, she said: "We see it as a more fundamental long-term threat. In China, we have an economic competitor, we have an ideological competitor, one that really does seek a global reach that many of us didn't expect a couple of decades ago."

Said Skinner: "It’s the first time that we will have a great power competitor that is not Caucasian.”
Investors only started to take the situation seriously when Trump imposed one wave of punitive tariffs after another on China, and China retaliated.

Trump and Xi have departed from the cool rationality that gave the world unprecedented peace and prosperity for the past 70 years. Xi rejected the civilisation clash concept as racist: "Thinking that one's own race and culture are superior, and insisting on transforming or even replacing other civilisations is stupid in its understanding and disastrous in practice," he told a Chinese-hosted conference on Asian Civilisations last month. 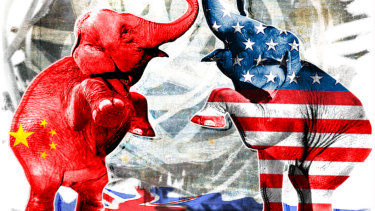 But his regime, too, has engaged nationalism and jingoism. Xi sent his top general, China's Defence Minister Wei Fenghe to deliver a message to a major forum, the ShangriLa Dialogue, in Singapore on Sunday. Speaking of the trade war with Washington, he said: "If they want to talk, we will keep our doors open. If they want to fight, we will fight to the end."

He defended China's burgeoning military budget by citing a line from China's national anthem: "'Arise all those who do not want to be enslaved' – we vow not to give a single inch of our land."

The President himself shows a gentler face to the outside world but doesn't shy away from blunt military talk at home. Whenever he tours Chinese military bases he instructs his troops to "prepare to fight to win".

His regime is gearing for a longer struggle against the US. In the last two weeks the state broadcaster changed its schedule to screen a series of old Chinese propaganda movies about China's glorious fight against American troops in the Korean War. The films pointedly remind everyone that the US did not win that war. 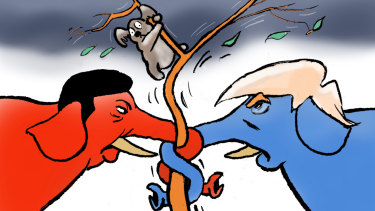 And Xi has toured Chinese rare earth production facilities, an implicit threat to curb Chinese exports and escalate the trade war. China produces some 90 per cent of the world supply of rare earths, essential to computers and electronics of all kinds. Former leader Deng Xiaoping liked to say that "Saudi Arabia has oil; China has rare earths."

This is not rational economics; both sides lose in a trade war. But it is rational politics if a leader's aim is to arouse nationalism to serve his political needs. And nationalism is the essence of Trump's politics: "Make America Great Again."

And of Xi's. His trademark political pitch is the "China Dream of the great rejuvenation of the Chinese nation". Or, paraphrasing, "Make China Great Again."

As the great powers shape up against each other, the lesser ones are overlooked, the rules forgotten. Singapore's Prime Minister, Lee Hsien Loong, on Friday reminded us of something his father liked to say: "When elephants fight, the grass is trampled; when elephants make love, the grass also suffers." Australia, like Singapore, and most nations, risks getting trampled.

While all eyes were on the US and China at the ShangriLa conference on the weekend, the head of Fiji's military, Admiral Viliame Naupoto, got the attention of one of the smaller sessions with this remark: "I believe there are three major powers in competition in our region."

Three? "There is the US, it has always been there, forever. There is China, which has been a loyal friend to many of us. The third competitor is climate change. Of the three, climate change is winning."

It was a poignant reminder that while the big powers position to fight, they overlook the fact that some of the smallest are fighting merely to survive.