Rishi Sunak was wise to avoid apocalyptic rhetoric during his keynote speech to the Cop27 climate conference in Egypt.

In his first foray on to the international stage as Prime Minister, it was important his words were measured, not hysterical.

As a result, his message that all nations should hasten their drive towards net zero carbon emissions to curb global warming hit the right note.

By contrast, UN secretary-general Antonio Guterres’s end-of-the-world pronouncements risked ordinary citizens switching off. ‘We are on a highway to climate hell with our foot still on the accelerator,’ he warned. 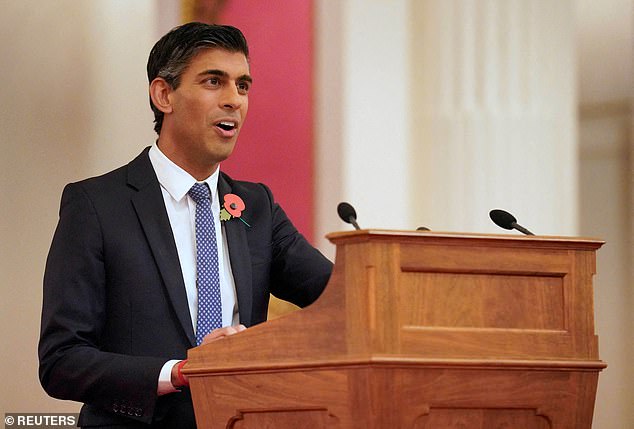 Given Russia’s invasion of Ukraine has strengthened the importance of ending dependence on fossil fuels, Mr Sunak is right to want to turn Britain into a ‘clean energy superpower’.

But to get ordinary people on board, he must be realistic about what we can achieve – and the potential costs.

Britain produces under 1 per cent of the world’s CO2, and has reduced emissions by 45 per cent since the 1990s.

We are one of the only countries in the world to have imposed on its economy a strict, anti-competitive and legally-binding requirement to cut greenhouse gas emissions to zero by 2050 (a process started by Ed Miliband’s ruinous Climate Change Act in 2008).

While China, India and other rivals belch out eye-watering emissions (and are not even at the climate jamboree), signing Britain up to ever more punitive targets would be an act of pure economic hara-kiri.

The naked truth is, we cannot yet meet our energy needs by renewables alone. To keep the lights on, fossil fuels and nuclear must remain part of the mix.

As an environmental good guy, it’s insane we are being urged to pay up to £1trillion in reparations to poor countries suffering the effects of climate change, such as flooding.

Leave aside the fact this is simply unaffordable. To calculate compensation based on historical emissions would be mind-bogglingly complicated. How far back would it go? Who decides who pays? How much?

And industrialisation is hardly a sin. It’s the key factor that has driven up prosperity and living standards all over the world.

If the Tories pay anything more than lip service to such a crazy idea, they are playing a very dangerous game with voters.

When people are struggling to heat their homes in Britain, sending vast sums to the Maldives would be political suicide.

When will the police, the courts and the other authorities wake up and realise that the softly-softly approach will not deter Just Stop Oil from causing mayhem?

Within hours of an injunction being issued to stop the group targeting the M25, protesters had flouted it by scaling the gantries, bringing traffic to a grinding halt.

The right to peaceful protest is of course a fundamental part of our society. But the antics of these sinister cultists go way beyond that. It is wanton criminality.

Never mind saving the planet. Their aim is to punish anyone unwilling to sacrifice their living standards on the altar of eco-austerity – using violence if necessary.

The time has come to hit these anti-democratic anarchists with long jail sentences – not let them walk free to post attention-seeking social media videos from wherever they next wreak havoc.