Ratepayers in Darebin in Melbourne's north have funded rising WorkCover premiums after the council failed to meet industry standards as an employer.

The council’s 2019-2020 annual report, which is yet to be made public, details the budgetary impact of what former staff who spoke on the condition of anonymity have described as a toxic workplace culture. 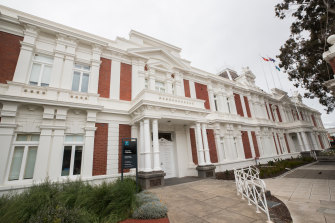 Darebin's insurance premium — the amount the council pays WorkCover to insure for staff injuries or illness as a result of work — has more than doubled in three years to $1.762 million.

Darebin Council’s employer rating was at 2.16 in the previous financial year, the report shows, which is a poor performance against the industry standard of less than one.

Darebin chief executive Sue Wilkinson said WorkCover premiums were based on a range of complex and sometimes external factors.

“They do not reflect the quality of our organisation,” Ms Wilkinson said in a statement.

“Darebin employs a large number of workers in higher risk roles that other councils do not, such as outdoor and homecare workers. These teams often perform manual labour and our premiums reflect that.”

Darebin's WorkCover employer rating has improved in the current financial year to 0.91, which passes the industry standard.

“We are a modern and progressive organisation which celebrates the diversity of our community and our staff. The health and safety of our staff is paramount, and we have a commitment to fairness, equity and inclusion in everything we do,” Ms Wilkinson said.

There were eight WorkCover claims accepted in 2019-20 and seven accepted the year prior.

Mr Bruckner — who was stood down and then sacked last year after a brief argument with a colleague — alleged that Darebin Council was in breach of his contract and the Fair Work Act, and that he had been defamed. The council denied all of the allegations.

Mr Bruckner had sought compensation for humiliation, distress, pain and suffering, reputational damage and loss of income. He also wanted to be reinstated as co-coordinator of civil compliance.

He said staff were also having to prove their fitness to work after taking sick leave, which was putting unnecessary burdens on staff, particularly while they were under extra pressure during COVID-19.

“We find it concerning, the continual pursuit of people who have taken sick leave and the disproportionate number of staff at Darebin who have taken leave because of stress,” Mr Beckley said.

The annual report also shows Darebin Council lost 10.5 per cent of its permanent staff, after a higher staff turnover rate of 14.2 per cent in 18-19.

“Terminations and resignations were higher in [the] previous year due to organisational review,” the report said.

Stonnington Council staff turnover has sat at 14 to 15 per cent for each of the last seven years, the 18-19 report shows. Moreland Council's average turnover rate is closer to 9 per cent, but lost 12 per cent of permanent staff in 18-19.