Leap of faith! Daredevil skis straight off a snowy mountainside to parachute down and land on frozen lake 5,177ft below

This is the heart-pounding moment a daring base jumper leaps from the top of an icy mountain onto a frozen lake before his friend performs the same daring stunt.

The footage, captured by Tim Howell, 28 from Martock, Somerset, shows the former Royal Marine hurtle down an icy slope in Oeschinen, Switzerland, before parasailing across the sky and landing on the Kandersteg frozen lake Ski base 5,177 feet below.

The extreme sports enthusiast, whose good friend Maria Mcfly also performs the dangerous feat moments later, jumps over the edge of the mountain before opening his parachute and shouting: ‘Yes Maria!’ 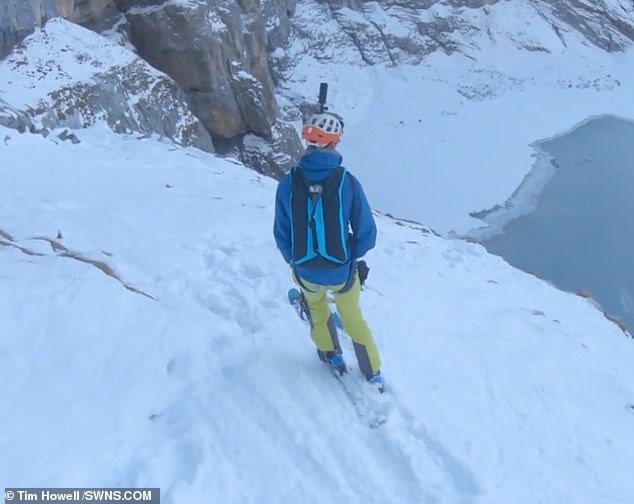 Former Royal Marine Tim Howell, 28, from Martock, Somerset, moves towards the end of the icy mountain in Oeschinen, Switzerland 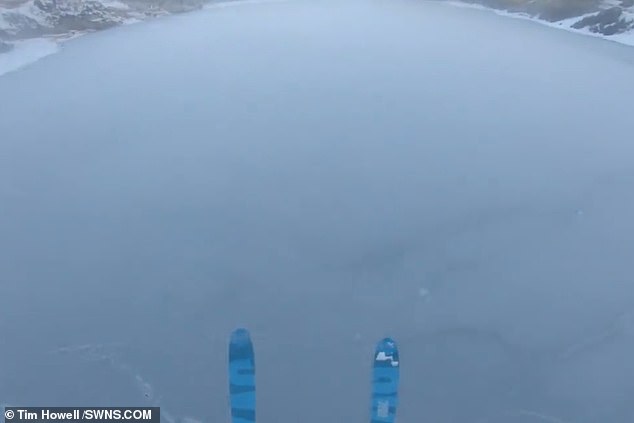 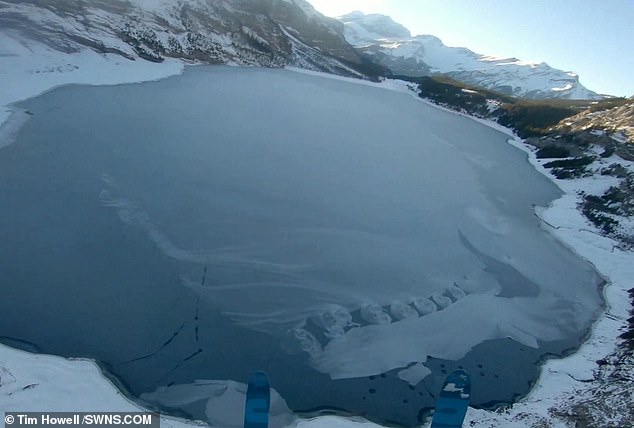 During the clip, which was filmed on January 7, Mr Howell gives his friend a fist bump and reassuringly tells her: ‘See you down there ok.’

He then glides towards the edge of the mountain before releasing his parachute and calling out to his friend waiting to jump from the top of the mountain.

The daredevil then lands on the frozen lake and awaits for Ms Mcfly who edges towards the edge of the slope and takes a leap of faith.

After parasailing her way down to the base of the mountain, Ms Mcfly and Mr Howell ski across the lake and celebrate their extraordinary jumps.

Mr Howell later said: ‘We set out to jump from this well photographed cliff. In the summer it is a very popular area for hiking and swimming.’

‘In the winter the frozen lake is used for ice fishing and ice hockey, so new knew it would be thick enough to land on.’ 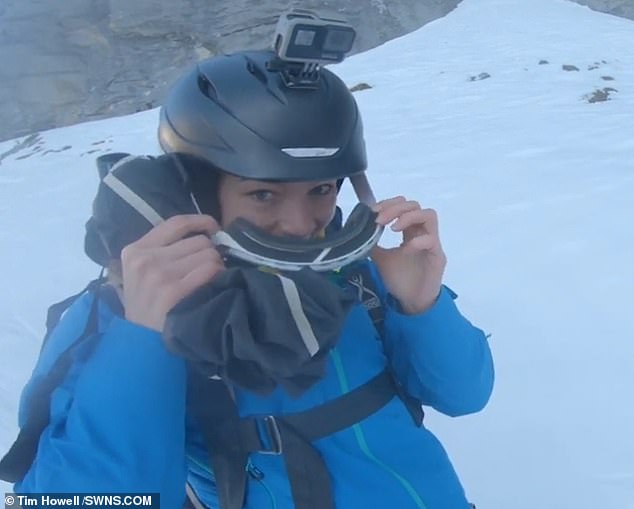 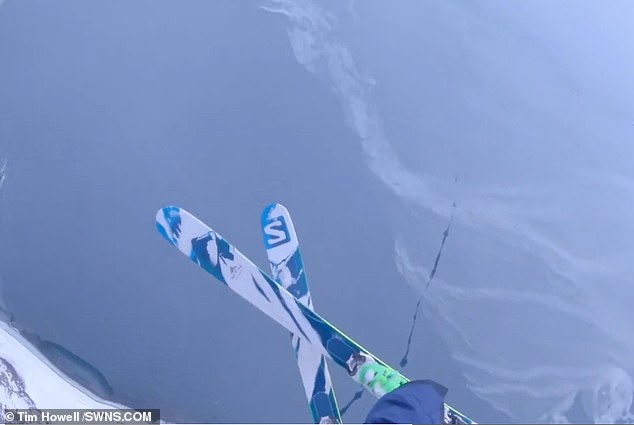 Ms Mcfly takes a leap of faith and jumps over the icy mountain and onto the frozen lake Ski base 5,177 feet below

‘We finally found a part of the cliff that was steep enough and big enough. Landing on the lake was a really odd experience, we skated back to shore over big cracks in the ice.’

Following the jump Mr Howell took to his Facebook page to write: ‘Kandersteg Frozen lake Ski BASE. One of those days where motivation is high, but maybe ambition and the idea is greater then success. (In the way of finding a jump, not falling to our death, haha).

‘Is the lake frozen enough to land on? Is there enough snow on the exit? Can we reach the exit and is it steep enough? 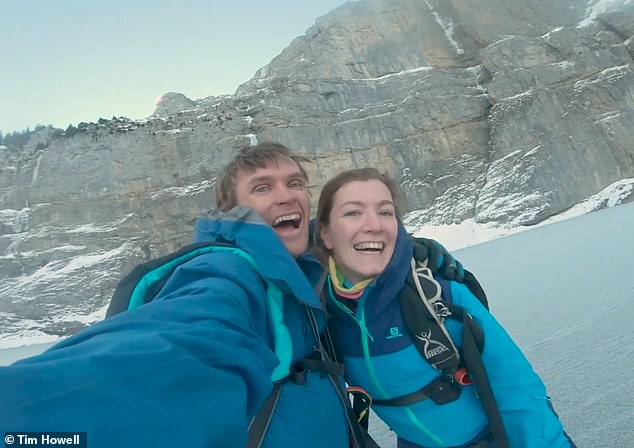 Mr Howell (left), who was joined by his friend Maria Mcfly (right), celebrates their incredible jump over the icy mountain from the Kandersteg frozen lake Ski base 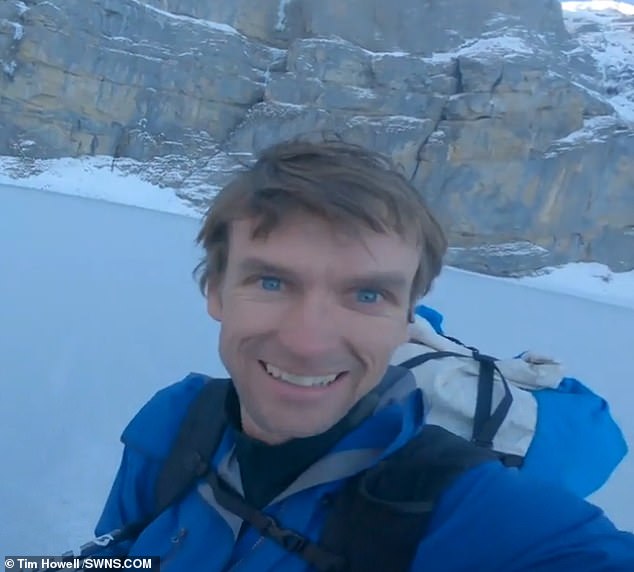 Mr Howell, who is known for performing a range of daring stunts in the air,  later described how landing on the frozen lake was ‘a really odd experience’

‘But our first BASE jump of the year worked out beautifully. Such good team! Huge thanks to: Maria for the best company. AdrenalinBase and the new ALL-T canopy.’

After sharing his video online, social media users rushed to share their thoughts on the the extreme sports enthusiast’s daring stunt.

One user wrote: ‘Super scenic. Much more impressive than another 1m above the trees wingsuit flight.’ 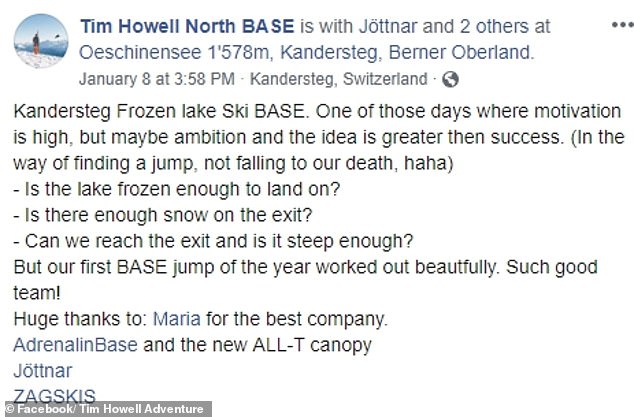 Social media users shared their praise of the daring stunt, with one person describing it as ‘epic’

While another commented: ‘Such an incredible location man! Awesome jump.’

This is not the first time the Mr Howell has performed a terrifying base jump in freezing temperatures.

In 2018, the ex Royal Marine captured the moment he climbed to the summit of Mont Blanc in the Alps, which is 4,810m above sea level, before throwing himself off its edge for a death-defying basejump. 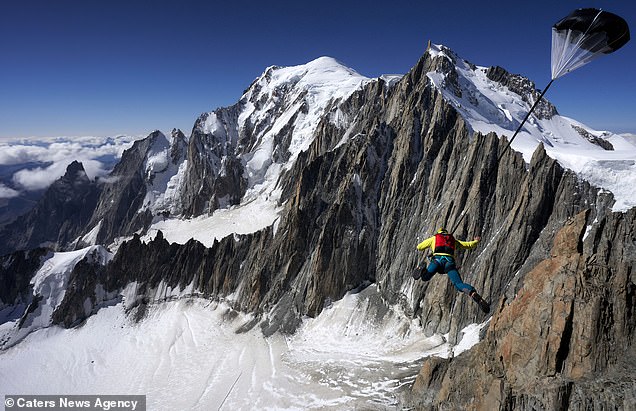 In 2018, Mr Howell climbed to the summit of Mont Blanc in the Alps before throwing himself off its edge