‘Delta usurped the one decision Australia thought we could control’

The Delta variant has forced Australia to live with COVID-19, a leading epidemiologist said, stressing that the public should no longer expect to hear about every case as the pandemic approaches the end of its second year.

In a paper published by the Sax Institute on Wednesday, Deakin University epidemiologist Catherine Bennett argued that the advent of the Delta variant has forced Australia to abandon its hope of stage-managing a perfect reopening to the world. 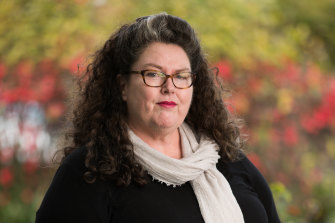 Professor Catherine Bennett believes the Delta variant has shown Australia it cannot stage a perfect reopening, and instead must focus on vaccination.Credit:Jason South

“Delta has usurped one important decision we thought was in our control – when we would let the virus in,” Professor Bennett wrote in the paper.

She said this drastic shift in the number of cases in the community, coinciding with the planned push for vaccination rates, had greatly bolstered the latter, although it was not surprising that the former was weighing on the mind of both some members of the public and some state governments.

“Our confidence in the path out of our current situation, in which more than half of the Australian population is affected by lockdowns, is not helped by the realisation that we are shifting into our transition from a very un-COVID-zero position,” she added.

Professor Bennett said NSW Health was “paving the way” for other states by shifting the focus of daily press conferences and alerts from case numbers and exposure sites to vaccination figures and availability.

“We do not know yet what the test, trace and isolate model in the transition plan looks like, but it will have a different emphasis from the 360-degree approach employed to date that includes searching for transmission chains downstream for those exposed and also upstream for a possible source,” she wrote.

“We no longer need to find every case if we are in suppression mode and NSW Health may be paving the way ahead for all states as they shift emphasis under the sheer burden of case numbers.”

Speaking to The Sydney Morning Herald and The Age, Professor Bennett said there was still merit in reporting daily case numbers as NSW approaches higher levels of vaccination coverage.

“Right now they are a predictor of what’s happening in hospitals and everyone still wants to know. I think if they did suddenly disappear, people would feel more anxious,” she said.

However, she said this should end once vaccination rates were sufficient and cases were not peaking.

“What you are managing then, at a state-level, is the disease, you are not managing every single infection,” she said.

“That becomes the domain of public health teams. And it could be a case of, if you catch it and you have been vaccinated, you won’t need to quarantine and that will be it.”

She flagged that Australia would be unlikely to experience a UK-style Freedom Day. Instead, it was likely that Australia would live with certain restrictions, such as masks, as well as social distancing habits. Professor Bennett expected some parts of the country to watch on for the effects of reopening in the two most populous states.

“We are testing our seaworthiness as we go,” she said.

Professor Emeritus Stephen Leeder, a University of Sydney public health researcher and director of the Research and Education Network at Western Sydney Local Health District, said he did not know if Australia “ever really thought COVID was in their control”, noting the international experience, as well as the potential for new variants, were well understood by government and health authorities.

“If we are to say the strategy of having zero cases is no longer an option: did we ever really think it was?”

Professor Leeder agreed that vaccination rates had been accelerated by the introduction of Delta into the community, but said he believed an elimination strategy was never viable, or seriously on the table, despite the rhetoric of some state premiers, such as Western Australia’s Mark McGowan.

“If that was a strategy, it would need to be inclusive of the whole of the world, like we have done with smallpox. But we are nowhere near that; there is COVID everywhere around the world,” he added.

Stay across the most crucial developments related to the pandemic with the Coronavirus Update. Sign up to receive the weekly newsletter.