London: Testing and tracing teams are being deployed to doorsteps across Britain to try and squash community transmission of nearly a dozen cases of coronavirus of the South African variant.

Health Secretary Matt Hancock said they had discovered 11 cases of the South African variant of COVID-19 that could not be linked to travel in five different locations across England, including in the East, West Midland, South East and North West as well as in London. More than 150 cases have been identified to date. 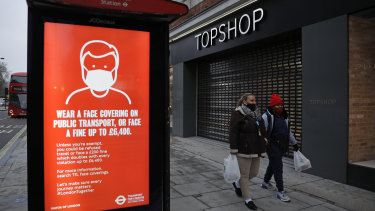 People walk past a closed brach of Topshop next to a bus stop coronavirus information sign on Oxford Street in London.Credit:AP

Britain remains in the grip of lockdown as it battles to curb the spread of a variant first discovered on its own shores, as well as trying to keep out other more transmissible variants that have emerged in countries with major outbreaks, including Brazil and South Africa.

Mobile surge testing units are being sent to the areas to carry out door-to-door testing and everyone living in the areas were urged to get tested regardless of whether or not they had symptoms. Every positive case will also be genomically sequenced.

“There’s currently no evidence to suggest that this variant is any more severe but we need to come down on it hard and we will,” Hancock told a news conference at Downing Street.

“Working with the local authorities we’re going door-to-door to test people in the local area…we’ve got to bring this virus to heel,” he said. 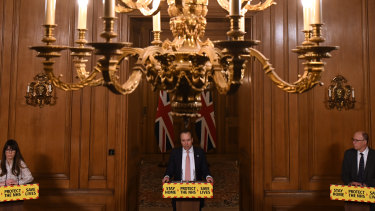 “Three of the vaccines that have been used to date in the trials have shown that they’ve been effective against [the] South African variant at a level greater than was set as the minimum standard by the World Health Organisation and the US Food and Drug Administration,” she said.

“We expect all other vaccines to have a similar level of effectiveness, particularly in reducing hospitalisation and death,” she said.

But key data continued to show improvements in Britain’s position with the number of vaccinations soaring to nearly 9.3 million in less than the two months since the first jab was administered – equivalent to 17.6 per cent of the British population.

Nearly one million were conducted on the weekend and almost nine in ten over eighties have had their first dose as well as more than half of those aged over seventy. Vaccinations have been offered to every elderly resident and staff member of care homes.

The number of new infections across Britain continued their steep fall to 18,607 – the lowest daily level detected since December 7 and before the country was placed back into lockdown, with the seven-day average down 29 per cent.

The number of patients being admitted to hospitals continued to decline with the seven-day average down by one-fifth. The death toll – Europe’s highest – stands at 106,564 – with a seven per cent dip in the daily death rate over the last seven days.

Britain’s restrictions are not expected to begin being eased until early March.