Driver fatigued from drug bender when he hit cyclist and fled, court told

Deborah Locco was doing everything she could to keep herself safe as she rode her bike on Beach Road. She wore a white jacket and reflective gear and her lights were flashing in the bike lane as dusk approached.

But nothing could protect Ms Locco from Christopher Hyslop. He had barely any sleep during his latest drug bender, was driving erratically and speeding as he rushed to pick up one of his daughters from his ex-wife. Despite those risks, he told his passengers he was fine to drive. 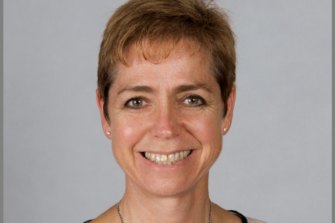 Dashcam footage showed Hyslop veered his Holden Commodore into the oncoming lane 14 times in 11 minutes on May 24 last year, forcing one driver to take evasive action.

But at 5.17pm that Sunday, Ms Locco wasn’t so lucky. When Hyslop veered into the bike lane as he headed south in Beaumaris, the Commodore hit the mother of three and grandmother and knocked her from her bike. The 60-year-old educator suffered critical injuries and died at the scene.

Hyslop had ice, amphetamines and cannabis in his system, and prosecutor Kristie Churchill said his driving was impaired by fatigue after days of drug use and little rest. A sleep expert estimated Hyslop’s impairment as the equivalent of a driver with a 0.2 blood-alcohol reading, Ms Churchill told the County Court on Monday.

Hyslop’s lawyer, Tim Marsh, said the 37-year-old had no memory of the crash as it was likely he was asleep when he veered into the bike lane. 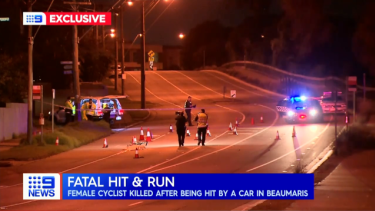 The scene on Beach Road, Beaumaris after the crash.Credit:Nine News

Hyslop got the sleep he needed later that day, but by that stage he was a passenger in a ride-share vehicle he ordered to drive him home to Armstrong Creek, near Geelong, after he abandoned his car and passengers following the crash.

Ms Churchill said Hyslop failed to stop after hitting Ms Locco and repeatedly said: “I hit him, I hit him. We gotta get out of here.”

He pulled into a nearby street, told his passengers – two women, one with a baby – to stay with the car and walked away.

The women were hysterical, the prosecutor said, and called for help for Ms Locco. Police arrested Hyslop at his home late that night.

On Monday, after the father of three pleaded guilty to culpable driving causing death, failing to stop after an accident and driving while disqualified, the court heard of the trauma Ms Locco’s death caused.

Her son, David, said he shared a passion for cycling with his mother but no longer did that, or used the walking routes they used to take, as both caused him to become overwhelmed and anxious.

“The night of the crime I had to drive along Beach Road looking for someone who never returned home. [That] is something nobody should ever have to endure,” Mr Locco said.

“I have to avoid the road, so I do not have to be reminded of the memory from the road that day, as it was quite traumatic and depressing.“

Two drivers who witnessed the crash told the court they no longer felt safe on the road and feared something similar would happen to their family members, as they had lost trust in other motorists.

Hyslop’s life derailed in 2017 when his wife walked out and left him a sole parent, Mr Marsh said, and he became increasingly dependent on drugs. He “was on a fairly significant drug bender” in the days before the crash.

He was now drug free, but that was also the case after a 2019 jail term for unrelated offending. He also has past convictions for driving offences.

Mr Marsh conceded Hyslop faced a substantial jail term for his serious offending, but described the failure to stop afterwards as towards the lower end for that offence. While his conduct added “a veneer of callousness” and reflected badly on him, Mr Marsh said Hyslop fled out of panic.

Ms Churchill said the failure to stop showed a “high degree of callousness” and that since Hyslop’s arrest he had shown little empathy for his victim and more concern for his plight.

Judge Elizabeth Brimer will sentence on a date to be set.