Driver leaves car straddling the rails after smashing through fence

It’s getting harder and harder to find a parking space at the station! Driver leaves their car straddling the rails after smashing through fence

Trains were today diverted at Stirling railway station after a car smashed through a fence and landed on the tracks.

Two women were taken to hospital after the Renault Clio crashed onto the tracks at around 12.20pm – but police confirmed the pair did not suffer serious injuries.

Photographs show the vehicle, which is believed to have crashed through a fence from the station’s car park, stopped across two tracks.

It is unclear how the vehicle ended up on the railway but ScotRail say they are working to clear it from the tracks.

Remarkably, another car was also reported to be on the line at Fort William today. 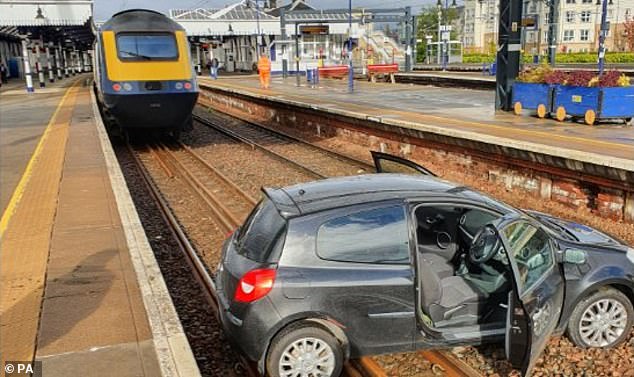 The trapped car in Stirling caused a series of platform diversions at the station, with ScotRail advising travellers to avoid platforms two and three.

It said: ‘A car has encroached on to the railway at Stirling. We’re working closely with the emergency services.

‘We’re able to divert trains around this obstruction by using Platforms six and nine at the station.

‘Use P6 if you’re heading for Perth/Aberdeen and P9 for Glasgow/Edinburgh.’

ScotRail added a Network Rail team was on the way to remove the car, inspect the track and ‘hopefully get Platforms 2 & 3 open again as quickly as they can’.

Do YOU know the driver?

In a separate incident, the rail firm tweeted: ‘We have had reports of a car on the line at Fort William, services will be delayed until we can remove the car.

‘Please keep an eye here and our app for live updates.’

British Transport Police told MailOnline it was unclear exactly how the car ended up on the tracks.

In a statement, they said: ‘Officers were called to Stirling railway station at 12.17pm today following reports of a car on the tracks.

‘The car is believed to have accidentally ended up on the tracks from the station’s car park.

‘Officers are still determining how the car ended up on the tracks.

‘Thankfully, those in the car have not been seriously injured.’