Driver slams the brakes and spins before speeding off in REVERSE

At least they didn’t hit anyone! Crazy driver slams on the brakes and spins 180 degrees before speeding off in REVERSE

A driver shocked other motorists last week when they lost control of their car and spun 180 degrees before reversing along a busy road.

The silver car careered along the road when its driver realised it was heading along a slip road they didn’t want to be on in Durham, North Carolina, last week.

Dash cam footage from another car captured the moment the car’s tyres screeched along the road when the driver hit the brakes. 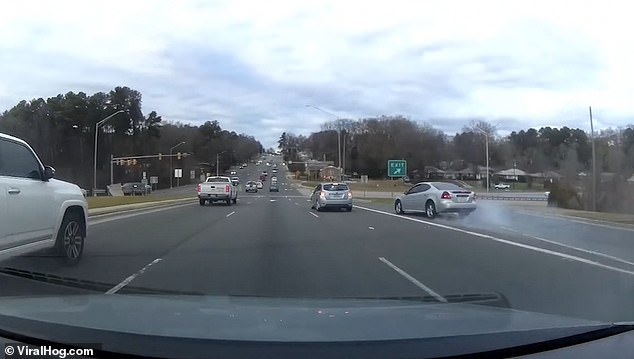 The silver car careered along the road when its driver realised it was heading along a slip road they didn’t want to be on in Durham, North Carolina, last week

The car spun out of control, luckily avoiding other vehicles at a junction of Duke Street on December 17.

Rather than stopping to assess any damage the driver decided to reverse at speed along the busy road until it came to another slip road they could use to turn.

Another driver in a blue car could easily have rammed into the car as it performed the dangerous 180 degree manoeuvre, but managed to stop in time.

Shocked viewers commented ‘Bond, James Bond,’ ‘don’t eat laxatives and drive’ and ‘is that not how you’re supposed to do it?’