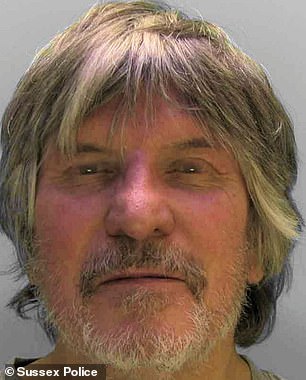 Keith Vernon, 76, from West Chiltington, Sussex, pictured, was jailed for two-and-a-half years after he admitted knocking down the young boy while drunk and driving more than a quarter of a mile his bicycle wedged under his car

A drunk driver who ran over a 10-year-old cyclist before reversing over him and crushing his helmet and then continued home with the bicycle stuck under the car has been jailed.

Keith Vernon, 76, from West Chiltington, Sussex, struck the young boy who was riding with his father an another adult, knocking him over the handlebars onto the road.

Vernon, who was more than twice the drink drive limit, continued to drive over the boy and the bicycle in his black Renault Twingo.

The boy’s father and other eyewitnesses tried to warn Vernon, who ignored the pleas and reversed over the boy, crushing his helmet and causing him serious injuries.

Vernon drove away with the boy’s bicycle wedged underneath his car and continued towards his home a quarter of a mile away.

The incident happened at 10.20pm on October 6 in West Chiltington, Sussex.

Emergency services raced to the scene and rushed the young boy to hospital.

He suffered extensive injuries, including a broken collar bone, a fractured verebrae, a fractured pelvis, dislocated him and a burn covering the left side of his face.

He is continuing to recover from his injuries some seven months after the incident.

Sussex police launched an immediate investigation and discovered Vernon’s car a short distance away parked with the bicycle wedged underneath.

Officers breathalysed Vernon who had 77mg of alcohol per 100ml of breath compared with the legal limit of 35. 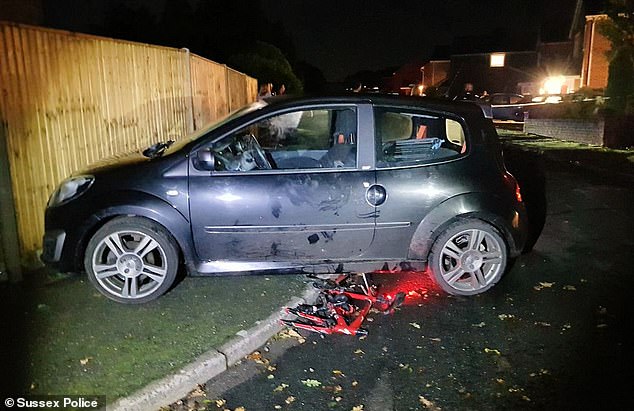 Keith Vernon, 76, from West Chiltington, Sussex, knocked down the 10-year-old boy and drove for a quarter of a mile with the youngster’s bicycle wedged underneath, pictured

He pleaded guilty to causing serious injury by dangerous driving, drink-driving and failing to stop at the scene of a road traffic collision at Worthing Magistrates’ Court.

Her Honour Judge Barnes said Vernon decided to drive while drunk and she did not accept that he had not seen the cyclists or believe that he did not know he had run over the child. 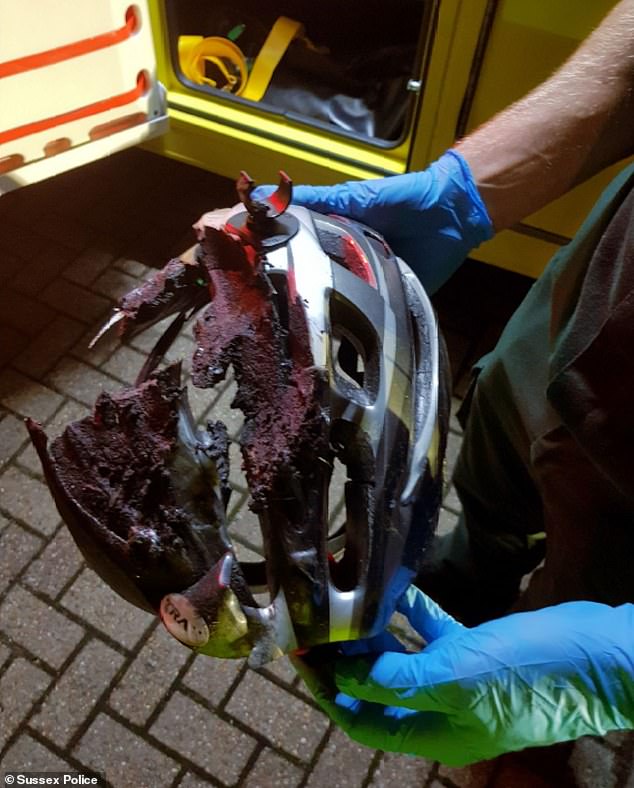 The young boy’s helmet, pictured, suffered serious damage after Vernon reversed back over the youngster who required major surgery

She condemned Vernon for driving away from the scene and for failing to call 999.

She said there was no blame attached to the cyclists.

Sergeant Richard Hornsey, who led the investigation for the Serious Collision Investigation Unit said: ‘Vernon was driving home after drinking in a local pub and was over the drink-drive limit when he collided with the cyclist. This was clearly a traumatic incident for those directly involved, but it has also affected the wider community.

‘Vernon ignored the pleas of the bystanders, which included the child’s father, and they described the wheels of the car spinning as Vernon tried to drive away while the child and the bicycle were trapped underneath.

‘The child was wearing a cycle helmet which received significant damage but protected him from a more serious head injury.

‘Vernon drove for over a quarter of a mile through the village with the bicycle trapped under his car, but at no point did he stop to check if the cyclist was still underneath, which shows a complete disregard for the safety of other road users.’