A Porsche driver accused of filming a dying police officer after a fatal crash on Melbourne's Eastern Freeway has been taken to hospital after a disturbance at his home in which police had to negotiate with him to get off the roof.

Richard Pusey has been committed to stand trial on driving charges and one count of outraging public decency over allegations he used his mobile phone to film the aftermath of a crash on the Eastern Freeway in Kew on April 22. Four police officers were killed in the crash. 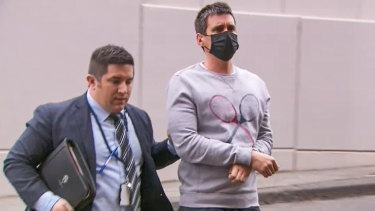 Police attended the 42-year-old's warehouse home in St David Street, Fitzroy after reports of a disturbance around 11.30pm on Sunday night.

Responding officers held concerns for the welfare of those involved as "people could be heard yelling and windows were being smashed", according to a Victoria Police spokeswoman.

The resident of the home was contacted by police but did not provide access to the property.

"Due to concerns for the welfare of the occupants Critical Incident Response Team police forced entry to the warehouse-style residence before finding the male on the roof," the police spokeswoman said.

The area around the St David Street residence was cordoned off while critical incident officers negotiated with Mr Pusey.

The 42-year-old surrendered to police "without incident" and was taken to hospital for assessment.

A woman who was in the property at the time of the disturbance wasn't injured. She was assisting police with their inquiries on Monday morning.

Police said the investigation into the incident was continuing.

Mr Pusey had been pulled over for allegedly speeding when a truck veered into the emergency lane, killing Leading Senior Constable Taylor, Senior Constable Kevin King and constables Glen Humphris and Josh Prestney.

Mr Pusey's bail was extended on December 15 and a half-day case conference will take place next year on February 3.

Mohinder Singh, who was driving the truck which hit the officers, pleaded guilty earlier this month to four counts of culpable driving causing death, possessing a drug of dependence and drug trafficking.

Trucking company manager Simiona Tuteru, 49, is set to fight charges of manslaughter relating to the deaths of four police officers.