A HUGE blaze has broken out in South London – after a massive explosion under Elephant and Castle train station.

Black smoke can be seen billowing above the capital for miles after a large fireball erupted under the major transport hub. 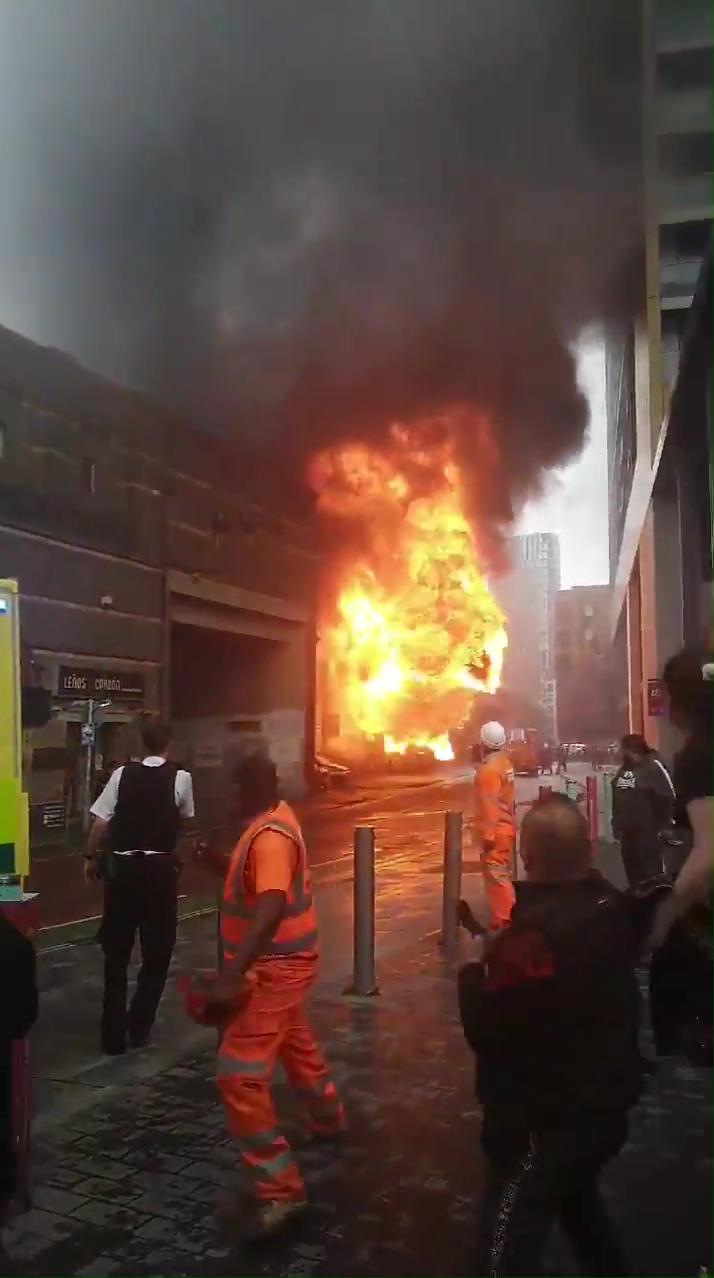 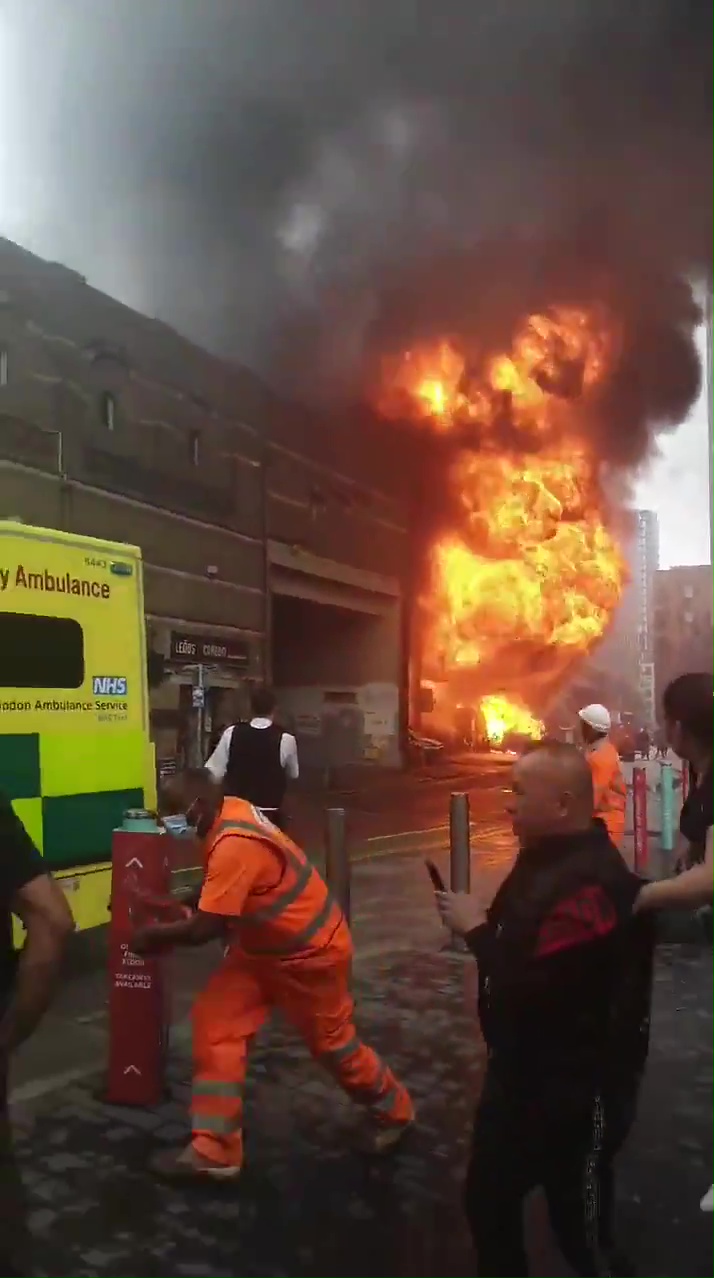 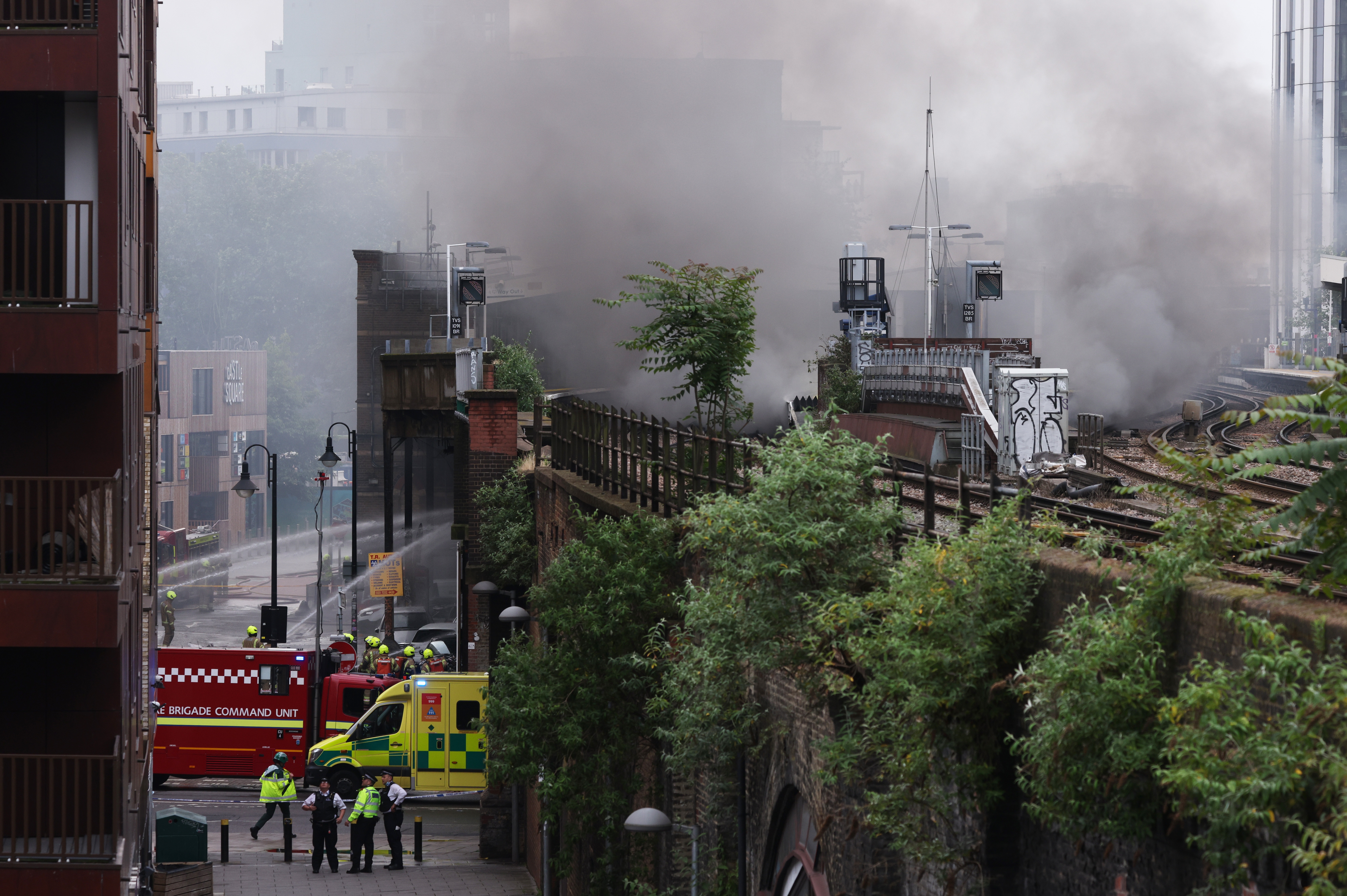 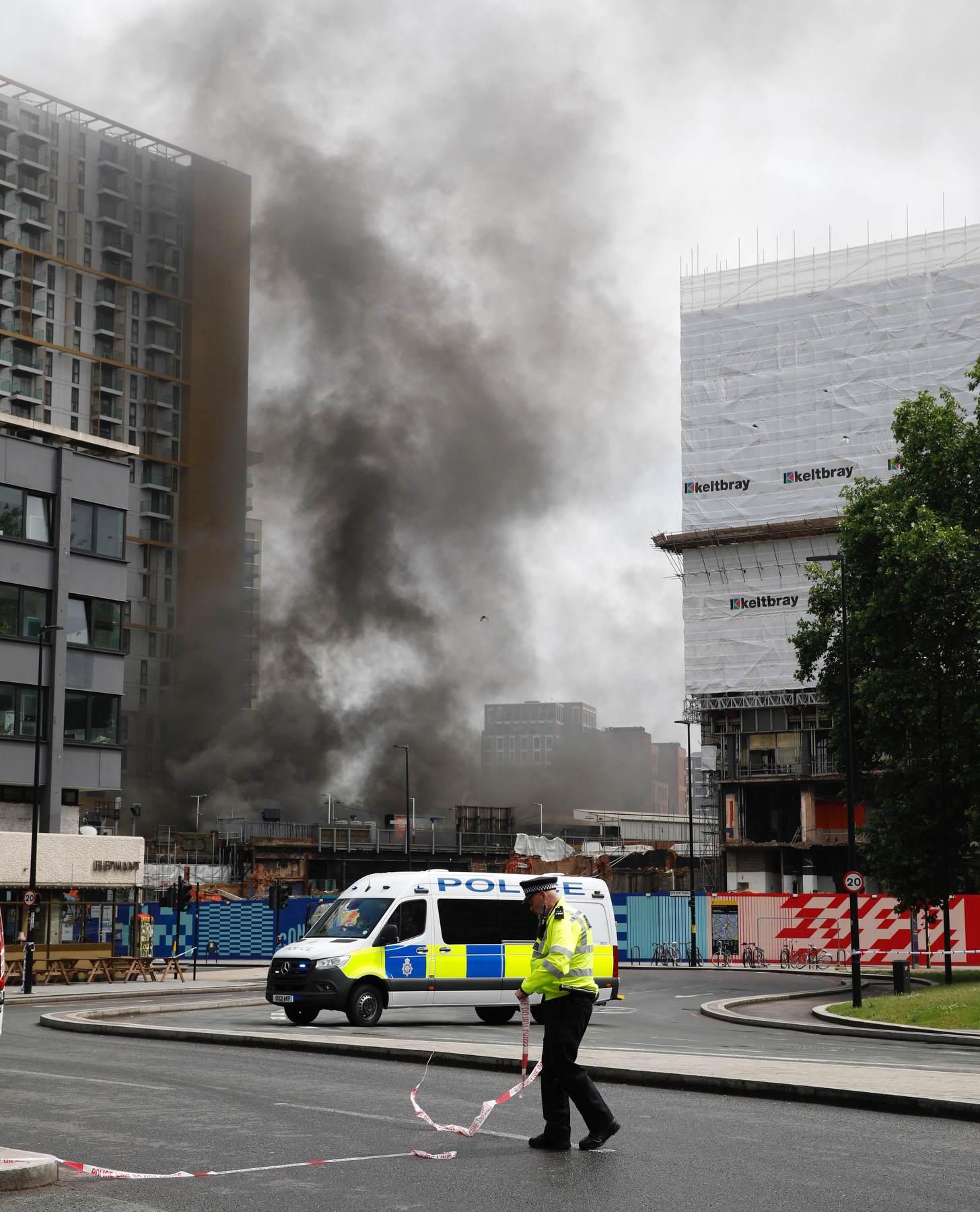 A police officer and a member of the public at being treated for smoke inhalation after a blaze broke.

Terrified witnesses posted the shocking images on social media, explaining that they had been “engulfed” in black smoke.

Police are currently urgently evacuating residents and businesses in the area.

Officers have reportedly confirmed that "dangerous chemicals" have been involved in the blaze.

Thick plumes of black smoke could be seen filling the air above central London at around 1.45pm this afternoon.

Travellers were urgently evacuated from the station after the blaze broke out.

There are unconfirmed reports the fire broke out at an auto repair shop in one of the arches under the station.

A mechanic who works in the garage said: “We all had to run out of the shop. I didn’t see how it started.

“There were six of us in the shop at the time. We left all our things in there and had to run. I could see flames about seven metres high.

“My phone is still in there and all my things. There are three cars in there now and other things that can explode so I don’t think we will be allowed back.” 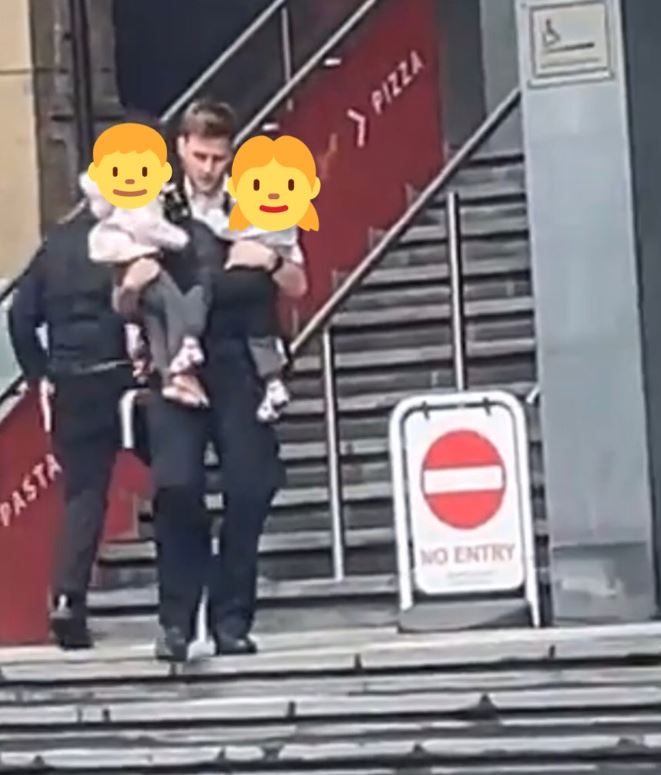 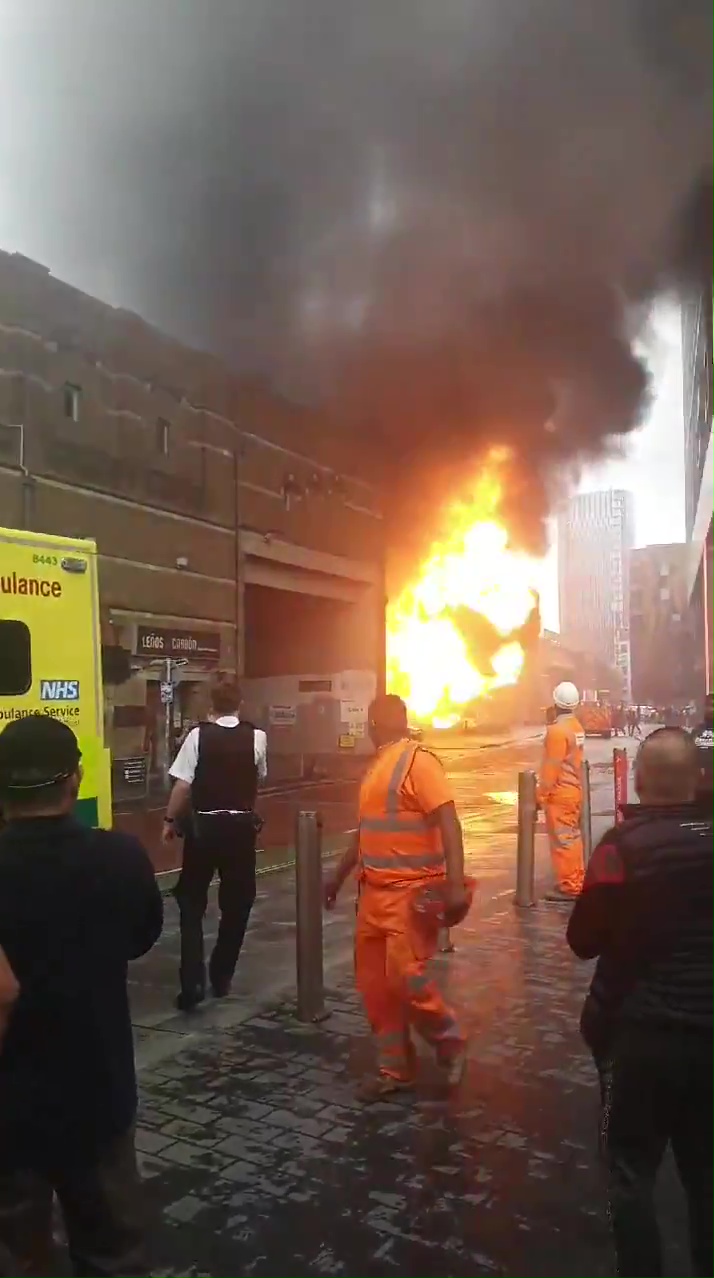 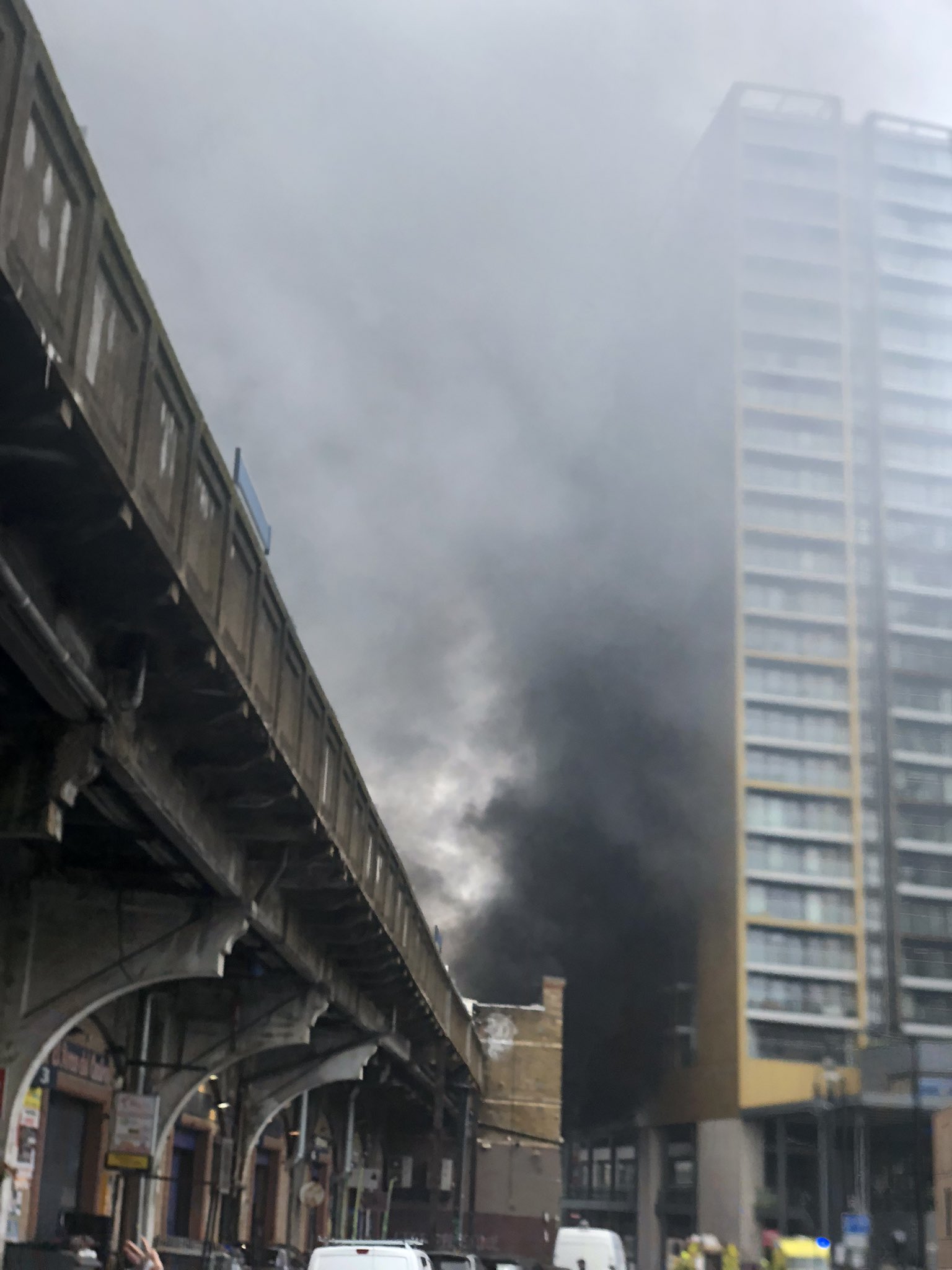 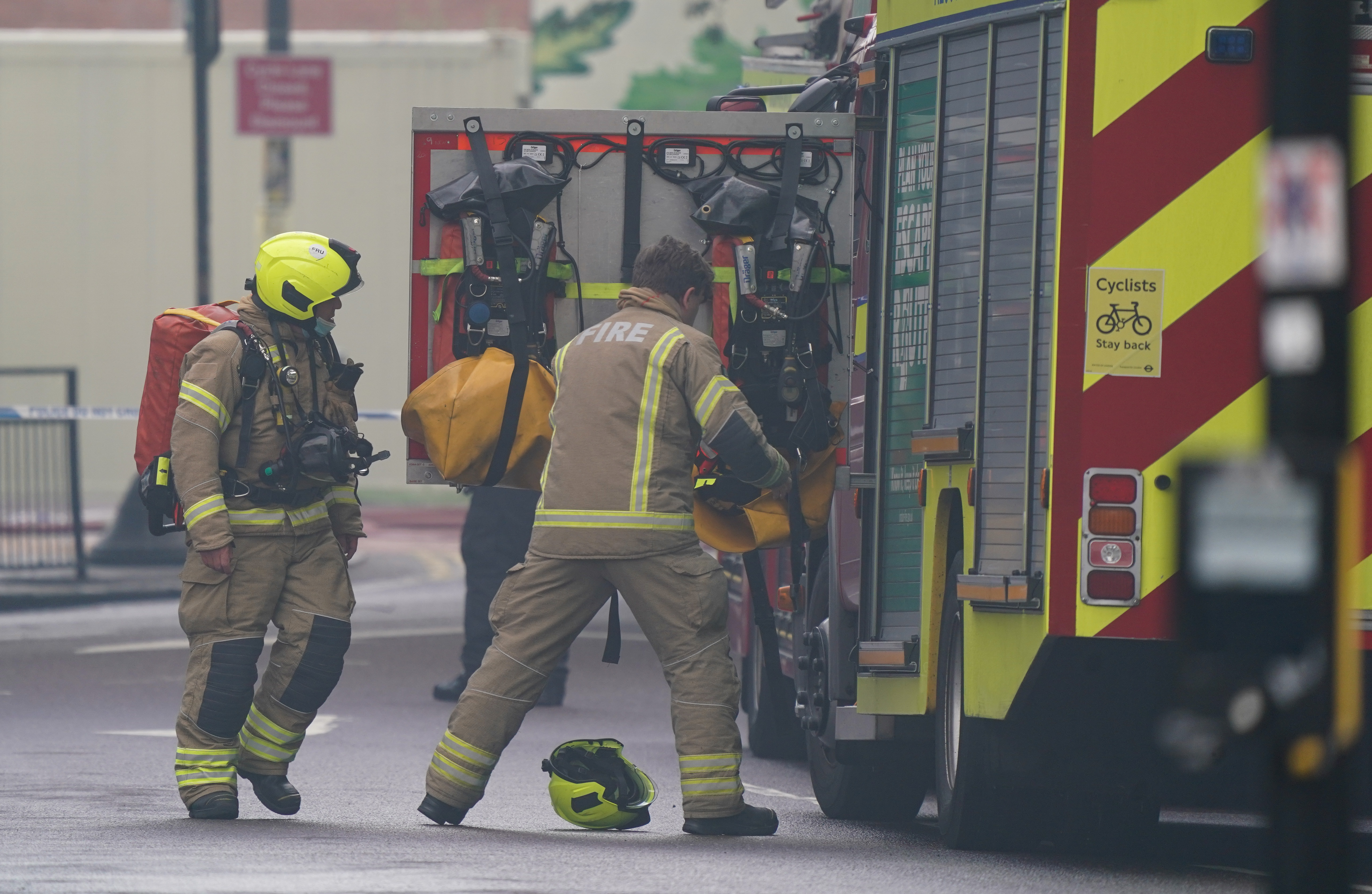 A passenger on the Tube travelling through Elephant and Castle station said the area was being "hurriedly closed", and that it was a petrol station that had caught fire.

Dramatic pictures showed a heroic police officer rescuing two children from the fire after it broke out at the station.

Services are set to be disrupted for an extended period of time, potentially causing chaos during the after work peak hour rush.

Thameslink said all lines through Elephant and Castle are currently blocked due to the fire.

Services between St Albans and Sutton and London Blackfriars and Sevenoaks are affected.

The Northern Line is not stopping at Elephant and Castle tube station as a result of the fire.

Officers have taped off Walworth Road, leading up to the station's entrance on Elephant Road, and closed the entrance to the Northern line.

One video shows the moment that a huge ball of fire exploded out of the side of the station. 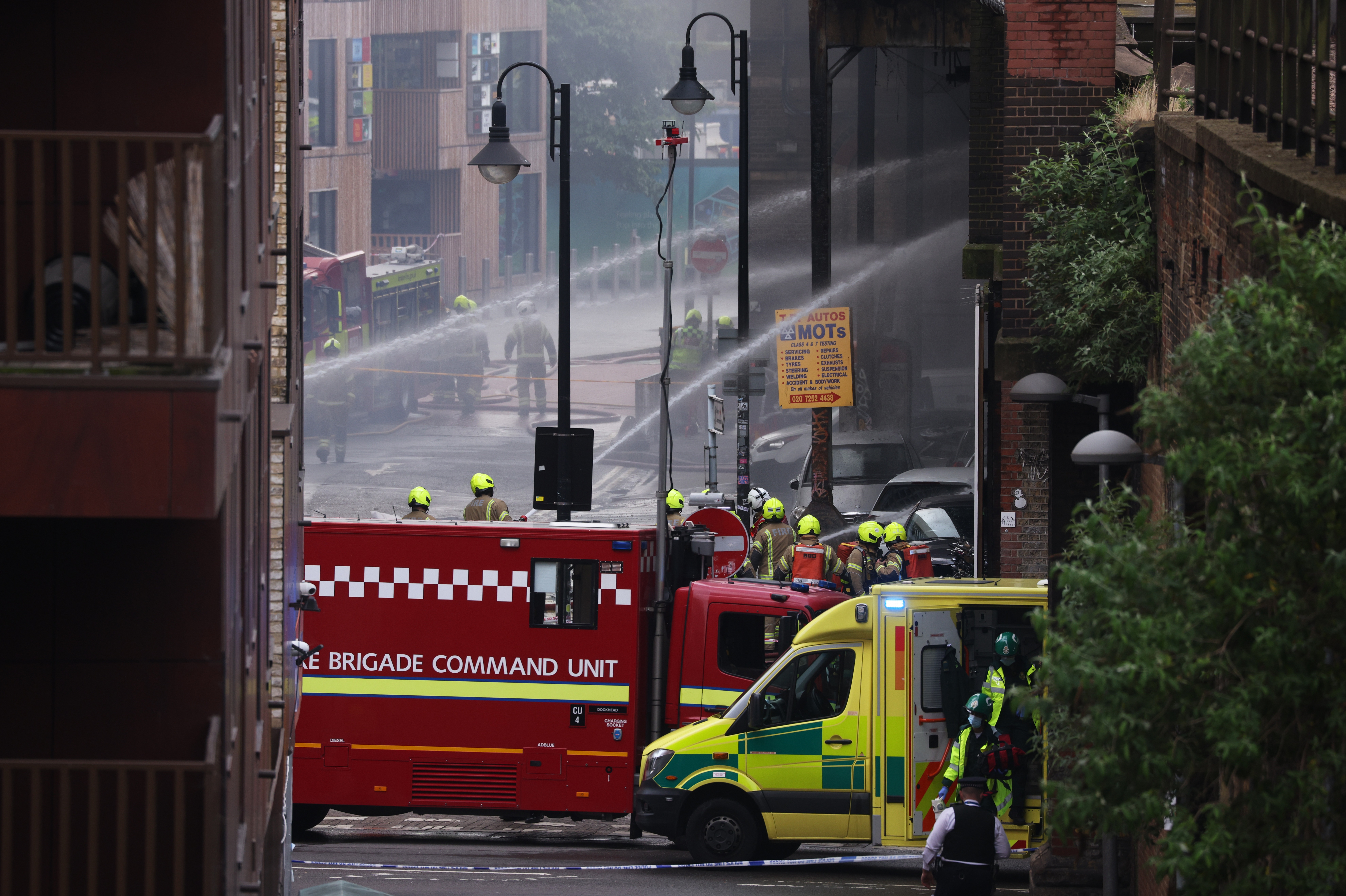 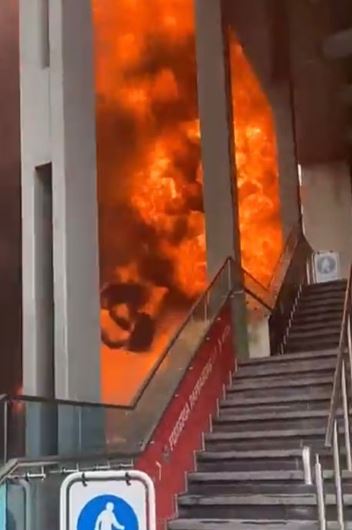 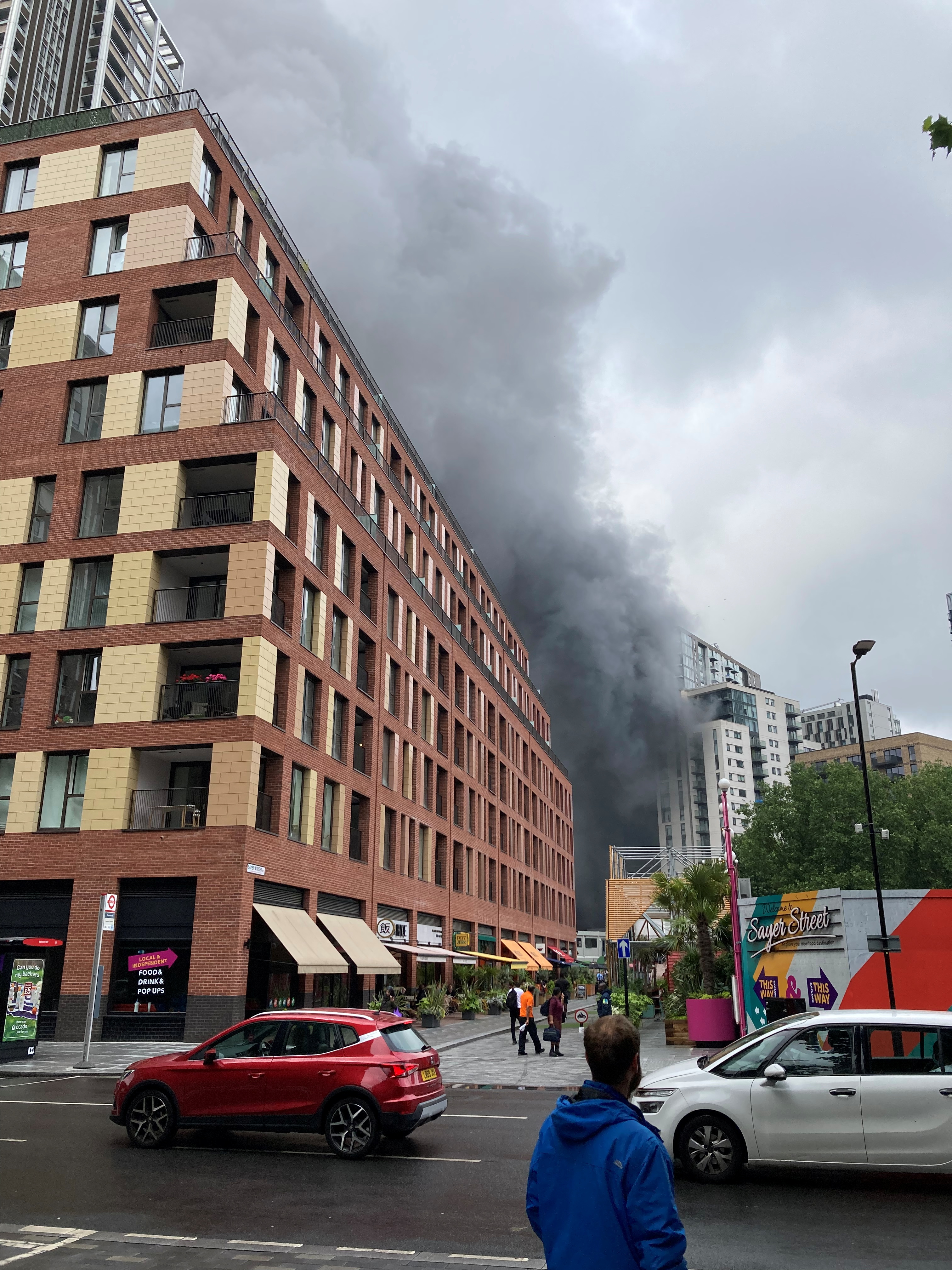 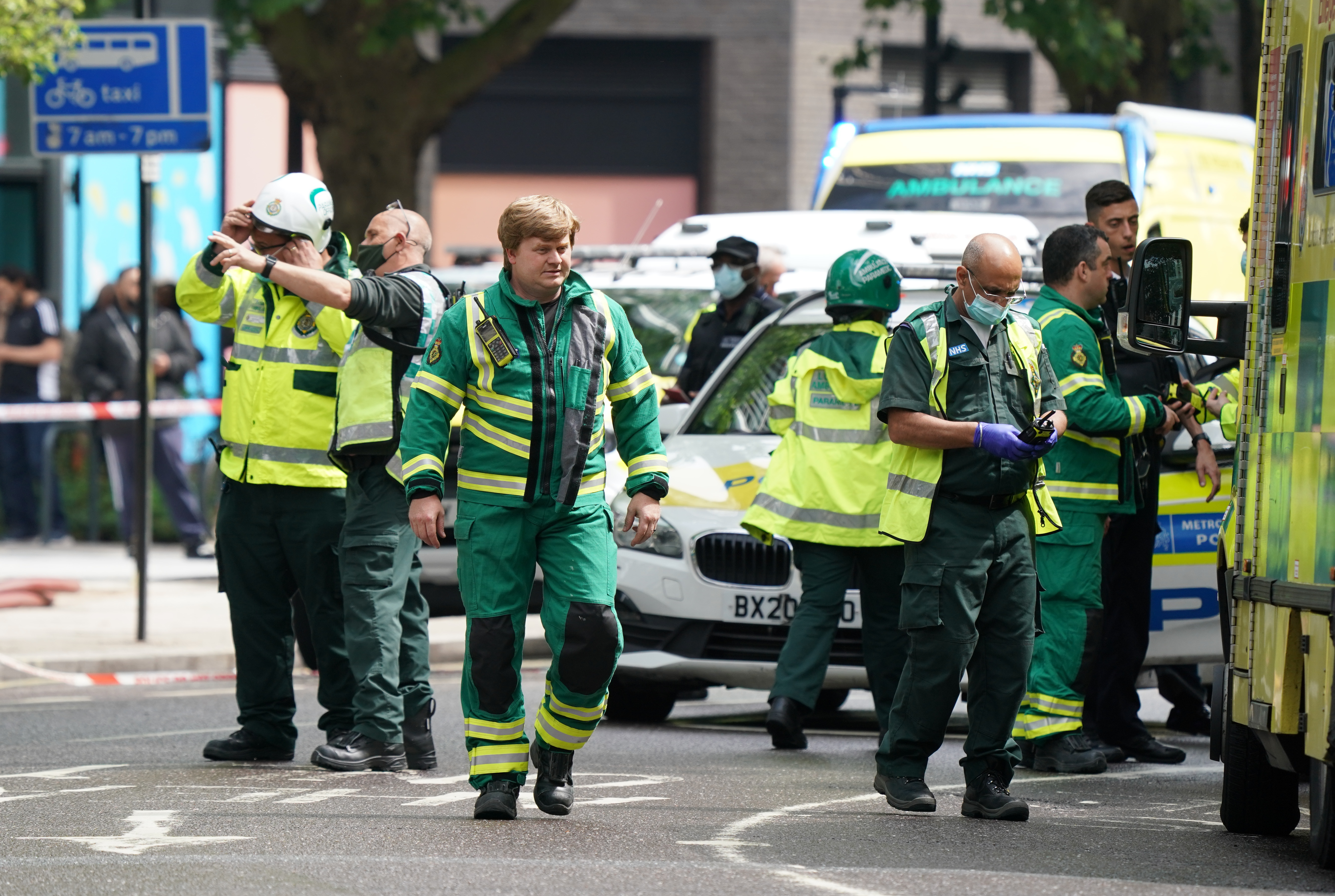 Sara Scarpa, 25, lives in nearby apartment building Hurlock Heights and said smoke and the noise of the explosion had reached her window.

"We opened the window for a sec as you could hear people shouting, and we smelt something very very strong," she said.

"The smoke (was) dying down a little… we heard an explosion and now it started again."

A three-year-old tabby cat called Cat is still believed to be stuck inside the area where the fire broke out.

The cat's owner Adam Watts said: "The firemen are aware that he is still in there and I am hoping and praying he comes back out alive. I will wait here until they save him."

Mayor of London Sadiq Khan said: "My thoughts are with all those affected by the very serious fire in Elephant and Castle, which is now under control.

"I am in close contact with the Fire Commissioner."

London Fire Brigade said around 100 firefighters were battling the blaze, and that three railway arch units, six cars and a telephone box were all on fire.

Station Commander James Ryan, who is at the scene, warned people to "avoid the area" and "keep windows and doors closed".

He said he was aware of the fire at the station and his team was working closely with Transport for London and Network Rail, and thanked the emergency services.

A London Ambulance Service spokesperson said:"We were called at 1.50pm todayto reports of a fire near Elephant and Castle station.

"We sent a number of ambulance crews, incident response officers and specialist response teams to the scene, including our hazardous area response team.

"They remain at the scene where they are working alongside other emergency services."

A Metropolitan Police spokesman added: "Police were called at approximately 13:47hrs in response to a fire on Elephant Road, SE17.

"Officers and the London Ambulance Service are supporting London Fire Brigade at the scene.

"There are significant road closures in place and the public are advised to avoid the area.

"The station has been evacuated and residential evacuations are taking now place.

"At this early stage, the incident is not believed to be terror related." 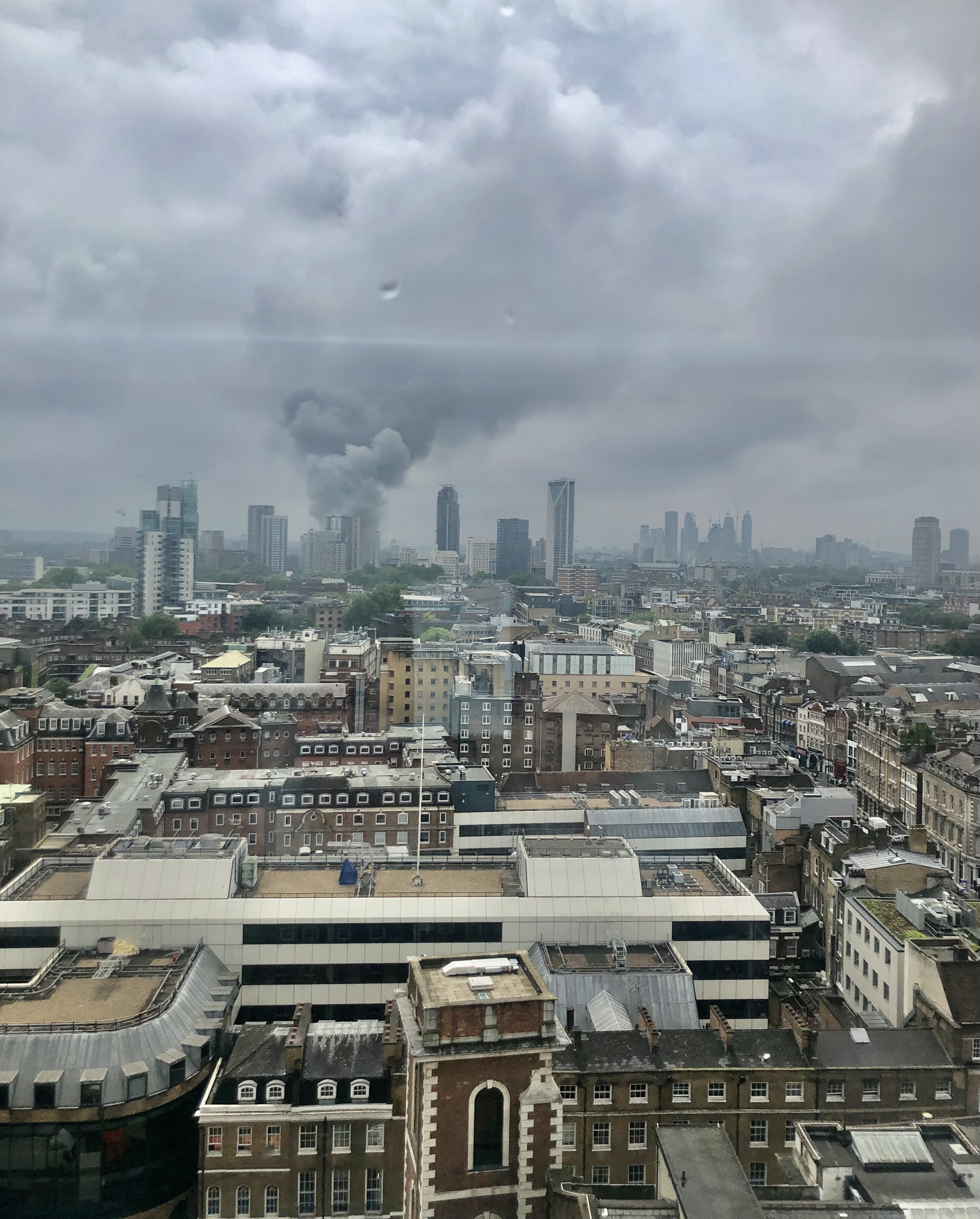 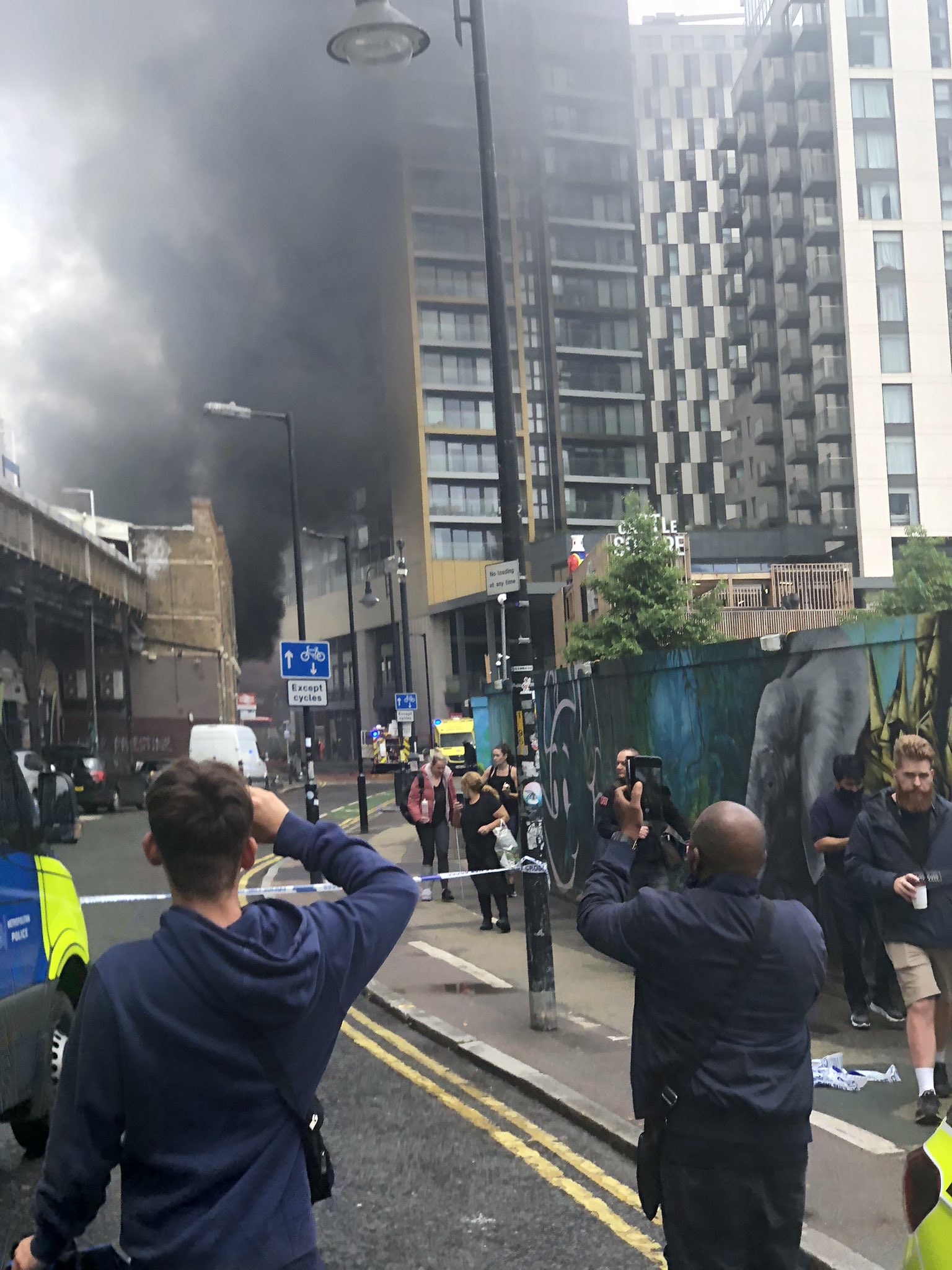