‘Everyone knew everyone’: TV drama proposes look back on Flinders Lane rag trade

A new period TV drama series set in the Flinders Lane rag trade district will explore not just fashion but its multicultural heart.

In the decades after World War II, people fleeing their homelands found a community and steady work among the designers, manufacturers and importers based in the four blocks east of Melbourne’s Elizabeth Street. 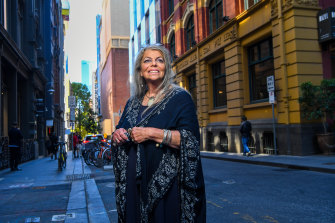 Author Lesley Sharon Rosenthal, whose book about the rag trade history of the lane, Schmattes, has been optioned to advise the series, which is now in development.

She said the area used to be bustling, with clothes being wheeled on trolleys, models rushing to appointments and deals being done in the street.

Ms Rosenthal said that in addition to frocks, “everything from school uniforms to zips, women’s underwear to ball gowns” were manufactured in the lane.

There are no shortage of true stories to inspire the series, proposed by producers Julie Eckersley (Glitch, The Family Law) and Bethany Jones (Molly, The Unknown Patient), which could be set in the late 1940s or early 1950s. 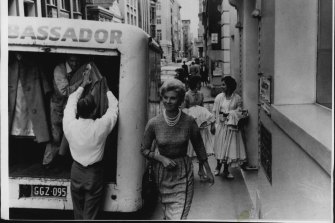 Ms Eckersley said the series was partly inspired by her Italian immigrant mother-in-law, Giovanna Boi, who felt at home working as a seamstress there in the 1950s, despite knowing little English.

Mr Rosenthal, who also made a documentary about the lane, remembers Italian immigrant Maria George’s warehouse and showroom, which was a magnet for seekers of sequins, beads and buttons.

The diminutive but larger than life Mrs George kept “jars and cabinets of beads, and it was like walking into a lolly shop,” Ms Rosenthal said. ”Sometimes you’d go in just to look at them all, and find inspiration.”

Mrs George’s friend Mary Farrugia said she had a “treasure room” accessible by favourite customers, with items such as vintage Swarovski crystals. 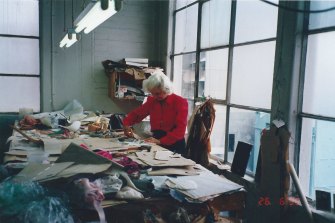 Fashion designer Elvie Hill in her Flinders Lane workroom in 1996.

To kick off the creative process for the TV series on March 14, the producers will host a free online panel discussion, featuring Ms Rosenthal, historian Tom McEvoy, and retired retailer Katherine Pakula.

Members of the public can ask questions and contribute memories.

The event, called Frocks, Fashion and Flinders Lane, will also include a fashion show with a live model of garments created in the iconic lane.

And on March 23, there will be free online Q&A session about developing the new television series. Both events are funded by a City of Melbourne grant.

Ms Eckersley said the series would celebrate multiculturalism and Flinders Lane’s influential role in the growth of the Australian fashion industry, but also show “the glamour and beauty” of the era.

Katherine Pakula, 73, would visit her dad, Czech Jewish immigrant Joe Erban, when he worked in the 1950s and 1960s, first for Ada of California swimwear factory in Flinders Street and later for Lux Lang and Co fabric importers in Flinders Lane.

Ms Pakula said “everyone knew everyone” and when she was a child, her father bought her clothes cheaply from lane wholesalers.

Deals would be done on the street as well as inside, and the lane would be packed with delivery trucks and vans, as racks of clothes were wheeled by.

In the 1980s and 1990s, Ms Pakula would order stock for her own fashion shops at the lane.

But parking restrictions made it impossible for her to do business there. Most companies either moved to the suburbs to expand or were wiped out by cheap imports.

Ms Pakula said a TV series would be a fun look back to a hopeful time.

“There was full employment, people could aspire to be anything they wanted to be. All you had to do was work, and you could get there,” she said.