‘Everything is uncertain’: Coronavirus rages in Argentina, cases top 700,000

Buenos Aires: Argentina's coronavirus infections has topped 700,000 with new daily infections and deaths among the top five globally, new data showed, despite seven months of quarantine that have ravaged the frail economy. 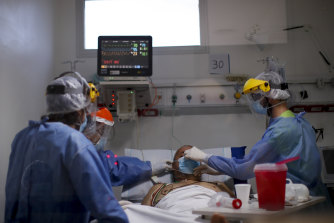 Doctors treat a COVID-19 patient inside an intensive care unit on the outskirts of Buenos Aires.Credit:AP

Health officials said that since March there had been 15,543 deaths. On Friday, the province of Buenos Aires announced it had underestimated the death toll from COVID-19 by 3523, outraging many Argentines already weary from months of lockdown that had failed to slam the breaks on the pandemic.

The additional deaths from Buenos Aires province were not incorporated in those figures, the health ministry said.

Argentina, which was already in the grips of a devastating economic crisis, was among the first countries in Latin America to implement a strict quarantine. But a gradual loosening over time and the spread of cases from the capital to the provinces have seen cases skyrocket.

Carlos Landa, a 45-year-old archaeologist from Buenos Aires who contracted coronavirus said he and his partner, who was also infected, had seen their lives turned upside down. Different healthcare coverage meant one was immediately tested, and the other was not.

The virus had exposed once again the perils of the ailing economy and healthcare systems, he said.

"Everything is uncertain," he said.