Paving the way for 2200 apartments to be built on the site of the Preston Market would pose an existential threat to stallholders, Darebin City Council officers have warned in a draft submission to the Victorian Planning Authority.

The authority released proposed rules for the 5.1-hectare site in May that would allow up to 20 storeys of apartments but ensure a fresh food market would remain regardless of any future development. 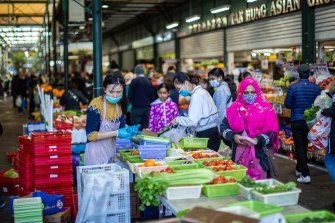 Analysis by Darebin Council has found the plans would make the site more dense than Fishermans Bend, Australia’s largest urban renewal precinct, which will have an average of 323 people per hectare once 80,000 people move into the district by 2050.

The planning authority’s suggested rules at the market would allow 423 homes per hectare, according to the council’s analysis.

In a draft submission, council officers warn that the proposal “fundamentally fails to protect the social, economic or cultural functions of the market and poses an existential threat to Preston Market”.

Councillors will vote on how to proceed on Monday, and could suggest reducing the maximum number of apartments to 1200, or 330 homes per hectare. 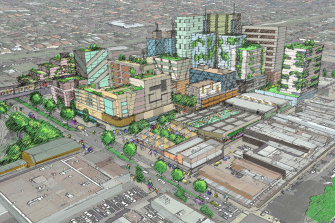 An artist’s impression of what could be allowed under the draft controls, viewed from the southeast with the market in the centre and apartment buildings in the background.Credit:VPA

If supported by councillors, Darebin would push for the maximum height of any development to be limited to 14 storeys rather than 20, claiming the municipality already has sufficient capacity to meet housing needs despite a growing population.

Councillors have previously voted to keep the height limit at 12 storeys.

The planning authority has been reviewing development rules for the precinct and fast-tracked the process after it was asked to identify projects that were close to shovel ready and had a high economic value to help boost the economy after COVID-19.

The authority wants to make better use of the private land and sprawling car park to provide jobs and housing, arguing that rare, well-connected land of that size was needed to tackle urban sprawl. 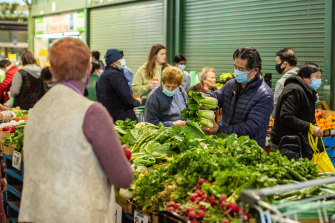 There is some agreement the market needs an upgrade.Credit:Scott McNaughton

The market would be repositioned to front Cramer Street, at the southern end of the site, retaining only the existing fruit and vegetable shed with new local heritage controls.

The floor space for traders would not be reduced, but most of the 120 stalls would be moved, which Darebin’s draft submission says would leave the market “irrevocably changed” and could lead to chain stores trampling its character.

Darebin mayor Lina Messina, whose first job in high school was at a fabric shop at the 50-year-old market, said the planning authority’s rules had got it wrong and did not meet the Preston community’s expectations for the precinct. But she agreed the market needed an upgrade and there was room for development.

Planning authority chief executive Stuart Moseley has stressed the draft rules would make sure that any development retained a fresh food market of about the same size.

Ten per cent of the apartments would need to be affordable housing, which Darebin officers want doubled to 20 per cent. The developer would have to donate 10 per cent of the land value to create open space, most probably opposite Preston City Oval.

The authority has said the proposed rules would guarantee the future of the market while improving its layout and providing for much-needed housing in a growth area.

Sam Tarascio, managing director of part-owner Salta Properties, has previously committed to the future of the market, noting there is demand for a more modern site.

Jim Katsaros, who has run Athina’s Deli at the market for 10 years, said he did not expect Monday’s “symbolic vote” by the council to make much difference.

He was not against development at the site but felt the proposed rules would allow for too many apartments.

“There’s a lot of concerns about what it means 20 years down the track.”

Submissions to the consultation process close on July 13.