Start buying your Christmas presents now! Retail leaders warn that toys and electrical goods could be in scarce supply this festive season as port logjams continue

Families have been warned to start shopping for Christmas now amid fears that supplies of toys, electrical goods and other products will be disrupted by logjams at UK ports.

Retail leaders say the shortage of HGV drivers to carry loads from docks around the coast is threatening festivities and the wider economy.

Shipping giant Maersk has diverted some supersize vessels away from Felixstowe – the country’s largest container port – to alternatives on the Continent such as Antwerp and Rotterdam. 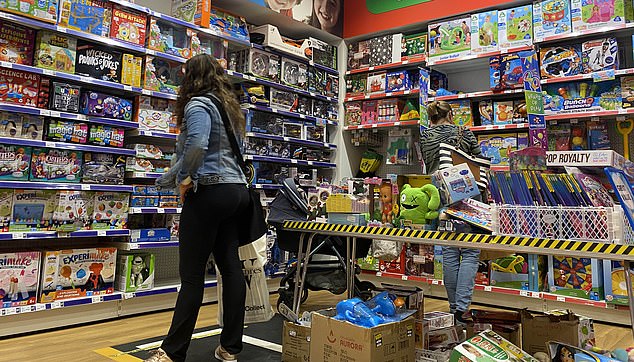 It is hoped containers will then be transferred to smaller ships that should find it easier to get a berth at smaller UK docks.

‘Britain’s Christmas is relying on a Dunkirk-style removal of goods from Europe on to smaller ships bound for ports across the UK,’ said David Jinks, of the parcel delivery firm ParcelHero.

‘That looks to be the only way to bring many Christmas gifts home.’

Peter Wilson, of the shipping agency Cory Brothers, said the UK has a ‘significant pinch point around HGV drivers and the demand on them to move goods from the ports’.

He insisted the supply chain will not fail but told BBC Radio 4’s Today programme consumers should ‘be sensible, think ahead, plan appropriately and order your Christmas goods and the items that you need in a timely fashion to ensure you have them’.

The British Retail Consortium’s Andrew Opie said: ‘Congestion at Felixstowe is yet another unwanted side-effect of the HGV driver shortage.

‘As cargo cannot be removed fast enough, there is a backlog of containers at the ports preventing new ships from docking and unloading.

‘Retailers are working with suppliers to mitigate issues, including finding alternative routes to bring goods into the country, but further disruption may be unavoidable.’

The British Toy and Hobby Association said: ‘We expect continued disruption to delivery schedules… over the coming months.

‘There are plenty of toys to choose from presently but, in common with other sectors’ advice, buying early – especially if buying for a Christmas or a birthday present – is prudent.’

Thousands of shipping containers at Felixstowe in Suffolk, as shipping giant Maersk is diverting vessels away to unload elsewhere in Europe

Gary Grant, of the toy giant The Entertainer, said yesterday Barbie dolls and Paw Patrol toys are ‘prime candidates for being short in the Christmas season’.

‘That is largely down to transportation and warehouse issues, rather than there being a shortage of toys.’

Alex Hersham, of the freight forwarding company Zencargo, used by brands including Vivienne Westwood, Swoon Furniture and Soho Home, said: ‘Some containers have been sitting at Felixstowe for double the usual length of time – between ten and 20 days – pushing the port towards capacity.

‘With Felixstowe handling almost 40 per cent of all the containers coming to and from the UK, this adds yet more imbalance to Britain’s supply chain.’

But Tim Morris, of the UK Major Ports Group, said: ‘There’s no need to panic. The global supply chains are very busy but they’re robust.

‘There’ll be some short-term fluctuations but retailers, their suppliers, all the logistics companies that work in between the manufacturing and the sales side will be working hard to keep supplies moving.’

Tory party co-chairman Oliver Dowden insisted the Government is ‘working through these challenges’, for example by boosting training places for HGV drivers.

Asked about Christmas, he said: ‘I’m confident people will be able to get their toys for Christmas. Some people buy very early for Christmas… others buy later. I would say just buy as you do normally.’

Desperate steel, chemicals and glass factories plead for tax breaks on soaring energy bills as Boris prepares to sign off hundreds of millions of pounds in LOANS

Desperate steel, chemicals and glass factories today pleaded for tax breaks to help them cope with soaring energy bills – as Boris Johnson prepares to sign off hundreds of millions of pounds in loans to keep them afloat.

Energy-intensive businesses insisted cutting taxes and levies was more important than a bailout, after an extraordinary bout of wrangling in Whitehall.

Mr Johnson appears to have sided with Business Secretary Kwasi Kwarteng following his spat with Chancellor Rishi Sunak over the need for government support.

A package is now due within days, but rather than handouts or a price cap on industrial energy costs, it is expected to come in the form of loans.

It is understood the support will also come with ‘strings attached’, ensuring companies cannot pay out big bonuses while they are benefiting.

The move could raise concerns that the government is merely kicking the can down the road, as firms will have to repay the costs later when energy prices have settled down.

The Treasury is said to have been alarmed at the prospect of doling out more cash, warning that ‘demands simply increase’ when sectors know the Chancellor is involved in the process.