Feeling parched! Festivalgoers soak up the heat in Reading and Leeds

Feeling parched! 165,000 youngsters soak up the 23C heat in sun-scorched festival-grounds of Reading and Leeds on the final day of twin music events

Festivalgoers at Reading and Leeds festival have been enjoying the dry weather as they party at the event’s final day — with no wellies or mud in sight.

Attendees could be seen relaxing on the parched ground, which has turned dusty as a result of the drought. The events welcomed 90,000 to the Reading site, and 75,000 to the Leeds site over the course of the weekend.

Meanwhile holidaymakers flocked to the UK’s beaches in the sun today, as the Bank Holiday continued to bring good weather before the return of schools at the start of September.

Temperatures remained in the low 20s today, with highs of 77F (25C) in parts of London and the west of the country, including Liverpool and Bristol.

And the warm temperatures will continue into the week, before slightly more unsettled weather arrives from the west next weekend.

Dry conditions today and tomorrow will be welcomed by the tens of thousands of festivalgoers and attendees expected at London’s Notting Hill Carnival on both days.

But for the ten regions in drought, weather will remain ‘very, very dry’, the Met Office forecasts. 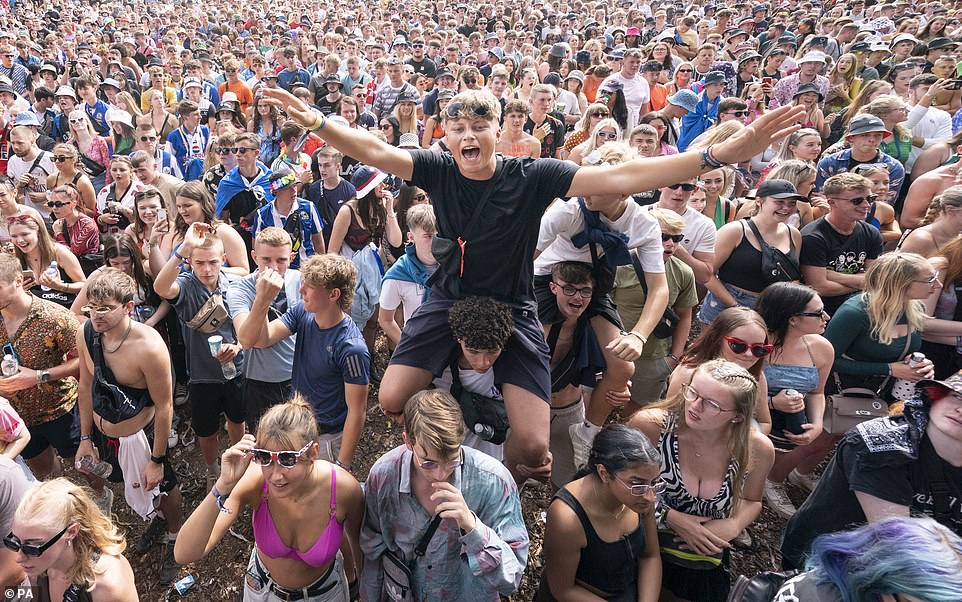 There were no wellies or mud in sight at Leeds Festival, where the weather has remained dry over the Bank Holiday weekend 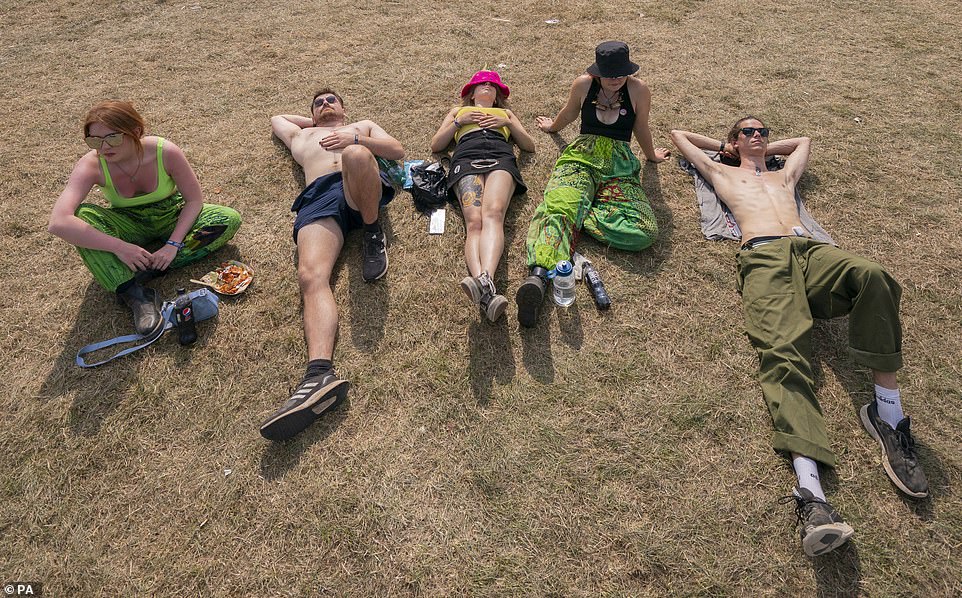 People relax in the sunshine at Leeds Festival, where conditions have stayed dry during the Bank Holiday weekend 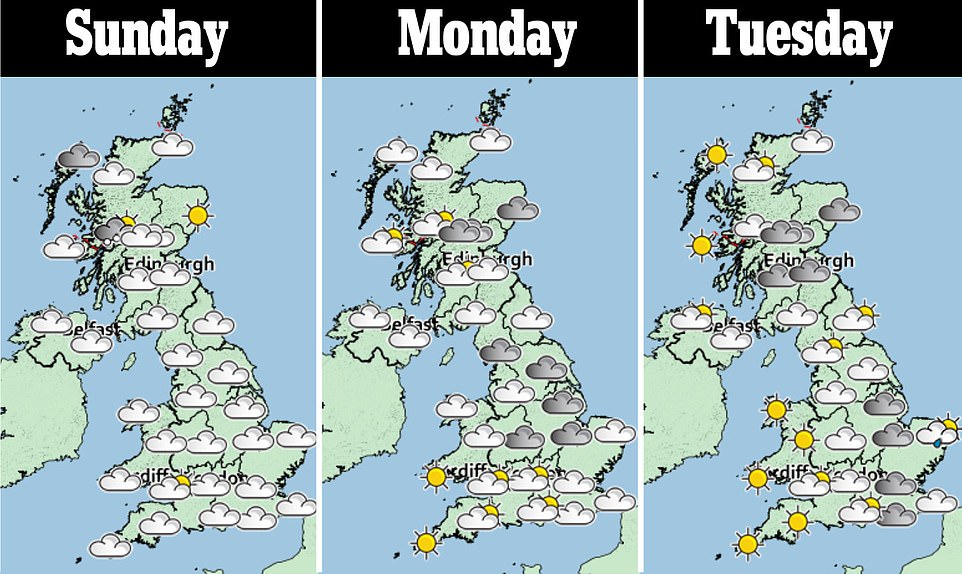 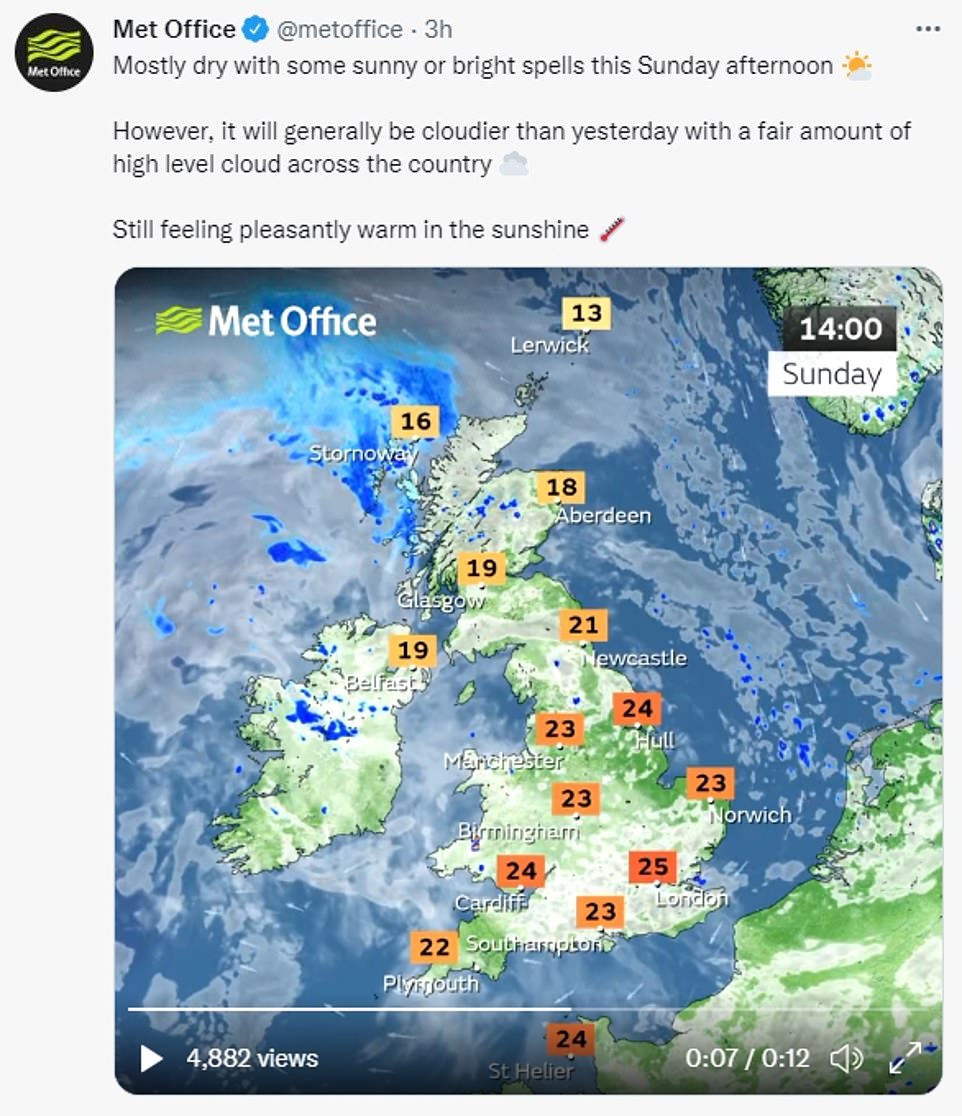 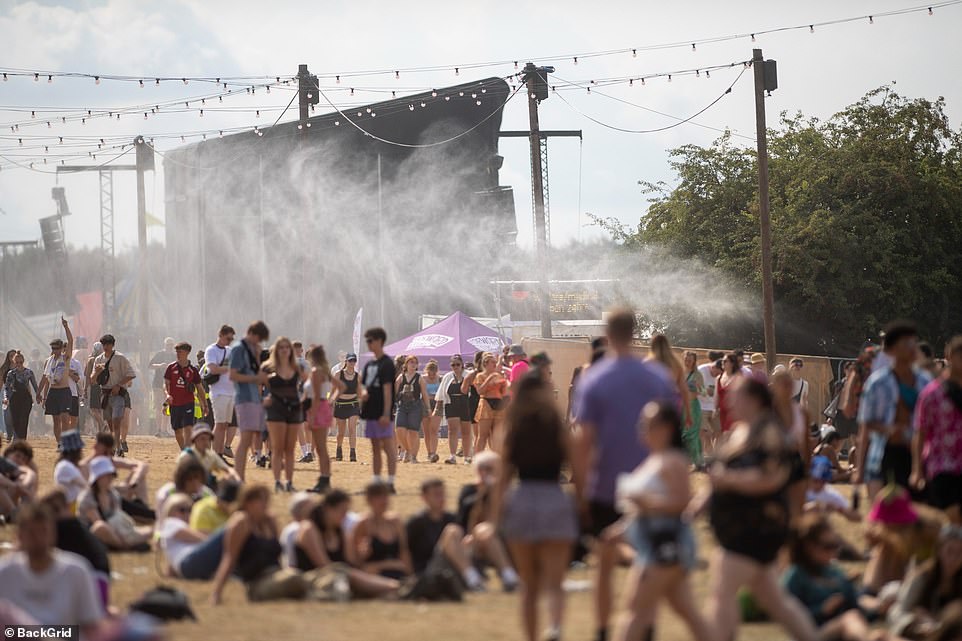 The parched ground has stayed dry at Leeds Festival this weekend, with revellers enjoying the warm weather in their shorts 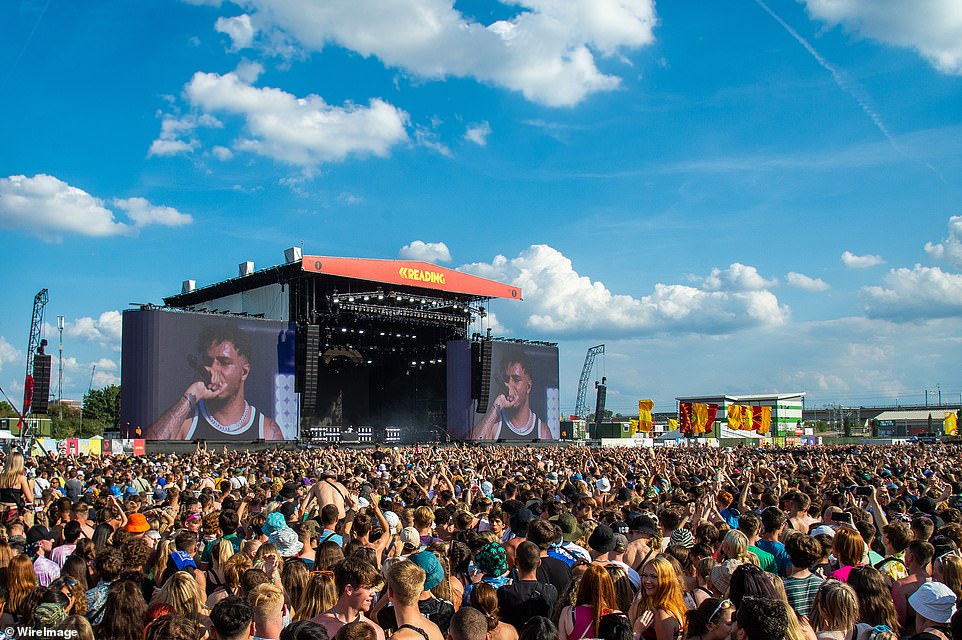 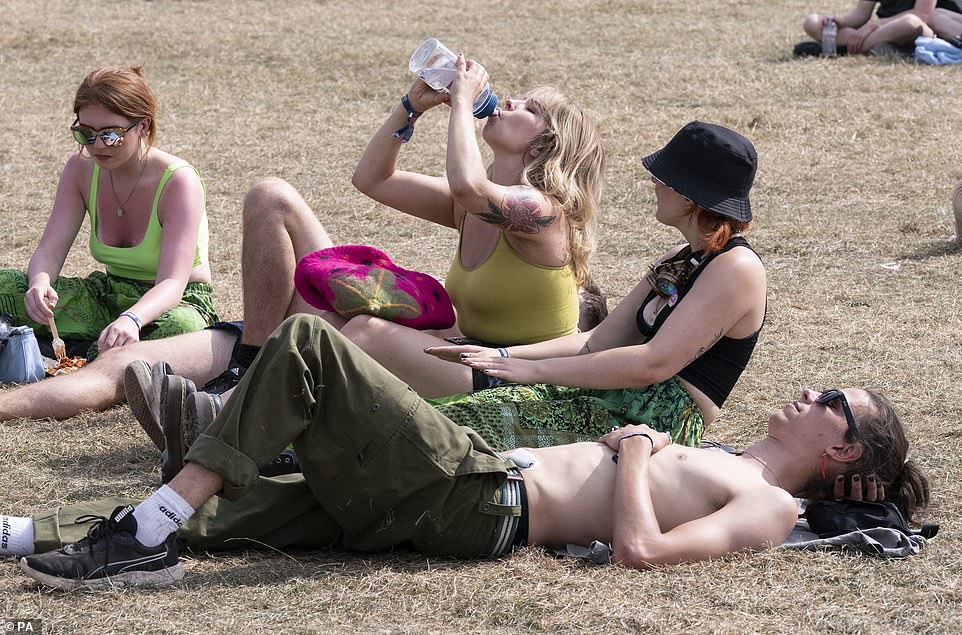 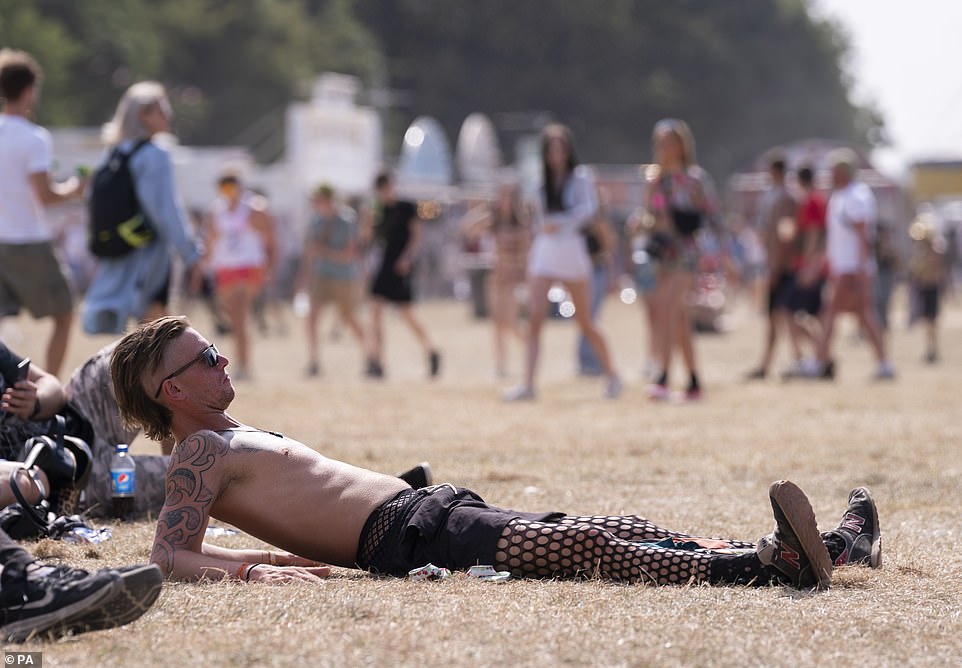 A man lies on the dead grass at Leeds festival on Sunday, enjoying the warm temperatures and sunshine 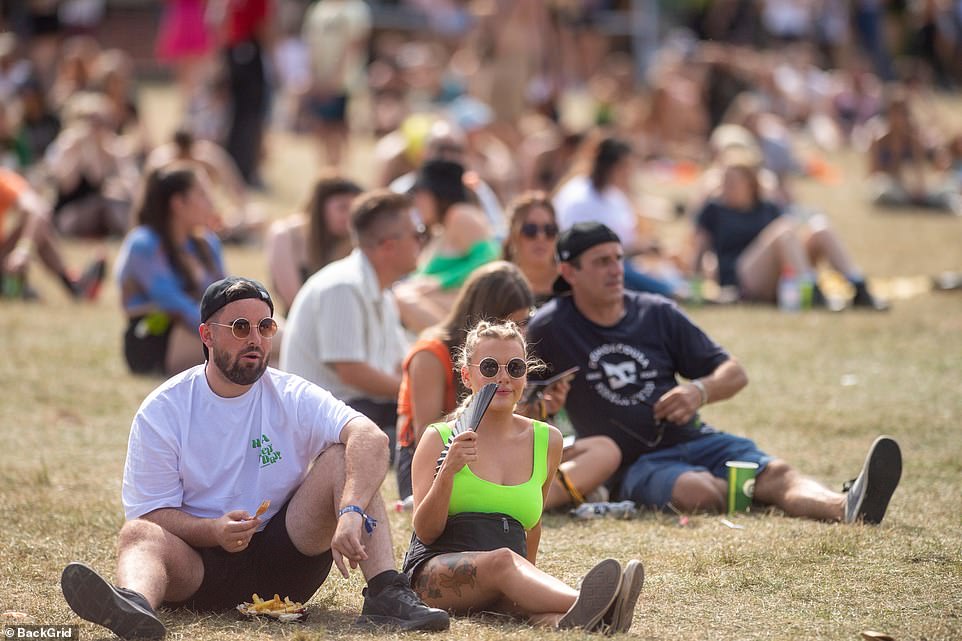 A woman fans herself to keep cool in the sun, as thousands enjoy the last day of live music at Leeds Festival 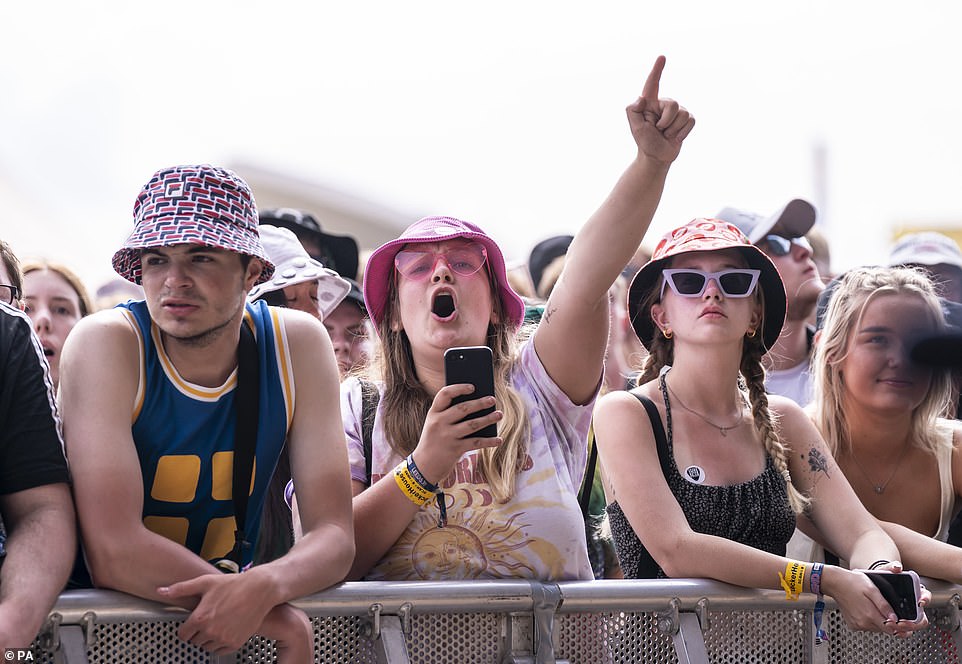 Revellers in Leeds stand at the barrier as acts perform at the annual music festival, held on the Bank Holiday weekend 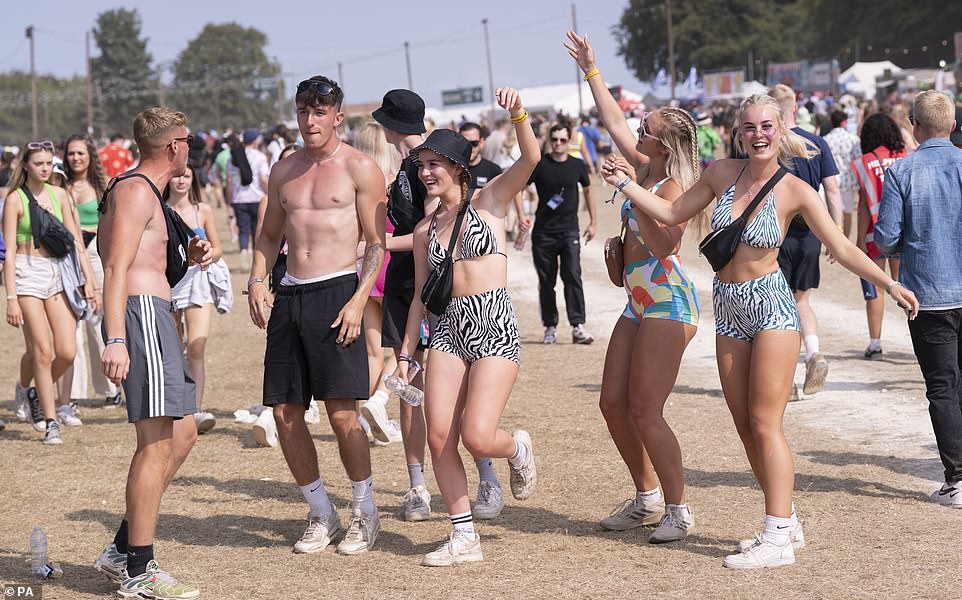 A group of festivalgoers enjoy the sunshine in their shorts while at Leeds Festival today, where temperatures stayed warm 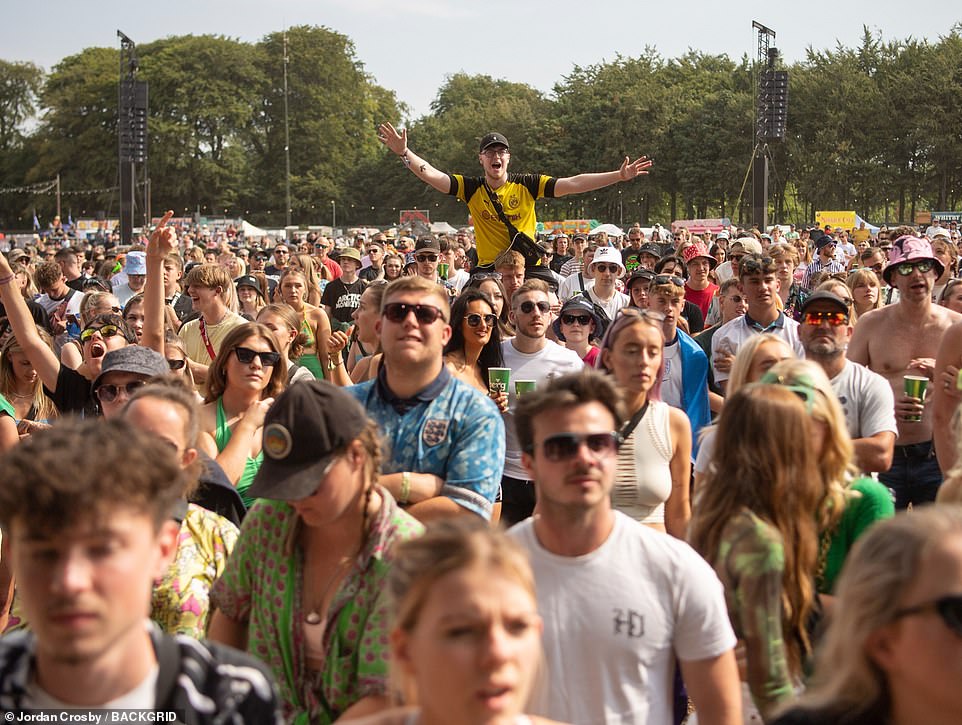 A crowd at Leeds Festival look on as the acts continue into the afternoon and evening, rounding up three days of live music 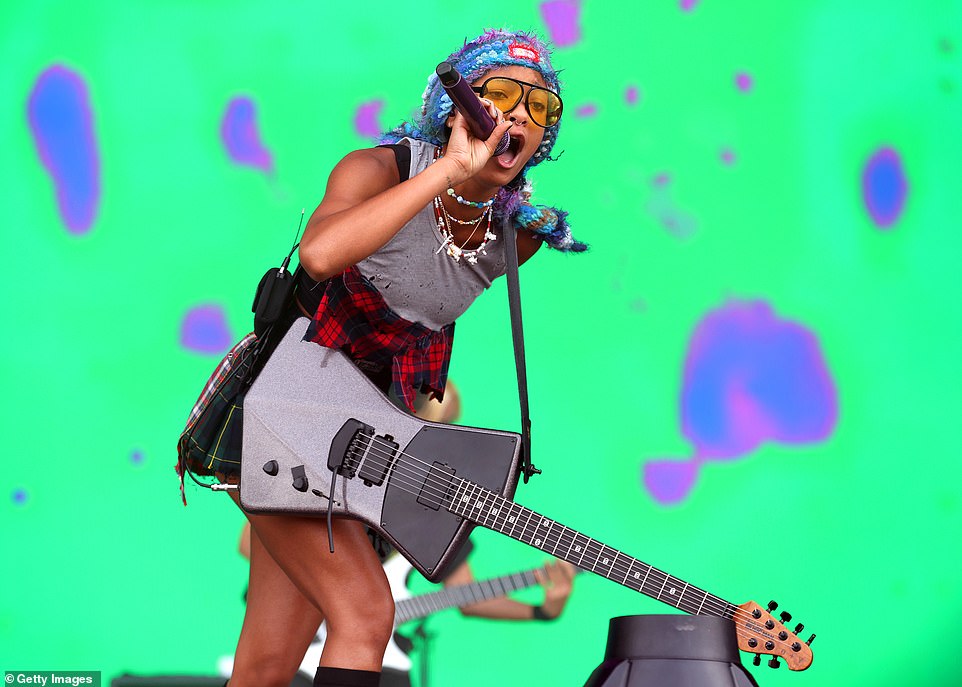 A Met Office spokesperson told MailOnline: ‘For much of the UK, high pressure will dominate the Bank Holiday weekend.’

‘There is a risk of one or two showers on Sunday, and it will again be cloudier in Scotland and Northern Ireland.

‘On Bank Holiday Monday, there is a bit of a split between the south west and north east. It will be cloudier overall but the best of the sunshine will be seen in western areas such as Wales.

‘Further north-east it will be cloudier with a higher risk of showers, particularly in the north east of England.

‘Temperatures will be a bit chillier in the north under the cloud, we’re looking at in the teens to low 20s, but we will still see high temperatures of up to 25C in the south east and south west.’

If this happens, it will make the UK as hot as Lisbon, Portugal.

Tens of thousands of revellers have been at the Reading and Leeds festivals between Friday and Sunday, with the rapper Dave and the Arctic Monkeys among the headliners.

Festivalgoer Rod Leith, 65, said that he has seen the weather improve at Reading Festival over recent years.

He said: ‘I’ve been coming here since 1976. The festival now is larger, and the music has become more diverse, but other than that it’s much the same as it always was. There are more stages than there were, and the weather seems to be much better these days.’

The festival-goer added: ‘I keep coming back because I have an emotional attachment to the festival, and it’s a cumulative experience — you re-live old festivals at the same time as enjoying the old one. It keeps you feeling young, although you’re not.

‘You are only as old as you feel, in as much as me as a 66-year-old isn’t that much different to me as an 18-year-old, other than I know more stuff than I did then. I’m the same person, coming to the same festival, having the same experience, enjoying it in very much the same ways.’

Meanwhile, the Notting Hill Carnival in west London returned from Saturday to Monday for the first time since the pandemic, with two million people expected to celebrate.

Revellers will see dry weather continue into the evening with late sunny spells. The evening is expected to stay largely dry with some areas of cloud building in from the north, forming patches of mist.

There may also be some patchy rain across northern England and north Wales, with an isolated shower in the far southeast possible. 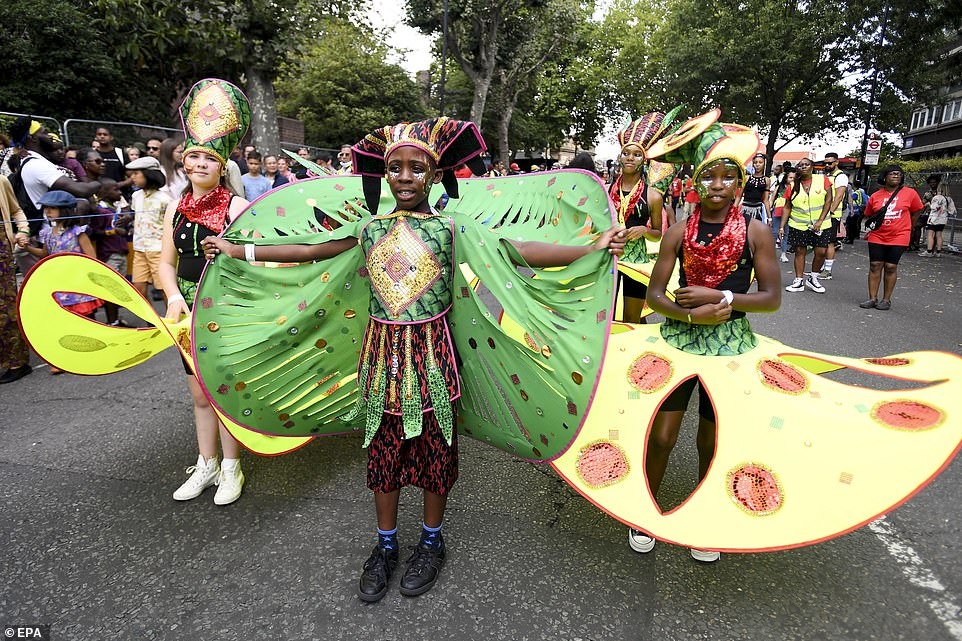 Young children get ready to dance together through the streets of London in green, yellow and red 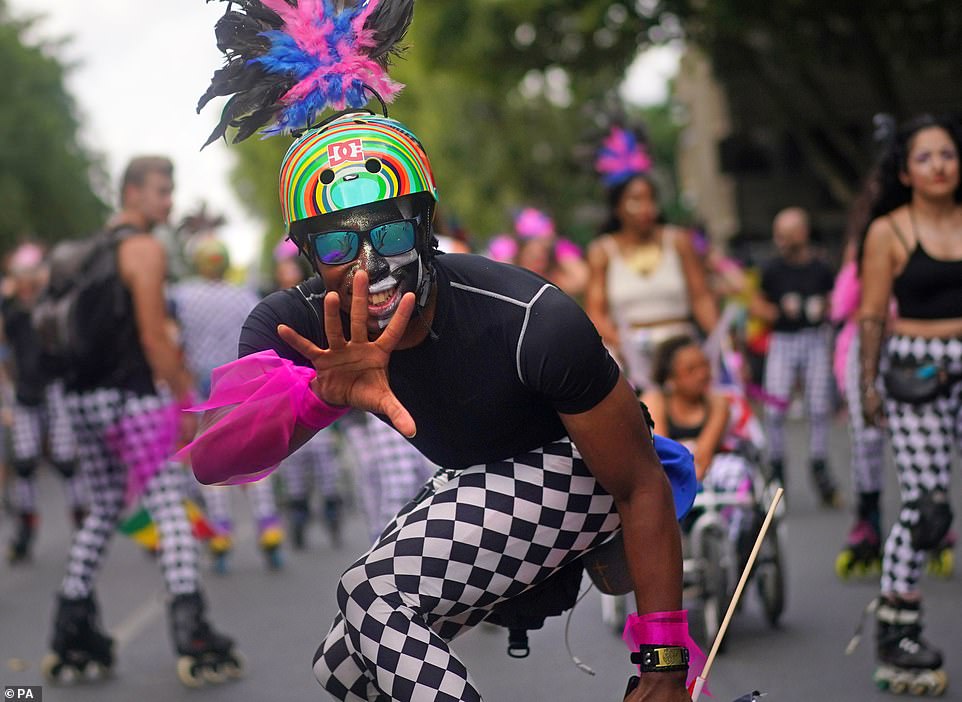 Rollerskaters joined in the parade through Notting Hill today, decorated with glitter and pops of colour 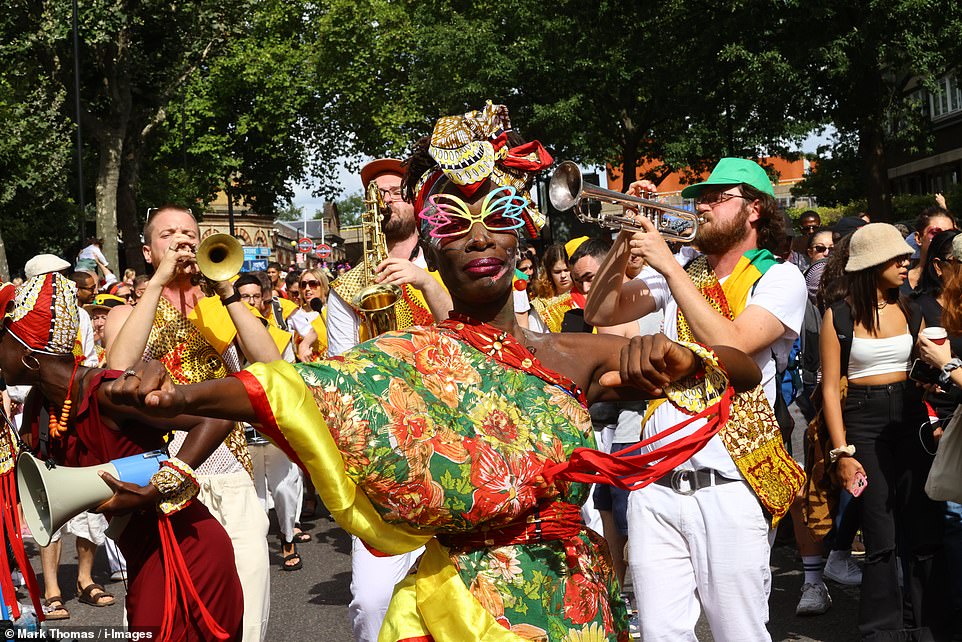 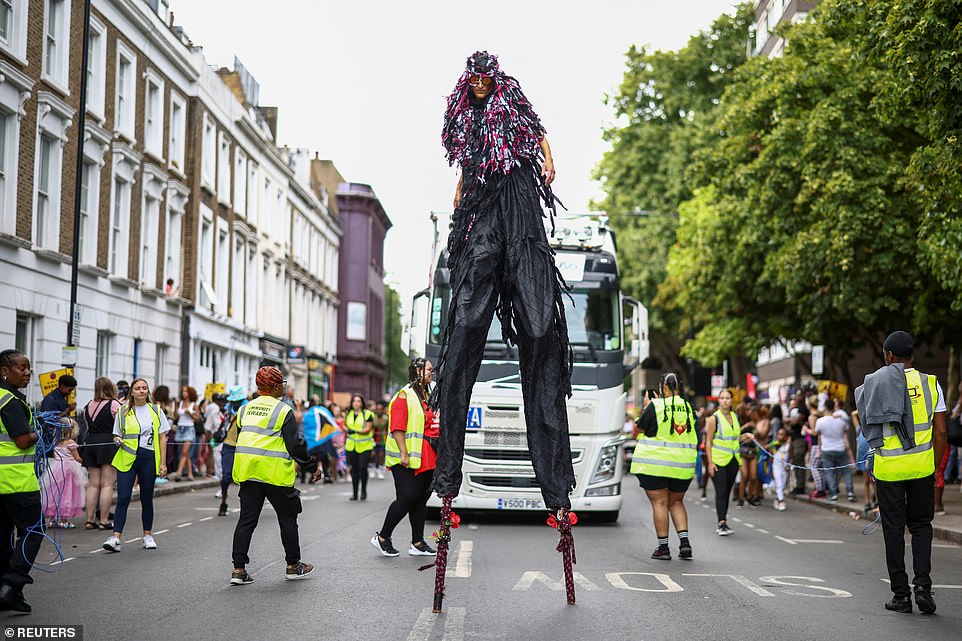 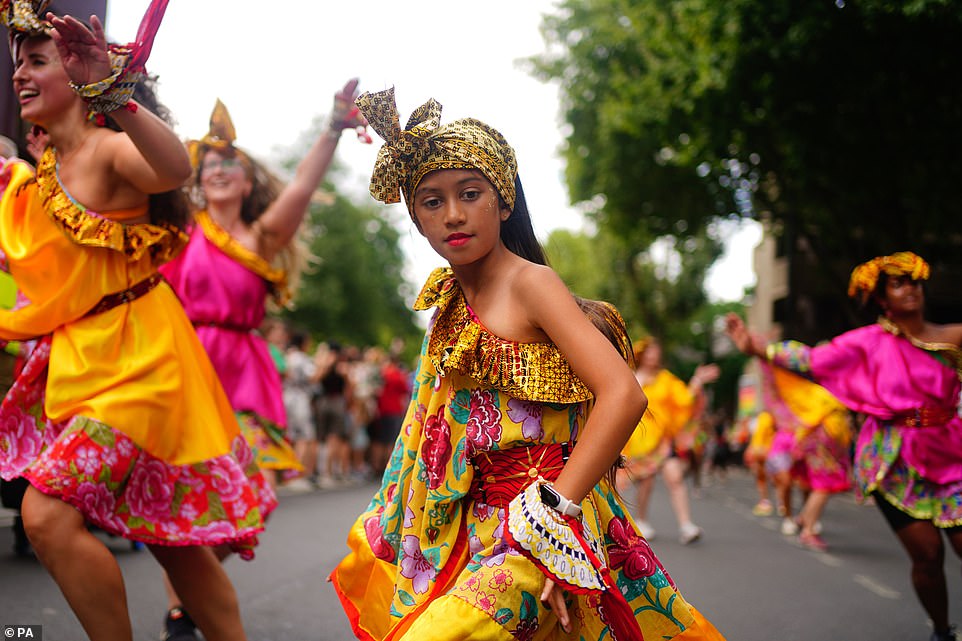 Children are taking centre stage at the parade this morning, as Sunday has long-been a family orientated-day at the carnival 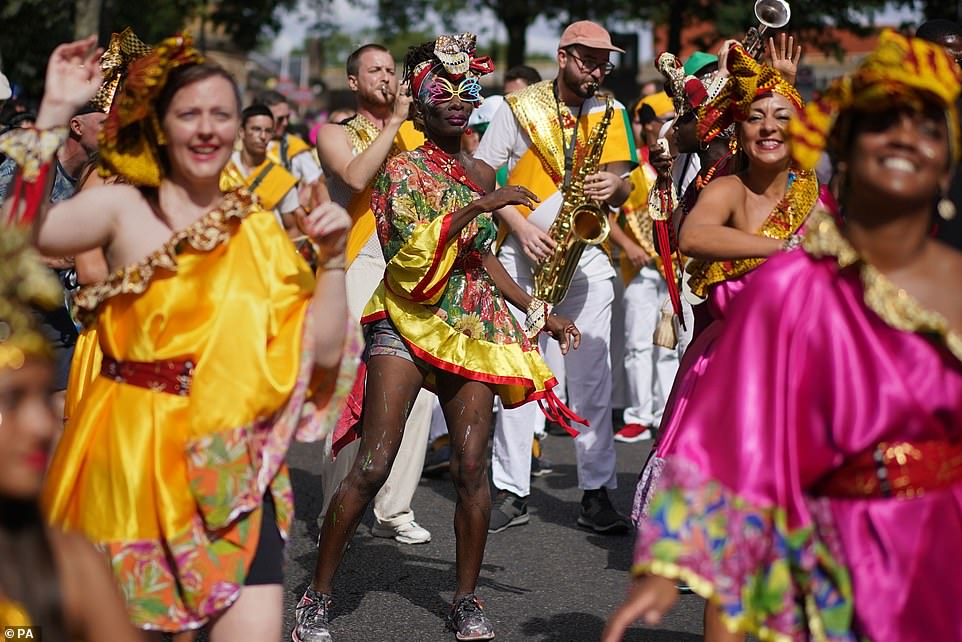 Musicians, dancers and performers gather on west London’s streets in the first parade in three years

On Bank Holiday Monday, the early patches of mist will be quick to clear, with dry weather and sunshine — albeit cooler than today.

Temperatures could peak at 75.2F (24C) in the south west of the UK, with cooler temperatures of 59F (15C) towards the north of the country.

There may be some rain to the north, but this is expected to clear quickly, with some light showers expected in north Scotland.

Tuesday is expected to be fairly settled. There will be cloud in places, with a few daytimes showers expected in the east of the country. These will be broken up with the sunshine, which will remain more prominent in the west.

Going into next week high pressure will hold on with largely settled weather. But the Met Office does forecast more unsettled weather by next weekend coming in from the west. This could result in wetter and windier weather.

Although dry weather is good news for those at Leeds and Reading, it’s bad news for the UK’s ecosystem.

As of Wednesday, the UK had only 46 per cent of the average total rainfall for August and 30 million people are currently living under a hosepipe ban.

The ongoing dry weather has seen drought declared across swathes of England, with parched grass and struggling crops, streams drying up and river, reservoir and aquifer levels low, and hosepipe bans brought in for millions as heatwaves pushed up demand for water.

Forecasters are yet to spot a sustained period of above-average rainfall, which is needed to end the drought.

Meanwhile motorists are being warned to expect widespread disruption during another weekend of busy travel.

The AA and RAC have already warned of potential gridlock on some key motorways and major A-roads across the Bank Holiday. Network Rail also urged train passengers to check before they travel as track and signalling upgrades mean several lines will either be closed or have reduced timetables.

Tens of millions will be on the move during the course of the bumper weekend of events. Reading and Leeds festivals will draw to a close tonight, with revellers packing up tomorrow, and Notting Hill Carnival in west London started yesterday evening.

The Birmingham Weekender and Cardiff and Manchester Pride events are also held over the Bank Holiday.