Female football fans cover up at Qatar: Women reveal how they have been wearing conservative clothes and even the veil to avoid offending World Cup hosts

Female football fans at the Qatar World Cup have revealed how they have opted to dress modestly with some even resorting to wearing the veil.

Dozens of female fans who have travelled from across the globe for the tournament told MailOnline that they had dispensed with shorts, mini skirts, vests and other clothing that exposed their bodies in order not to offend Muslim sensibilities.

Katie Owen, 25, who is the daughter of actor Jonny Owen, is a DJ who is in Qatar as an ambassador for Wales.

She said: ‘I’m currently dressed in dungarees even though it’s quite warm. Of course it’s important to be respectful of the local culture.

‘I’m dressing differently than I do in Wales but that’s OK. I’m having a great time in Qatar representing Wales but I’m mindful of how I dress.’

She added: ‘I’m DJing at an event later this week and one thing I’ll make sure I’m wearing is the Wales football jersey.’ 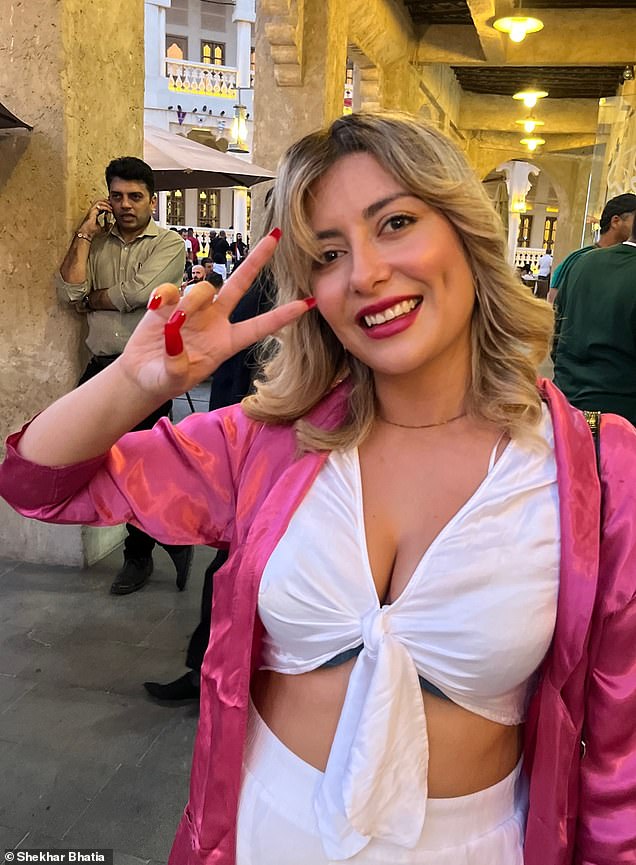 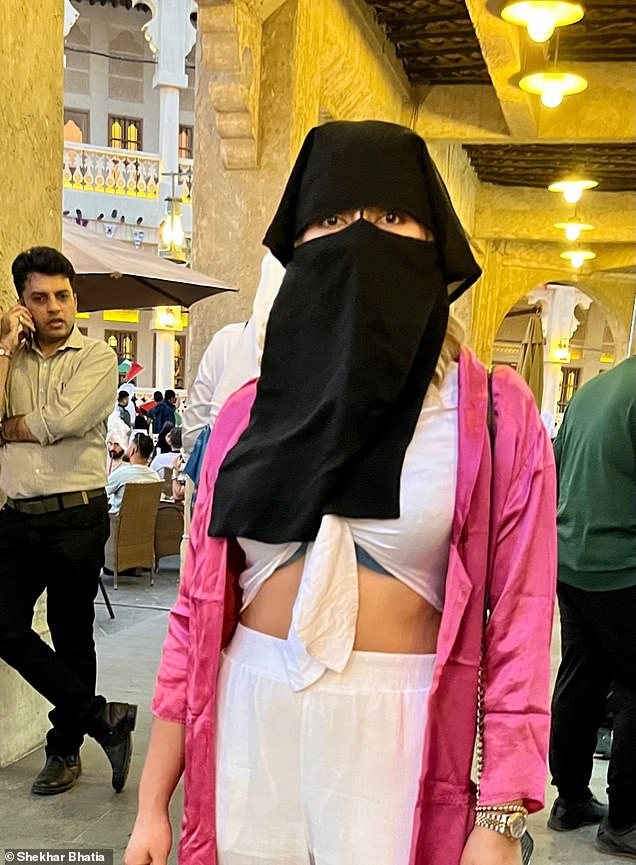 Before and after: Genesis Polit, 30 from Quito shows how she covers up for Qatar regulations 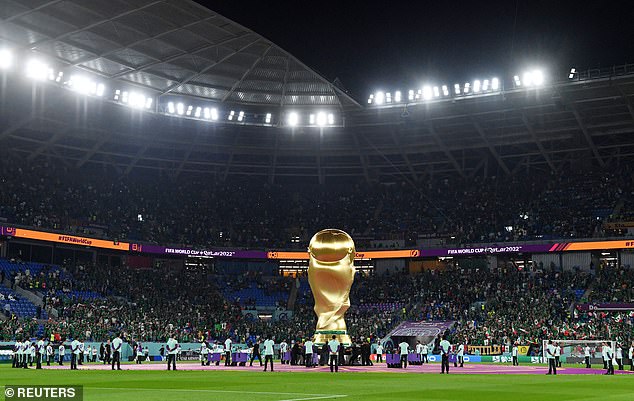 Mexico v Poland – Stadium 974, Doha, Qatar – November 22, 2022 General view of a giant replica trophy on the pitch before the match

Two Ecuadorean female fans admitted that they were so concerned about offending Islamic dress laws that some local women advised them to wear veils.

Genesis Polit, 30 from Quito said: ‘I was very concerned before coming that I would offend the locals because I usually wear shorts and mini skirts.

‘A local woman suggested I put on a veil. I love it because it shows off my beautiful eyes. I think the Qataris respect the fact that I’m sympathetic to their culture.’

When asked about why she was happy to expose other parts of her body while wearing her veil, she replied: ‘I was told that it’s OK to do this. The important thing is to cover your face. I know my midriff is showing and so is my cleavage but I don’t think that’s a problem.’ 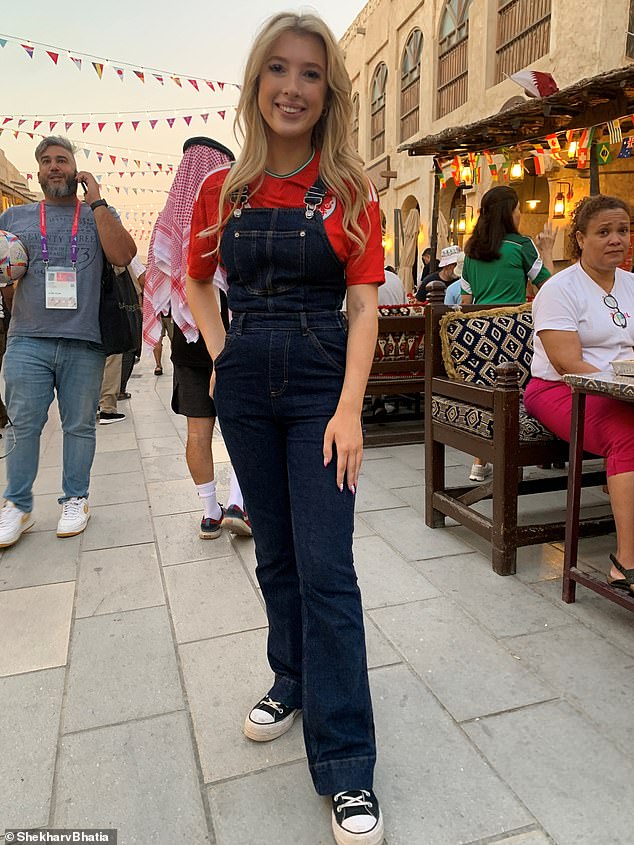 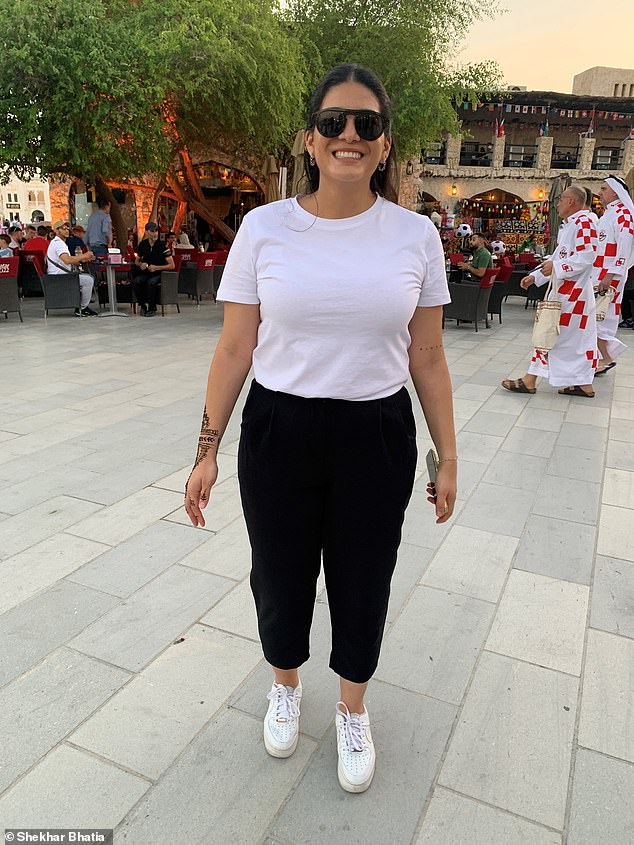 Her friend Fatima Navarro, 28 added: ‘I love my veil. I even wore it to the stadium the other night for the World Cup opening game.

‘I’ve been asking locals if me wearing a veil but showing off my legs is disrespectful but they said no. I’m here to learn and show my support for Islamic culture.’

Alejandra Lobsto, 26 from New York said: ‘I haven’t brought any shorts, mini skirts or any other revealing clothing. Normally that’s the kind of stuff I would wear in this heat.

‘I don’t want to disrespect the local culture. It’s my personal choice and I don’t want to do anything to offend Qataris and other Muslims. I think a lot of female football fans feel the same.’

Her friends, Daniella Lobato, 28 and Nicole Charpenther, 33, from Equador agreed.

Nicole added: ‘Before I came here I was getting very stressed about what clothes I should bring. I’m very aware that this is a Muslim country and the dress code needs to be respected.’

Nicole said: ‘I’ve not bought any short stuff but that’s OK. Qatar is a wonderful place and the locals are very gracious and I don’t want to offend them in any way.’