Helsinki: Many Finnish pharmacies ran out of iodine tablets on Wednesday, a day after the Nordic country’s health ministry recommended that households buy a single dose in a case of a radiation emergency amid increasing fears of a nuclear event due to Russia’s war in Ukraine.

“An accident at a nuclear power plant could release radioactive iodine into the environment, which could build up in the thyroid gland,” the Finnish Ministry of Social Affairs and Health said on Tuesday. 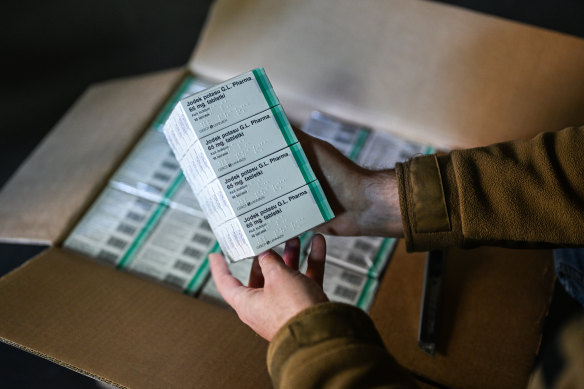 Fears for the region: a firefighter opens a box full of Iodine tablets in Poland. Credit:Getty

Chemists in many locations in Finland reported on Wednesday they had run out of iodine tablets as citizens rushed to purchase the medicine. Drug wholesalers also said their stockpiles were emptied out.

The ministry said the iodine tablet recommendation is limited to those aged 3-40 because of the potential risks that radiation exposure poses to that age group.

The ministry didn’t mention Russia’s war in Ukraine and didn’t disclose where such nuclear accidents could potentially take place. It only said it had revised guidelines on the use of iodine tablets to match the latest iodine recommendations set by the World Health Organisation.

However, Petteri Tiippana, director general of the Radiation and Nuclear Safety Authority of Finland, told the Finnish newspaper Ilta-Sanomat there was a link between the update and the situation in Ukraine.

“Yes, the war in Ukraine has influenced the updating of the instructions,” Tiippana told the newspaper. “People must have up-to-date instructions should such a need arise.”

In a case of a radiation emergency, sheltering indoors is the main way for people to protect themselves from hazardous radiation, the Finnish health ministry stressed.

Fears of a nuclear event in Ukraine continue after Russian President Vladimir Putin hinted heavily last week the use of such weapons were an option.

“A five-storey residential building was hit, the two upper floors were completely destroyed, the rest – under rubble. Rescuers are working on the site,” Mayor Oleksandr Senkevich said in a social media post, adding the southern city was “massively shelled”.

A shipbuilding centre and a port on the Southern Bug river off the Black Sea, Mykolaiv has suffered heavy Russian bombardments throughout the war. 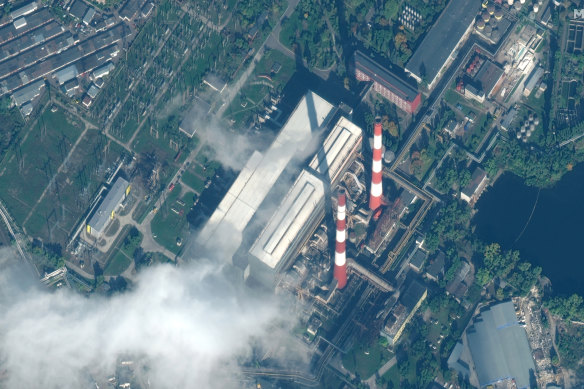 A satellite photo of damage to a power station in Kyiv, Ukraine.Credit:AP/Maxar

Only four countries joined Russia in voting against the resolution – Syria, Nicaragua, North Korea and Belarus. Thirty-five countries abstained from the vote, including Russia’s strategic partner China, while the rest did not vote.

Ukrainian President Volodymyr Zelensky said on Twitter he was “grateful to 143 states that supported historic #UNGA resolution …(Russia’s) attempt at annexation is worthless.”

As his forces have lost ground since September, Putin has intensified the conflict, ordering the call-up of hundreds of thousands of reservists, proclaiming the annexation of occupied Ukrainian territory and repeatedly threatening to use nuclear weapons to protect Russia. 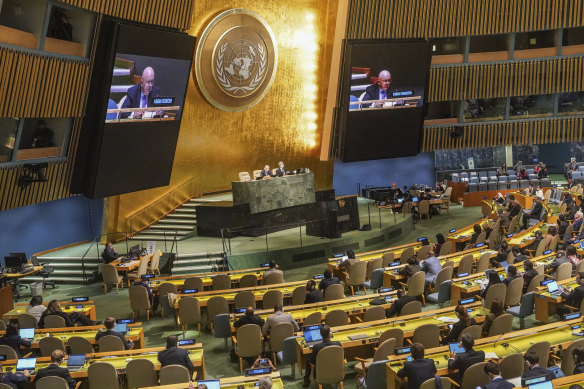 US President Joe Biden said on Wednesday he doubted Putin would resort to that. Putin is a “rational actor who has miscalculated significantly”, he told CNN, saying he believed the Russian leader had expected his invading troops to be welcomed.

A senior NATO official said a Russian nuclear strike would change the course of the conflict and almost certainly trigger a “physical response” from Ukraine’s allies – “and potentially from NATO itself.”

Zelenskiy said Ukraine needed about $US55 billion in financial support next year – $38 billion to close the budget deficit and $17 billion to rebuild critical infrastructure such as schools and housing.