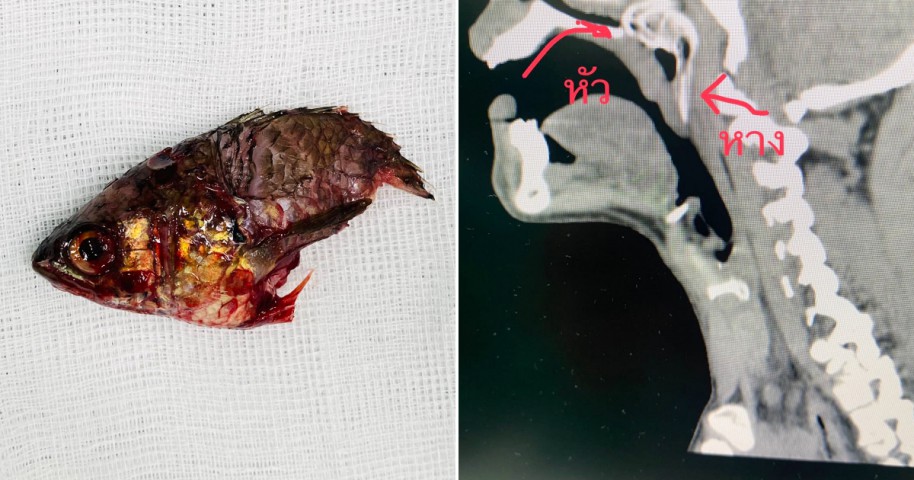 A fisherman was left needing surgery after a freak accident saw his catch get stuck in his throat.

The spiky Anabas fish leapt out the water and straight into the unlucky angler’s mouth in Thailan.

When he arrived at hospital, it had lodged itself between his throat and nasal cavity after wriggling up through his nose.

Doctors at Phatthalung Provincial Hospital were baffled when scans revealed his unlikely story was true on May 22.

It took an hour of surgery involving two doctors and three nurses to get the five-inch fish out of there.

‘They have successfully saved the patient.’

The doctors pulled the fish from the his mouth as it was trying to wriggle out of his nose.

The unidentified patient had been spike-fishing with a harpoon under the surface of the water when it happened.

He said the fish jumped into his mouth when he came up for air and opened wide for a big intake of breath.

At the same moment, the fish launched out of the surface of the water and straight down his gullet

The fish was stuck in his mouth and squeezed down his windpipe.

He was rushed to the hospital after onlookers saw him appearing to gasp for air as he held his throat.

The fisherman was treated and is now in stable condition and recovering at the hospital from his operation wounds.

Hospital officer Sermsri Pathompanichrat added: ‘The chances of this happening are very low. I have never seen this kind of case before.’