Five people have now been charged with murder over the “cowardly” fatal stabbing of a 17-year-old boy outside a Waikiki party on Saturday night.

Chikayne Heslip died after being attacked by a group of young men around 11.30pm after more than 100 people from a house party spilled out onto Porpoise Grove. 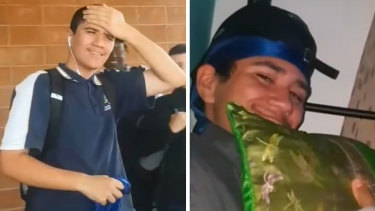 This was on top of the three males who had previously been charged, bringing the total charged with murder over the death to five.

It was the second major homicide in the region on Saturday evening following the suspected sniper shooting of former Rebels boss Nick Martin in Kwinana three hours earlier.

WA Police State Crime Assistant Commissioner Brad Royce said: “Most families wouldn’t expect to send their 17-year-old to a party and have police turn up with that sort of news,” Mr Royce said.

“We do have violence at some of these parties, the parties get out of hand.

“Social media is the way they do it now, once you’re on social media the party expands, the numbers expand, the people managing the party aren’t always prepared for those sort of numbers and have to shut things down and a lot of the trouble occurs outside the party and that’s the case on this occasion.”

Mr Heslip’s devastated family released a statement on Thursday, remembering their loved one as a hero.

“Our understanding is Chikayne died protecting his mates and in our eyes he’ll always be a selfless hero, you’ll always be remembered as our hero.”

Mr Royce confirmed initial investigations had indicated the Ellenbrook teen had gone to help friends outside the house and it “resulted in him being chased” in a cowardly attack.

The three charged males will face court on Thursday.

Each has been refused bail.