Boris Johnson has warned the weary British public to summon their resolve for a tough winter ahead, as he refused to rule out a second national lockdown to contain the spread of the coronavirus.

Speaking in a televised address after announcing new rules across England he appeared to suggest “freedom-loving” Britons will be to blame if more draconian restrictions are applied.

“If people don’t follow the rules we have set out, then we must reserve the right to go further,” he said.

The new restrictions for England include a 10pm closing time for pubs and restaurants, a renewed ban on indoor team sports, and stricter rules on mask-wearing.

They come in addition to the “rule of six” limiting the size of social gatherings, and a complex patchwork of local restrictions across the UK.

Office staff in England will also be urged to work from home where possible, less than a month after Downing Street said it was planning an advertising campaign to tempt them back into the workplace.

The new regime led to immediate calls for fresh emergency financial support for the worst-affected sectors.

While Johnson set out the latest warnings from scientific advisers about a deadly second wave, and said the measures could be necessary for six months, the restrictions he announced fell far short of those in Scotland.

Introducing an outright ban on households mixing at home, the first minister, Nicola Sturgeon, told MSPs at Holyrood her priority was to “address the key driver of infections”, saying both social distancing and good ventilation are hard to maintain in domestic visits.

Sturgeon urged the Scottish public to “try to keep smiling, keep hoping and keep looking out for each other”. 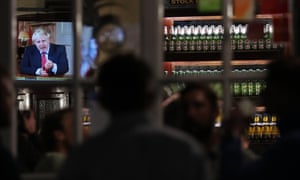 “Now is the time for us all to summon the discipline, and the resolve, and the spirit of togetherness that will carry us through.”

His stark warning to the public contrasted with the view of the Labour leader, Keir Starmer, who said in his party conference speech that a second lockdown would be “a sign of government failure, not an act of God”.

The new measures for England come after a weekend of tense debate among cabinet ministers and scientists and were softer than those mooted in advice from experts in recent weeks, which had included a two-week full lockdown as a “circuit-breaker”.

With a rebellion already brewing in advance of next week’s six-month renewal of the emergency coronavirus legislation, Tory whips had been canvassing support among restive backbenchers about what level of fresh restrictions they would be willing to support.

“Number 10 is caught between a rock and a hard place here, and I know that they need to be seen to take action for a variety of reasons,” Bradley said. “What I’m very conscious of though is a general feeling among many of my constituents that they don’t want further restrictions.

“Of course from an ideological perspective neither I nor most colleagues are naturally comfortable with ‘big government’ and draconian measures, nor is that what the public voted us in for. I think we’ve perhaps reached the point where we’d find it really difficult to sell much more than this to our constituents.”

One new-intake Conservative MP said: “The mood from colleagues and from my constituents is, ‘this far and no further’.”

Business groups were taken aback by the signal from Downing Street that restrictions are likely to last until next spring.

Kate Nicholls, the chief executive of UK Hospitality, called the latest measures a “crushing blow”, while the Bank of England governor, Andrew Bailey, urged the chancellor, Rishi Sunak, to “stop and rethink” plans to end the job retention scheme for all sectors at the end of next month.

Julian Knight, chair of the culture select committee, said: “Today’s developments make unarguable the need to extend beyond October the furlough scheme which offers a lifeline for many who work in the arts and leisure sectors, a case we have already made to the chancellor.”

Tracey Crouch, the former sports minister, has also called for further support measures. “Sport is a complex ecosystem that contributes billions to the economy both directly and indirectly,” she said. “Without financial support we could see parts of the sector decimated and lost forever.”

Nickie Aiken, the Conservative MP for the Cities of London and Westminster, said the impact on local businesses “will now be overwhelming” and called for an urgent rethink of support available.

She said cafes and bars could be forced to close by the cumulative impact of fewer customers and restricted hours, and that the conference and events sector was “reeling from the announcement that their work will not start on 1 October and potentially may not restart for six months”.

“The prime minister missed an opportunity today to revise the ‘rule of six’ which, as currently interpreted, allows members of six different household to meet indoors whereas previously members of only two households could do so,” he said.

“Data suggests that transmission between households is by far the biggest driver of infection and this should therefore be rectified at the earliest possible opportunity.”

Speaking in the House of Commons earlier, the prime minister had stressed the importance of protecting the economy, as well as saving lives. “This is a package to drive down the R [the reproduction rate of the virus], but also to allow education and jobs and growth to continue,” he said.

In tetchy exchanges, Johnson also repeatedly attacked Labour for criticising the test and trace system, which has led teachers and parents to complain about being unable to book tests for sick children, or being sent hundreds of miles.

Challenged over why Germany and Italy had achieved lower Covid-19 case numbers without renewed lockdowns, Johnson suggested it was because the UK was “a freedom-loving country”.

“It is very difficult to ask the British population uniformly to obey guidelines in the way that is necessary,” he added.

“It is clear that London has unique needs and challenges and additional measures need to be examined which are suitable for the capital.”