Four dizzying years ago, Trump blindsided us all. And today?

As voters brave the conflicted streets of the United States to cast their judgment on their nation’s presidency, we recall that precisely four years ago, Australia’s then prime minister, Malcolm Turnbull, turned up late and ashen-faced to speak at a dinner at the National Gallery of Australia.

“What an interesting night,” he quipped awkwardly to the 360 business leaders seated within the glittering reception hall, many of whom were as knocked sideways as Turnbull about the astounding events of the day.

“I’m sure everybody is focused on the agenda tonight and not paying much attention to what’s been happening in the United States.” 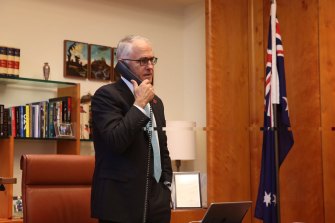 What had been happening, of course, had shaken the world, and would turn it ever-dizzier over the next four years.

Turnbull, like almost everyone, was not prepared for Donald Trump to defeat Hillary Clinton to become President of the United States of America.

No less than the President of the time, Barack Obama, had promised Turnbull that Trump could not win the election.

“Don’t worry, Malcolm. The American people will never elect a lunatic to sit in this office,” Turnbull, in his book A Bigger Picture, would report Obama as saying.

The world has become almost unrecognisable in the four years since and Trump is trying to do it all again.

This time he is opposed by Obama’s vice-president, the laid-back Joe Biden, who made a relaxed visit to Australia three months before the 2016 election bombshell.

Three former prime ministers – Bob Hawke, John Howard and Tony Abbott – turned up to hear Biden speak in Sydney, giving him the opportunity to point out their periods as leaders had all overlapped his 44 years of service in government. 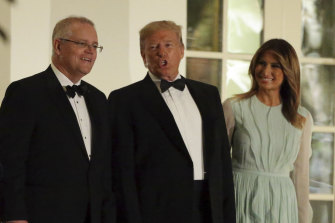 Scott Morrison with President Donald Trump and Melania Trump at a state dinner in 2019. Credit:Alex Ellinghausen

Trump has thrown precisely two state dinners for foreign leaders during his time in the White House.

The first was for the President of France, Emmanuelle Macron (before the relationship turned sour).

The second and last was for Scott Morrison. The two got on well, it was widely reported.

Whether Trump or Biden win now, however, Morrison isn’t about to be blindsided.

He has been all but mute for days now, and unlike Turnbull those years ago, he has no plans for any imminent speech-making.

Understand the election result and its aftermath with expert analysis from US correspondent Matthew Knott. Sign up to The Sydney Morning Herald‘s newsletter here, The Age‘s here, Brisbane Times‘ here and WAtoday‘s here.