France records 208,000 cases in one day as Omicron batters Europe 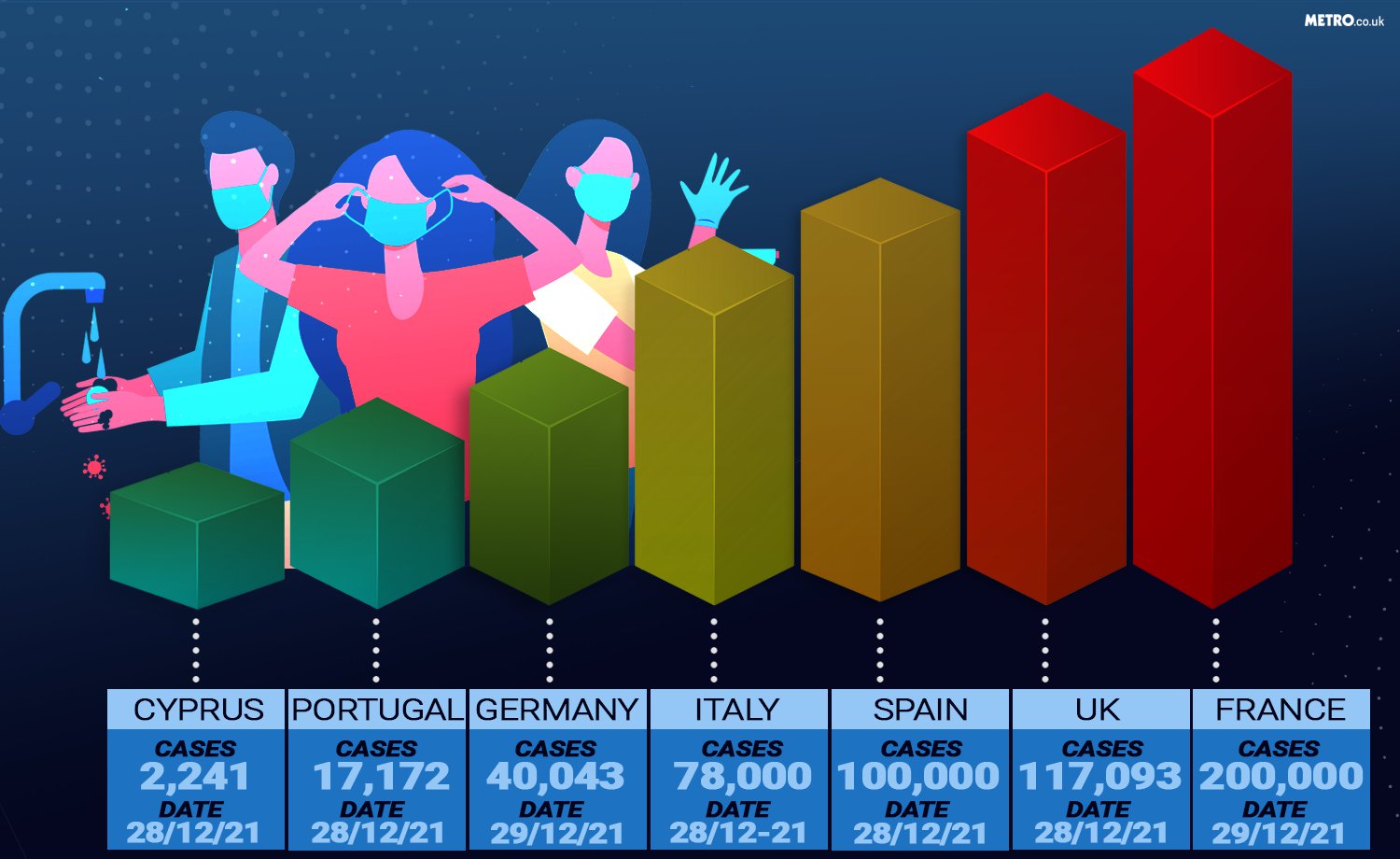 France reported 208,000 cases on Wednesday, up from the country’s previous record of 180,000 daily cases set on Tuesday.

France has vaccinated 77% of its population and is rushing out booster shots, but more than 4 million adults remain unvaccinated, including more than 1 million people over age 65.

Veran said that in Paris public hospitals, 70% of people in intensive care units are unvaccinated.

He has warned those not yet been jabbed: ‘There is really little chance that this time you can escape (Covid-19). The virus is spreading too fast.’

Earlier this week the minister warned ‘everything suggests’ France could see as many as 250,000 cases a day by the start of January.

In a bid to control the outbreak, restrictions requiring people who can work from home to do so for at least three days a week from next month have been announced.

The country’s booster jab roll-out has also been ramped up, with more than 23 million doses delivered so far.

But France is not alone in struggling to contain surging rates of infection.

As of yesterday, cases in Italy have topped 78,000, the highest to date, Cyprus reported a single high record number of infections on Tuesday with 2,241 new cases and Portugal also recorded a new total of 17,172 cases.

And, it is not just Europe where cases have reached record highs; the number of Covid-19 cases recorded worldwide increased by 11% last week compared with the previous week, with the biggest increase in the Americas, the World Health Organisation has said.

The UN health agency said in its weekly epidemiological report that there were nearly 4.99 million newly reported cases around the world from December 20-26.

Europe accounted for more than half the total, with 2.84 million, though that amounted to only a 3% increase over the previous week.

In Australia, cases spiked to nearly 18,300, on Wednesday eclipsing the previous pandemic high of around 11,300 reached on Tuesday.

While in the United States, the average number of daily Covid cases has also hit a record high over the past seven days.

Studies have suggested the Omicron variant is less deadly than some of its predecessors and leads to fewer people needing hospital treatment.

But the huge numbers of people testing positive mean that hospitals might soon be overwhelmed while businesses struggle to operate because of workers having to quarantine or be off sick.

Testing bottlenecks have also built-up European countries, including in the UK and Spain where demand for free covid testing kits provided by Madrid’s regional government far outstripped supply on Tuesday, with long queues forming outside pharmacies.

The surge in cases is coinciding with the New Year celebrations which is normally a period of parties and travel.

But as countries near the end of 2021, governments are adopting different approaches in a bid to reduce opportunities for the virus to spread.

Some such as Italy have cancelled public celebrations, while others have urged people to keep end-of-year gatherings small and to use common sense.

Cities – including Paris, London and Berlin – have cancelled official New Year’s celebrations, but governments have stopped short of bringing in nationwide restrictions.