Have the Russians Got It? 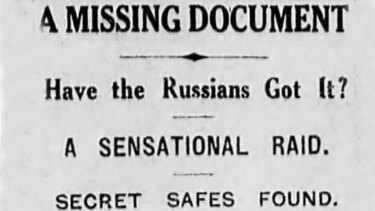 London, 15th May – An official account of the sensational police raid on the premises of Arcos (Anglo-Russian Co-operative Society) Ltd. Which also contain the offices of the Russian trade delegations, explains that an important document was missed from a Government office a few months ago, and that special detectives have since been searching continuously for it. In consequence of “information received” a few days ago the police obtained a warrant under the Official Secrets Act to search the Arcos premises primarily to ascertain if the missing document was in that building.

The work on the safes and strongrooms was continued throughout yesterday with very powerful apparatus for drilling the concrete surrounds and cutting the steel walls. According to the “Sunday Express” three more secret safes have been found on another floor skillfully secreted behind paneling. The vital document has not been found, but papers are regarded as very important have been discovered. It is believed in some quarters that these documents expose secrets of the Soviet organization throughout the world, and that others relate to the Soviet’s activities in Great Britain. The search and the translation of the papers are proceeding day and night.

After two hours’ work the police entered the first strongroom. In it they found a table and chairs which were presumably used for secret meetings. The other strongrooms are being forced, and then the locked safes will be attacked. 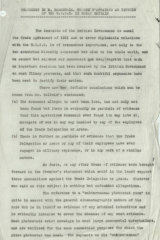 The first page of the statement by the Chargé d’Affaires of the USSR in Britain regarding the Arcos raid.Credit:Warwick Library – Trades Union Collection

There was great excitement when the crowd realized that the police were breaking into the safes. Additional forces arrived to escort the workmen who were clearing away the debris caused by the drills. Representatives of the firms who built the safes supervised the operations. The armed guard is still present. The police may be in occupation of the building for some days.

The secretary of Arcos remarked “they will find nothing of importance.” He said he saw of no reason for police action. If the company had been requested it would at any time have produced its papers – there was no necessity for this melodramatic and sensational method.

The “Daily Express” says the main reason for the raid was the fact that War Office documents have mysteriously disappeared recently.

The Soviet Charge d’Affaies, M. Rosengolz, visited the Foreign Office on Friday and remained with Sir Austen Chamberlain for half an hour. It is understood that he lodged a formal protest on behalf of the Soviet.

“These proceeding are a flagrant violation of Article Five of the trade agreement, which provides that official agents shall have liberty to communicate with their own Government and other official representatives of their Government in other countries, and receive dispatch couriers with sealed bags exempt from examination. Moreover, in accordance with Article One of the trade agreement the British Government undertook not to discriminate against such trade compared with the trade of any foreign country, but the very fact of the raid will inevitable injure Anglo-Soviet trade. Furthermore, during the trade the most elementary guarantees and demands of common decency were violated.

“The search began before the presentation of the warrant, which was only handed to the assistant director of Arcos, M. Sorokin, an hour after the commencement of the search. All the employees, men and women, of Arcos and the trade delegation were detained and searched, including women who possessed diplomatic passports – for example the wife of the Charge d’Affaires and the wife of the financial attached. The personal search of the women was made by male police. 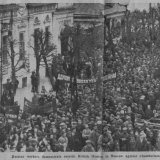 Russian workers demonstrate outside the British Mission in Moscow in protest at the Acros raids in London.

“I have informed my Government of all that occurred, and while awaiting its decisions and instructions I protest most emphatically against this violation of the obligations undertaken by the British Government in accordance with the trade agreement.”

It is authoritatively stated that M. Rosegolz is under a misapprehension as the exact meaning of clause 5 of the Anglo-Russian trade agreement. This clause specifies that the delegation’s official agent enjoys immunity from arrest or search, but it does not extend to the offices in his control. Furthermore, it is authoritatively declared that immunity is a privilege granted specially under the terms of the agreement.

The Soviet embassy announces that the Mauser rifles discovered in the building were samples of hunting rifles which Arcos exports under a license from the British Government.

The diplomatic correspondent of the “Observer” says: – “The raid has caused embarrassment at Downing-Street. The Foreign Office was not consulted prior to the raid, though it was bound to be of diplomatic importance. In some quarters it is admitted that the raid forced the Foreign Office to declare its policy toward Russia at a moment when it had special reasons for letting sleeping dogs lie. It seems as if the old controversy within the Cabinet has been forced to a climax.”

All the Paris newspapers comment on the raid on the Russian offices in London.

“Pertinax,” writing in the “Echo de Paris,” says “It is possible that the Soviet gang will be driven back to their native land.”

“L’Avenir” and “Figaro” urge France to follow the British lead.

“L’Oeuvre” says: “The Soviet shot so many in the defence of the principle that the State’s first duty is to provide for its own safety that it cannot be surprised now that the principle is also valid in the west”.

A crowd of 40,000 people made a demonstration in front of the British Mission's offices last night as a protest against the raid on Arcos Ltd., London.

The newspapers indignantly condemn the raid, which has termed a gross violation of the Anglo-Soviet agreements and of elementary international relations.

The "Pravda" says:- " This provocation was devised because the Pekin provocation failed. It is only one link in a policy of adventurous sabre rattling which may fatally affect international peace. It shows the difference between the rapacious policy of British Imperialism and the peaceful policy of the Soviet, which defends peace by all means in its power, and desires to carry on trade. On the contrary, Great Britain is preparing for a rupture with the Soviet."

The "Ekonomicheskaia Jizn" says:- "This confirms Great Britain's systematic activities for a blockade of the Soviet, but she is powerless to induce the Soviet to abandon the chosen path of economic co-existence in competition with the capitalistic world.”

Thu "lsvestia" says:—"The raid is the beginning of the realisation of the rupture threatened in Sir Austen Chamberlain's last Note. It deals a blow at the most vital nerve in mutual relations. The Soviet bogey is again raised to create a diversion and ensure the painless enactment of the Trade Union Bill. It is also a blow at the work of the Economic Conference. Great Britain's policy of rupture is pregnant with danger and grave complications hardly to the liking of British commercial and financial circles, which will suffer if the Soviet market is lost. The responsibility for the catastrophe will not fall on the Soviet, which is consistently striving for peace, but entirely on the British Government, which started with a forgery and ends with a pogrom."