GDP grew by 0.8 per cent in May but UK recovery slowed

GDP grew by 0.8 per cent in May as UK recovery continued and lockdown eased – but pace slowed and economy is still 3.1 per cent smaller than before Covid hit

The economy grew by 0.8 per cent in May as lockdown eased and the UK recovery continued – but the pace slowed.

GDP was up for the fourth month running as pubs and restaurants were able to reopen indoors.

However, the figure was much lower than for April, and below the expectation of many experts as the Indian – or Delta – variant inflicted more uncertainty.

UK plc is still around 3.1 per cent smaller than in February 2020 before the pandemic started to wreak havoc.

The ONS Deputy National Statistician for Economic Statistics Jonathan Athow said: ‘The economy grew for the fourth consecutive month, albeit at a slower pace than seen recently, but remains around three percent below its pre-pandemic peak.

‘Pubs and restaurants, who were again able to welcome indoor guests, were responsible for the vast majority of the growth seen in May. Hotels also saw a marked recovery as restrictions lifted.’ 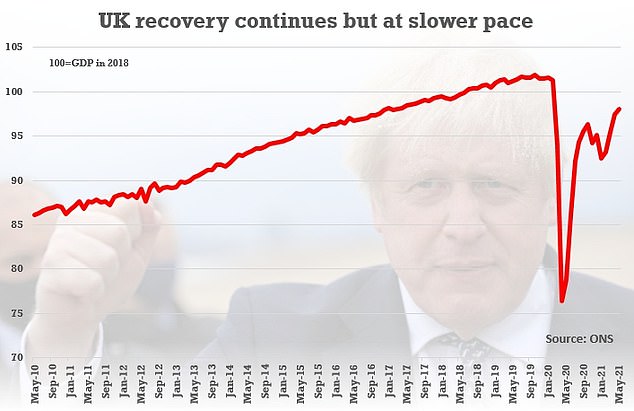 The service sector grew by 0.9 per cent in May, but the most striking figure was for accommodation and food service activities – which were up 37.1 per cent as restaurants and pubs welcomed customers back indoors.

The construction sector contracted for a second consecutive month by 0.8 per cent – but it was still 0.3 per cent above its pre-pandemic level.

Analysts had predicted the economy would report a 1.5 per cent increase for May.

Chancellor Rishi Sunak put a positive slant on the news, insisting it is ‘great to see people back out and about thanks to the success of the vaccine rollout’.

‘Our unprecedented package of support – including business loans, the furlough scheme and a reduced rate of VAT for the hospitality and tourism sectors – has protected millions of jobs and helped businesses survive the pandemic,’ he said.

‘And with the number of people on furlough halving in just 3 months as the economy reopened, it is clear our Plan for Jobs is working.

‘The Government is continuing to support the recovery, with the furlough scheme in place until September and schemes like Restart helping people who have sadly lost their jobs get back into work.’ 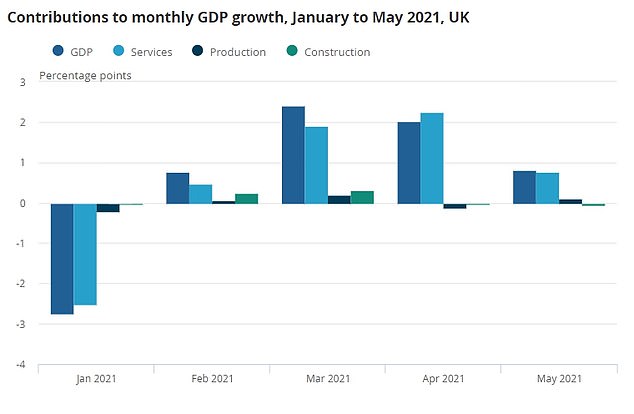 The service sector grew by 0.9 per cent in May, driving the overall increase in GDP