A couple in eastern France made an unexpected discovery while out for a walk earlier this year, stumbling upon a carrier pigeon message lost more than 110 years earlier.

Juliette and Jade Halaoui crossed through a field in Ingersheim, northeastern France, while out hiking in September and came across a tiny metal capsule.

Inside, was a well preserved message written by a Prussian solider in either 1910 or 1916. 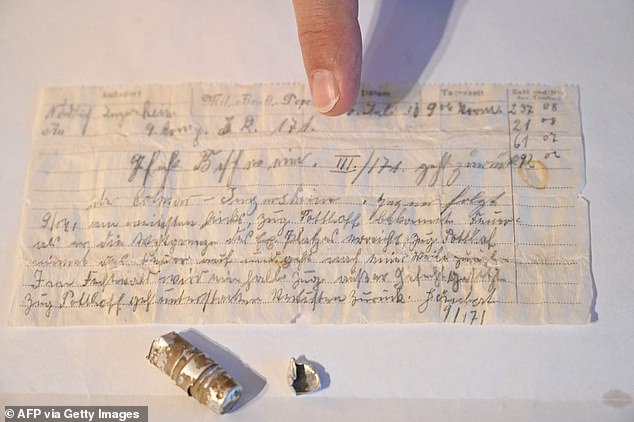 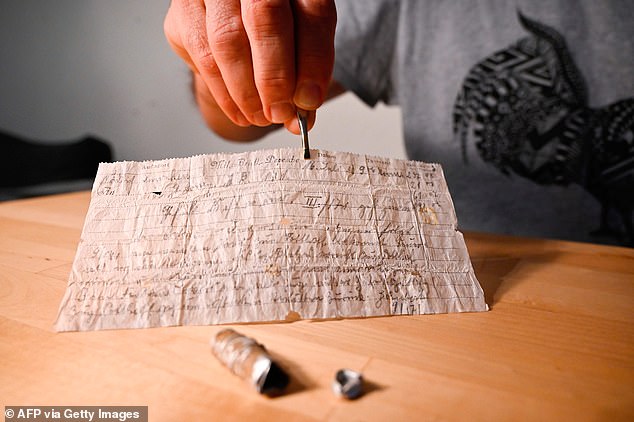 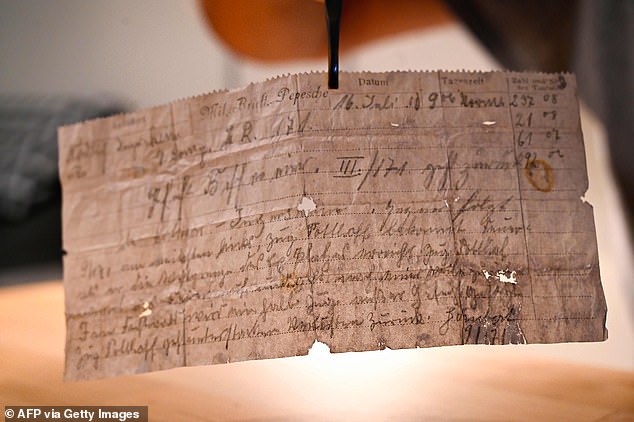 Dominic Jardy, curator of the Linge Memorial Museum, where the message was brought, called the find ‘exceptional’ and ‘super rare’

The infantry soldier was based in an area next to Ingersheim, which had been part of Germany at the time, and in a barely legible hand had detailed military manoeuvres in the area.

The couple brought their find to the nearby Linge Memorial Museum in Orbey – dedicated to one of the bloodiest battles of World War I.

Museum curator Dominique Jardy was ecstatic with the ‘exceptional’ discovery of the ‘super rare’ letter, which he said was addressed to a superior officer.

‘When this object was described to me, I was excited like a madman. It is my first time seeing something like this in 40 years [of working],’ Jardy told the French DNA news website.

He enlisted the help of a German friend to decrypt the message, the scrawling script of which was difficult to read.

According to France 3 regions, the message was written on tracing paper by a soldier named Gänsbert of the the 171th Colmar infantry regiment. 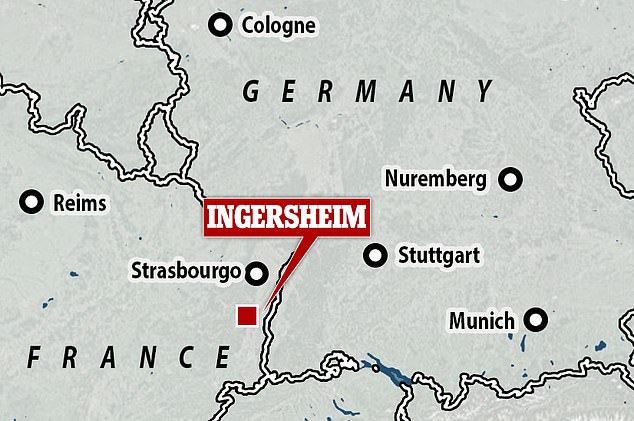 The discovery was made by a pair of hikers in a field in Ingersheim, France, this September. At the time the message was written, Ingersheim was part of Germany and soldiers were based nearby during the First World War 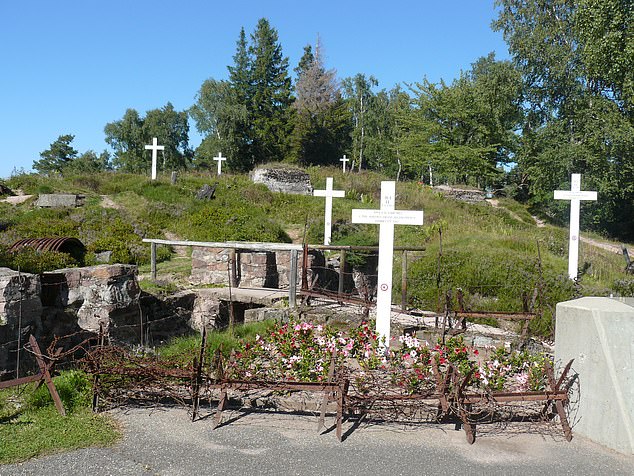 The message will join the permanent display of the Linge Memorial Museum in Orbey, France [File photo]

‘Platoon Potthof receives fire as they reach the western border of the parade ground, platoon Potthof takes up fire and retreats after a while,’ the message reads, AFP news agency reported the message as reading.

‘In Fechtwald half a platoon was disabled. Platoon Potthof retreats with heavy losses.’

Jardy said the ‘heavy losses’ mentioned would have been estimates rather than actual deaths, as is common during military exercises.

The difficulty reading the message means the exact date is uncertain. It reads July 16 but the year could be either 1910 or 1916, however Jardy is confident the note is from 1910 as he does not known of any military manoeuvres in the area in 1916.

Ingersheim was returned to France in with the 1918 Allied victory. The area had been ceded to Germany in 1871 after the Franco-German war.

The message and the capsule it was found in will now join the museum’s permanent display. According to Jardy, it will be shown next to a mannequin wearing the uniform of the infantry the message’s author belonged to.

Carrier pigeons played an important role in communications during the First World War and were used by all sides to deliver important messages.

Normally, these notes would be put inside a metal capsule and attached to the pigeon’s leg before the bird was released.

According to a soldier’s account published by the Imperial War Museum in London, the birds could carry messages at speeds of 40 miles per hour. 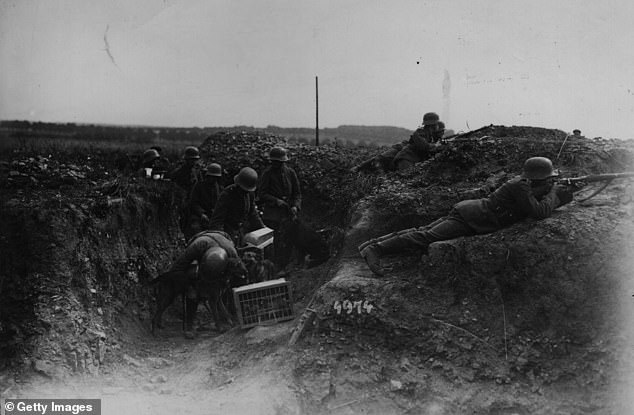 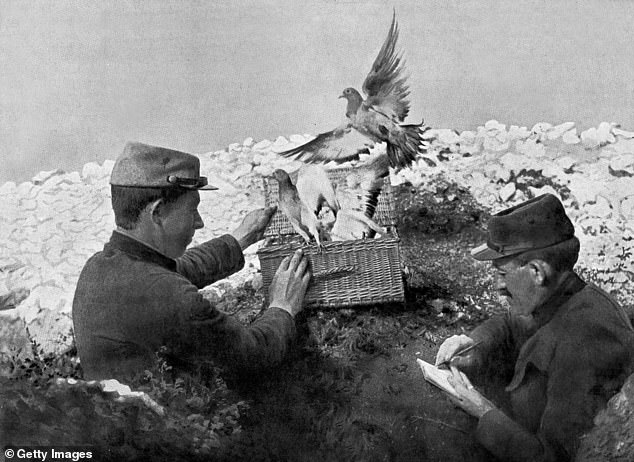 Carrier pigeons were used by all sides to send messages. A rolled-up note would be placed inside a metal capsule and attached to the bird’s leg before it was released. Pictured: Soldiers in the First World War releasing carrier pigeons [File photo] 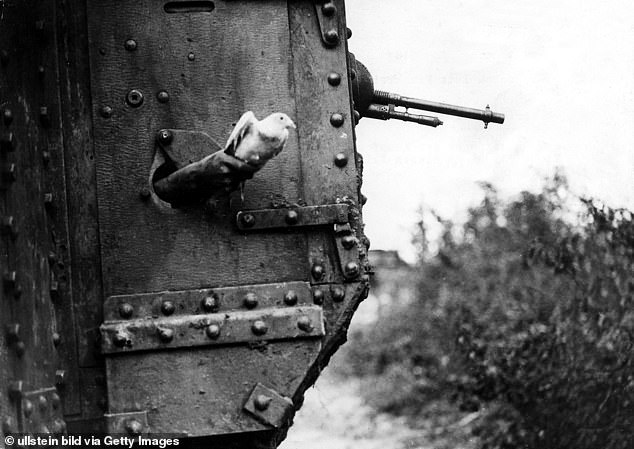 A carrier pigeon is sent out from inside a British tank in 1918. Tank corps often used pigeons to relay information during an advance