Get used to a ‘Sunday-style timetable’ on the trains ‘until further notice’: Passengers face ‘short notice cancellations’ and rail replacement buses as operators slash services due to 11% of staff off sick and commuters still WFH

Rail companies across Britain today warned passengers that they face reduced services ‘until further notice’ amid rail replacement buses, halved service frequencies and a ‘Sunday-style timetable’ on some routes.

Train firms have slashed hundreds of services due to thousands of Covid-related staff absences, with bosses warning passengers to expect last-minute cancellations and more crowded trains due to fewer in operation.

Some operators have brought in new reduced timetables from today including Greater Anglia, Southeastern and TransPennine Express while London Overground is now operating some of its services at half the normal levels.

Southern Rail has finally reintroduced trains to and from London Victoria after the post-Christmas closure was extended by a week, although not all services are back and those that are remain on an amended timetable.

Staff absence for all reasons is now at 11 per cent across all operators, according to the latest Rail Delivery Group data in the week to January 5 – a sharp rise from 8.9 per cent up to December 29 and 8.7 per cent to December 22.

The ever-rising figure is also significantly up on 7.6 per cent in November 2021 and 4.5 per cent at the end of August 2020, during the period when Covid-19 rates in the UK were at their lowest during the pandemic.

Train companies said the amended timetables had been brought in because of high staff absence numbers but also lower demand since the Government’s working from home guidance was brought back in last month.

And they defended the revised timetables today, saying that since the post-New Year return to work last Tuesday, cancellations have been at an average of 2.4 per cent across all operators, below the annual average of 3 per cent.

Meanwhile congestion data from TomTom revealed that today was the busiest morning rush hour on London’s roads in a month. The level of 61 per cent between 8am to 9am this morning was the highest since December 14 last year when 68 per cent was recorded, one day after the Government’s working from home guidance returned.

It comes as Prime Minister Boris Johnson today hailed ‘great progress’ against Omicron and said the Government is ‘looking at’ cutting the self-isolation period again – but warned that the NHS is still under significant pressure.

There are mounting calls to reduce the mandatory quarantine period from seven days to five as fears mounted over the impact of more than a million people being forced into isolation. Ministers have already cut isolation times from ten days to seven for those who can provide negative tests on two consecutive days. But Downing Street has so far refused to follow the lead of France and the US in reducing the period to just five days.

Staff absence levels in schools were at about 8.5 per cent last week, and the Department for Education has modelled scenarios in which staff absences could reach 25 per cent this month. The NHS has also been hit hard, with military medics brought in to help London hospitals and troops on standby to drive ambulances. It comes as: 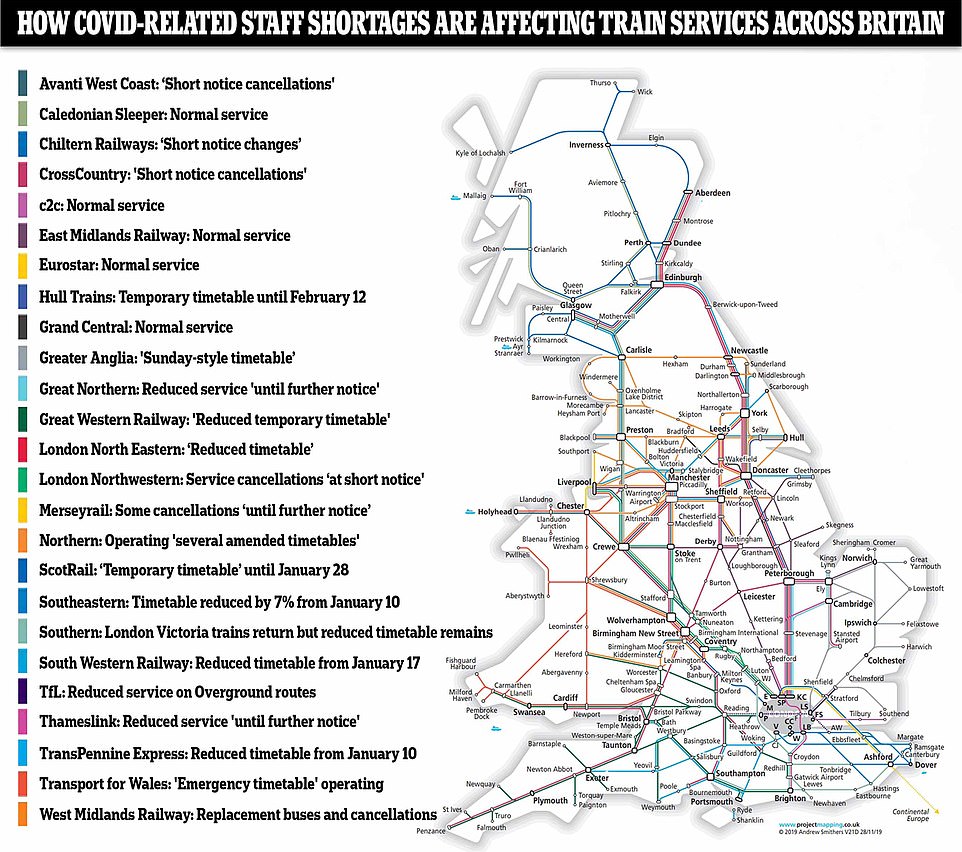 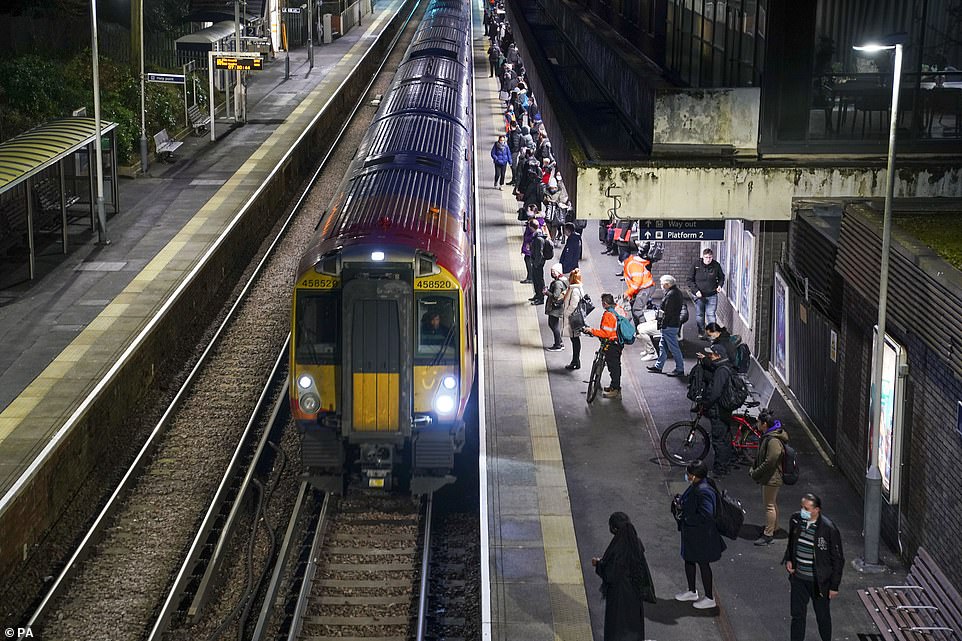 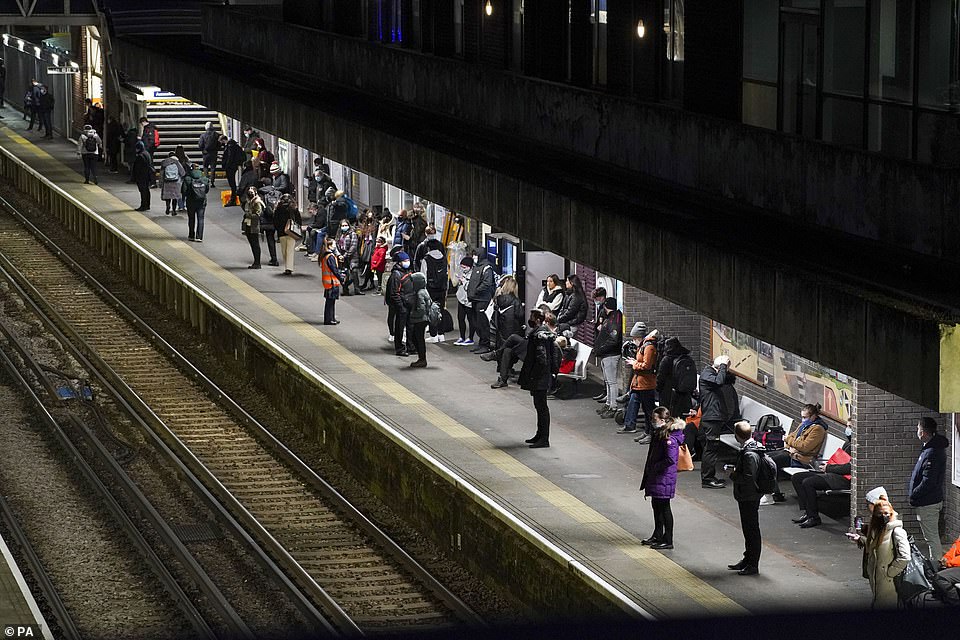 This Transport for London graph shows passenger data split by station type, dating back to the start of 2020

Southern Rail brought back its services at London Victoria, Battersea Park, Clapham Junction and Wandsworth Common today, although it said its reduced timetable would remain in place ‘until further notice’.

The services to and from Victoria were originally due to have restarted last week following engineering works, but they were then cancelled for a further week ‘due to the impact of Covid on staff’.

How Covid-related staff shortages are affecting train services across UK

The firm said that as more train staff return to work, ‘we are planning a larger service that will introduce more direct services to and from London Victoria’, adding that there were ‘far fewer people travelling due to Omicron and the work-from-home directive’.

In addition, the Gatwick Express remains completely suspended ‘until further notice’ because of the ‘ongoing effect of coronavirus isolation and sickness’.

‘Due to the continued significant challenges we face with Covid affecting many of our colleagues, there are fewer trains than normal. Although we have far fewer people travelling with us at the moment due to the work-from-home directive, passengers may have to change trains to reach their destination. We’re really sorry if this affects your journey.’

GTR also operates Thameslink and Great Northern trains – both of which have a reduced service on all routes ‘until further notice’ because of the ‘ongoing impact of coronavirus isolation and sickness’.

Meanwhile Transport for London said it had ‘planned some temporary changes to London Overground services but we are currently running more services on the two impacted lines than we had anticipated’.

A half-hourly service will now operate between Richmond and Stratford on weekdays – which will mean a reduction in frequency to six trains per hour in the core section between Willesden Junction and Stratford, down from ten per hour.

However, TfL said it would ‘will run more services on these routes if absence rates allow us to and we will continue to keep operating services as planned across our network’. Weekend and Night Overground services are not affected by the changes.

TfL added that across its workforce, it currently has around 500 members of non-office-based staff off work due to a Covid-related illness, but said the overall proportion of staff off work ‘remains low’. It said there ‘may be other staff who work in more office-based roles who are self-isolating but are still working from home’.

There has not yet been any major impact on London Underground services apart from the Waterloo and City line which returned at weekday peak times today.

Rory O’Neill, TfL’s general manager for London Overground, said: ‘Like many businesses and organisations around the country, we are experiencing the effects of the pandemic with a number of staff off ill due to Covid or self-isolating.

‘To ensure we can provide a reliable service, it has been necessary to make some timetable changes to London Overground services from Dalston Junction to New Cross and Richmond to Stratford.

‘Customers continue to have a range of travel options. We will continue to do all we can to keep operating a near to normal service but advise everyone to check our website and the TfL Go app before they travel as further services may be affected at short notice by staff absences.’

Greater Anglia, which runs trains across Essex, Suffolk, Norfolk, Hertfordshire and Cambridgeshire brought in a new amended service from Saturday, saying it was ‘making further temporary changes to our timetable to reflect the current situation with the pandemic’.

The operator said a ‘Sunday-style timetable with earlier first trains and more trains at peak times will run on weekdays’ from today, and that an hourly service would continue to run on all regional routes, except Ipswich to Peterborough which will remain two-hourly as normal.

The Norwich to London Liverpool Street intercity service will become hourly, and Greater Anglia said it was ‘making these changes in response to a drop in passenger numbers, due to Government advice to work from home and a general increase in coronavirus cases across the region’. 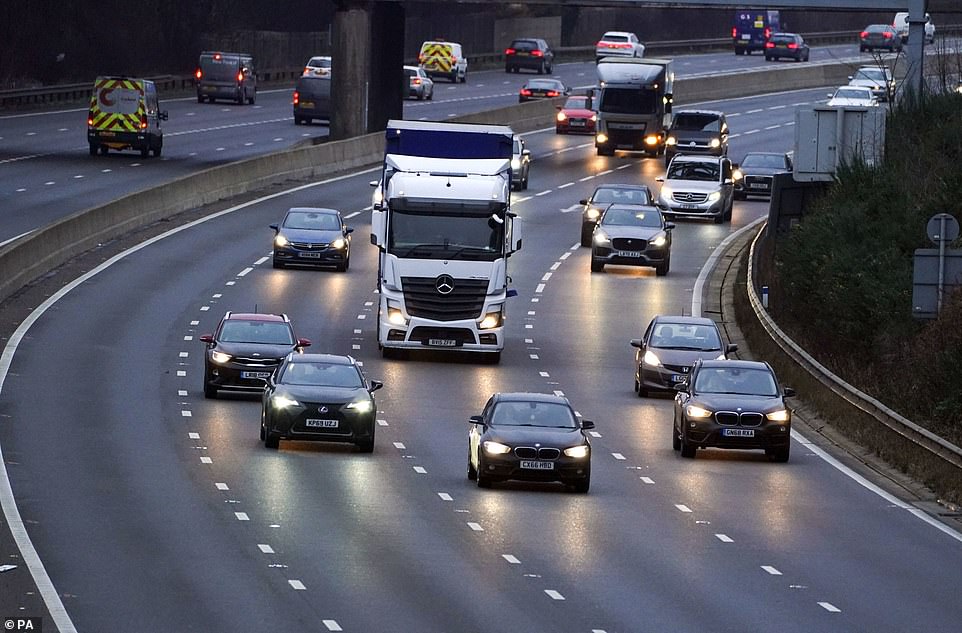 Congestion data from TomTom revealed that today was the busiest morning rush hour on London’s roads in a month. The level of 61 per cent between 8am to 9am this morning was the highest since December 14 last year when 68 per cent was recorded 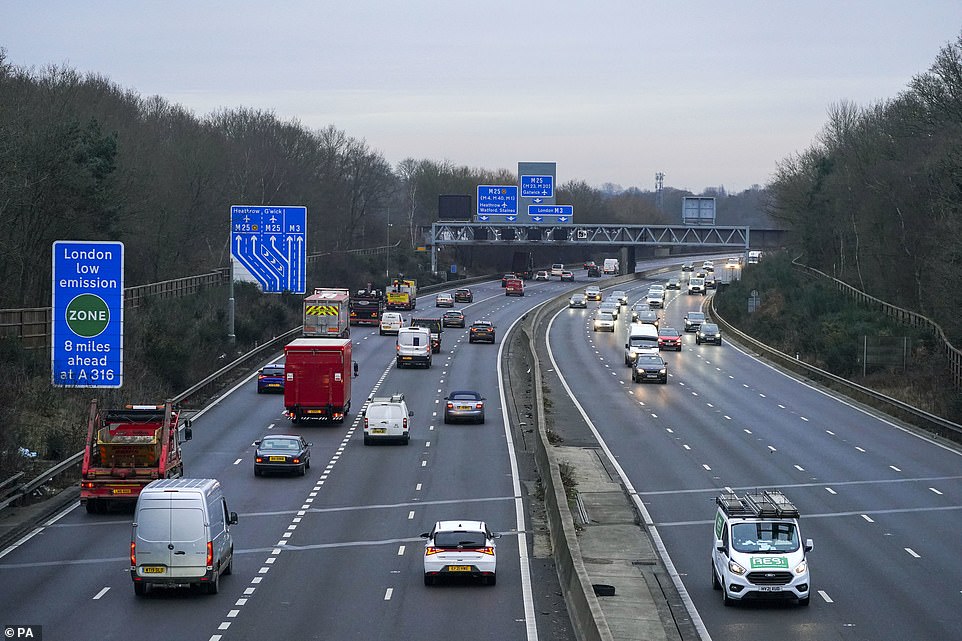 The operator told passengers it would ‘continue to monitor passenger numbers and will let you know if we make any further changes to the timetable’.

Southeastern, which operates across Kent and South East London, said it was reducing its timetable by 7 per cent from today after passenger numbers had ‘reduced significantly in response to the latest advice’ and amid an ‘increasing number of colleagues affected by Covid’.

There will also be a reduced service from Slade Green via Woolwich and Greenwich to London Cannon Street; and some trains between Gravesend and Dartford via Sidcup to and from London Charing Cross will not run. 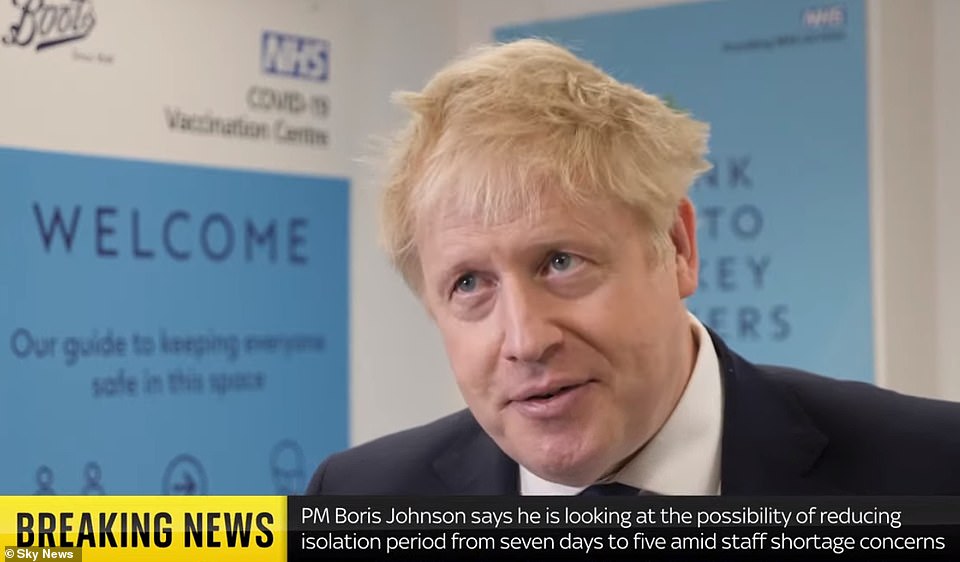 Boris Johnson said in Uxbridge, West London, today that the Government is ‘looking at’ cutting the self-isolation period again 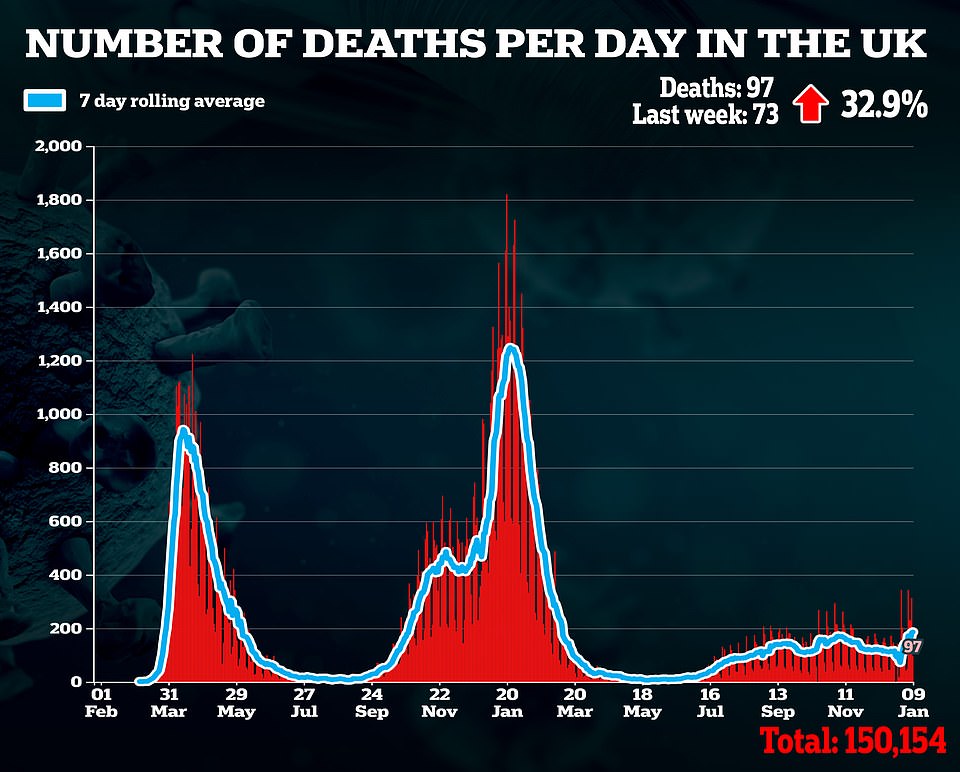 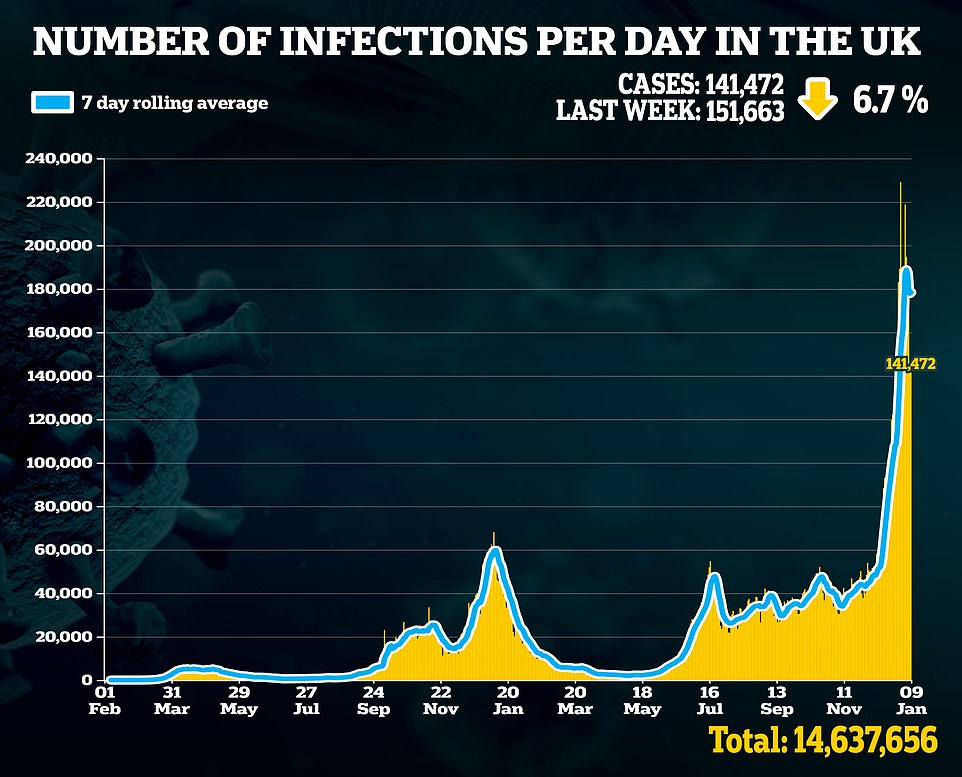 TransPennine Express has also brought in a revised timetable from today which it said will ‘provide a stable and reliable service for those customers who are travelling’.

London commuters heading into the City face a difficult journey into work for the next four months when the Northern line’s Bank branch closes.

The route between Kennington and Moorgate will shut from this Saturday until mid-May 2022, which is due to upgrade works at Bank to increase the station’s capacity and provide step-free access to the Northern line.

Engineers wil be connecting new tunnels to the existing railway and integrating new systems in the station.

Transport for London said many lines and stations across central London will be busier, especially around the City, but extra Tube services and a new bus route will operate.

The new bus, the 733 from Oval into the City (Finsbury Square), will also be introduced on weekdays and run every seven to eight minutes.

Waterloo, Embankment, Tottenham Court Road and London Bridge are expected to be among the busiest stations during the closure,

Andy Lord, Managing Director of London Underground, said: ‘The Bank Station Capacity Upgrade is a crucial project that will support the City’s growth and success after these challenging years of navigating the pandemic.

‘I’m sorry for the disruption this vital work will cause, and I can assure Londoners that if there was any other way to connect the new tunnels with the existing railway then we would.’

Meanwhile the last service of the day between Sheffield and Cleethorpes will now operate as a rail replacement bus service.

Other operators warning of disruption included Avanti West Coast, which said it is ‘doing everything we can to run our full timetable but there may be some short notice cancellations’, while Chiltern Railways warned it ‘may have to make some short notice changes to our timetable’ because of the ‘impact of Covid-19 on our train crews’.

CrossCountry said there would be ‘short notice alterations and cancellations’ because of ‘increasing levels of absence amongst train crew due to Covid-19 isolation periods’.

And Great Western Railway has had a ‘reduced temporary timetable’ in operation since Saturday because of ‘higher than usual levels of staff being absent or self-isolating due to Covid’.

Hull Trains has a temporary timetable operating until at least February 12 to ‘minimise disruption’, while LNER will be running a ‘reduced timetable’ between London King’s Cross and Leeds and Lincoln until a similar date.

London Northwestern Railway said ‘some trains may be cancelled at short notice’ and there will be a rail replacement bus service on the Abbey Line and Marston Vale Line ‘until further notice’.

Merseyrail told passengers that some trains will be cancelled ‘until further notice’ because of the ‘impact of the Omicron COVID-19 variant affecting staff availability’, while ScotRail said it was ‘being forced to bring in a temporary timetable’ until January 28 ‘as we continue to see colleagues off sick because of Covid-19’.

South Western Railway will be bringing in a new reduced timetable from January 17 due to a ‘shortage of staff across our business’ causing ‘short term cancellations’, and Transport for Wales still has an ’emergency timetable’ in place to ‘prepare for an expected rise in staff shortages due to the emergence of the Omicron variant’.

And West Midlands Railway warned that rail replacement buses on the Leamington Spa-Nuneaton via Coventry line would be running ‘until further notice’ due to the ‘impact of Covid-19 on our workforce’, adding that some services on the Birmingham New Street to Shrewsbury line are ‘likely to be cancelled’.