Girl, 12, is gang-raped and beaten to death with rocks by two men Girl, 12, is gang-raped and beaten to death with rocks by two men during visit to Indian temple with her 16-year-old aunt

A 12-year-old girl was raped and murdered by two men while she was visiting a temple with her teenage aunt.

The police suspect that her 16-year-old aunt, who was looking after her when the crime was committed, on Tuesday in Bhopal, India, knew the suspects and was also involved in the crime.

The incident took place when the girl was visiting a temple in Madhya Pradesh’s capital Bhopal with her aunt, and the two men approached her, according to NDTV.com

The men took the girl to a secluded place and raped her, before smashing her head with stones and leaving her dead at the scene, officials said. 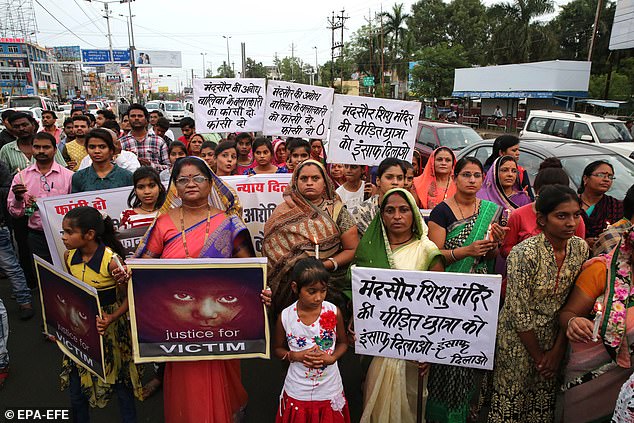 The rape and murder of a 12-year-old girl in the central state of Madhya Pradesh has added another victim to the already high number of rapes in the region. Protesters have been taken the streets to condemn these awful crimes

Her aunt was not around when she was taken, leading the police to suspect she might be involved in the crime too.

On Wednesday, her family filed a complaint with the police for the disappearance of the girl. Shortly after both men, who lived in the same neighbourhood as the girl, were arrested along with her aunt.

State opposition leader, Kamal Nath, has tweeted: ‘MP is infamous state in the country for recording the largest number of rapes in the country already. When such incidents would stop? When our sisters-daughters are going to get a secure environ (sic)?’

Last March two brothers were arrested in India for allegedly raping their 12-year-old sister who was later beheaded with a sickle, police say. The girl’s uncle, 40, was also arrested while police were searching for the eldest brother after her body was also found in Madhya Pradesh.