A GOVERNMENT scientists has admitted he "cannot see the logic" behind the decision to plunge millions into new Tier 4 restrictions.

Boris Johnson announced the tougher new tier on Saturday amid concerns over a new mutant strain of Covid spreading rapidly in the South East. 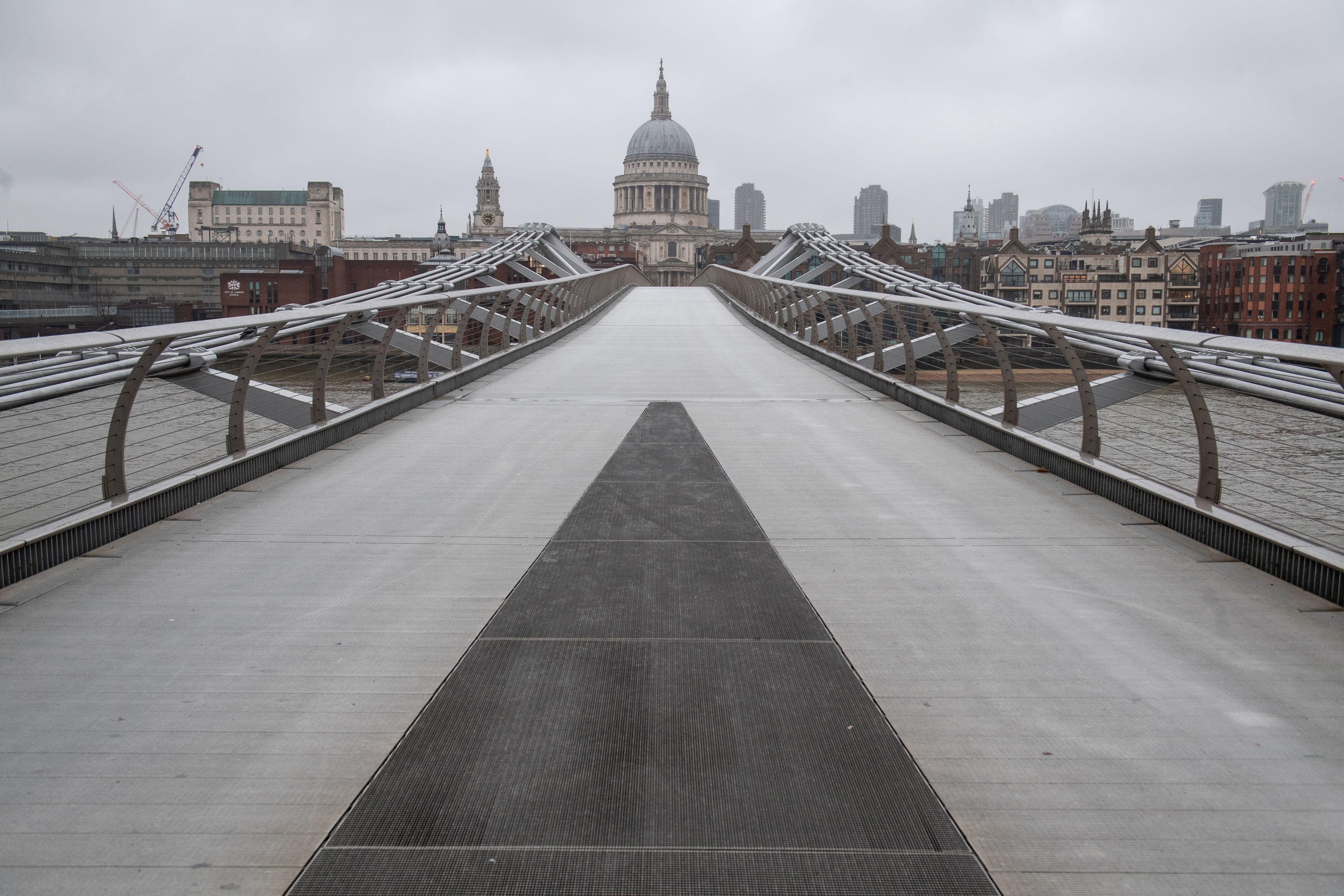 But Professor Robert Dingwall, who sits on the New and Emerging Respiratory Virus Threats Advisory Group (Nervtag), said evidence suggests it's already "all over the UK anyway".

Speaking on LBC radio today, the scientist said London and the South East are hotspots – but he was surprised by the sudden Downing Street announcement to introduce tougher restrictions from midnight.

Nervtag had discussed the threat of the new strain only the day before and made “no particular recommendations about control measures," he said.

Yet "the existence of a potential problem was transformed over the course of 24 hours into a national panic".

Asked whether he thought Tier 4 was necessary, he said: "I find it very hard to see the logic of it, let me put it that way.

"If you recognise a significant number of cases were being found all over the country a week, ten days ago. The genie is out of the bottle.

"The only reason many European countries haven't recognised the presence of this variant is that they haven't looked for it.

"My strong suspicion is that there are cases elsewhere but we do a lot more screening of the genetic drift in the virus." 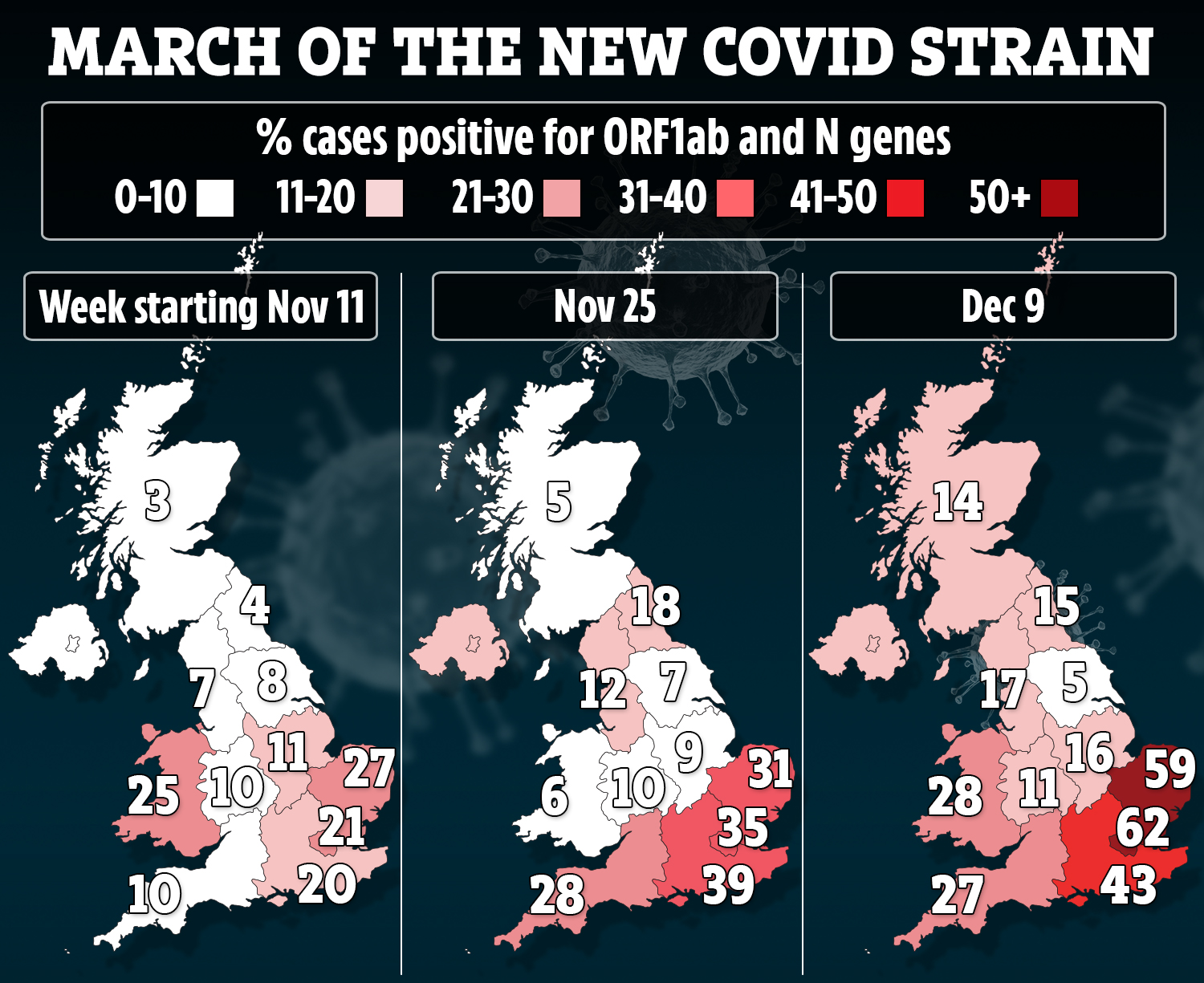 What proportion of cases are caused by the new strain?

In the week to December 9, the percentage of cases caused by the new strain are as follows:

East of England: 59 per cent

Yorkshire and the Humber: 5 per cent

By country in the UK:

His comments come after other leading academics have urged the Prime Minister to publish clear evidence on the mutant strain, known as VUI-202012/01.

Mr Johnson warned the mutation could be 70 per cent more contagious than the original version and is "spreading rapidly" and that the new strain could increase the R rate by 0.4 or more.

The new variant was first detected in Kent on September 20 and by December 9, 62 per cent of all cases in London were attributable to it.

Professor Carl Heneghan, from the University of Oxford, expressed scepticism over the 70 per cent figure "in such a short time frame".

Prof Heneghan added: "Every expert is saying it's too early to draw such an inference.

"I would want to have very clear evidence rather than 'we think it's more transmissible' so we can see if it is or not.

"It has massive implications, it's causing fear and panic, but we should not be in this situation when the Government is putting out data that is unquantifiable."

Prof Heneghan added that there was no doubt that this time of the year is the "height of the viral season" and always difficult for the NHS.

However, he warned that without basis to the figures, there was a risk of undermining public trust.

Professor Hugh Pennington, a leading microbiologist at the University of Aberdeen, also weighed in on the claims the new variant is more transmissible. 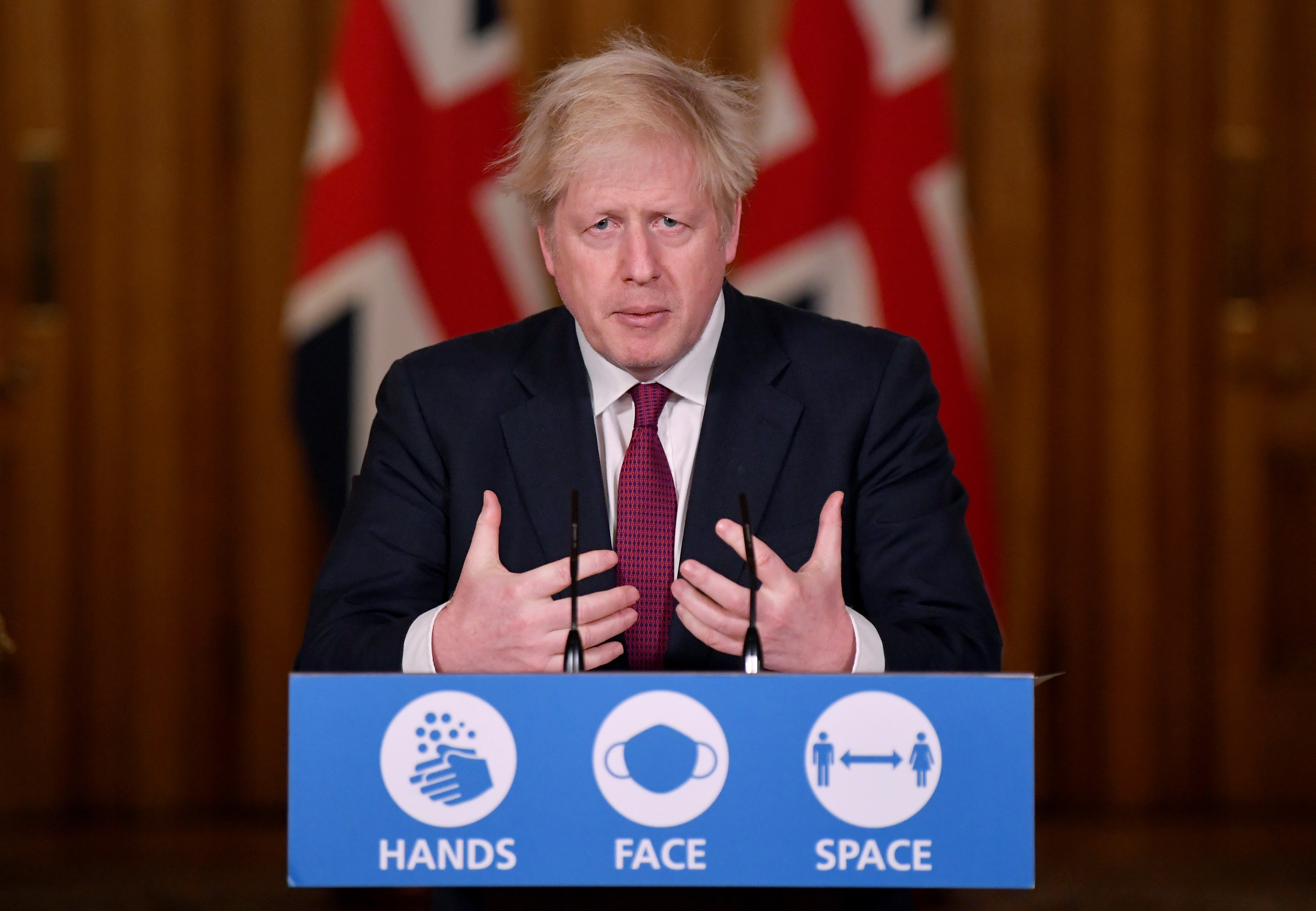 He said: “It would be highly unusual for a virus to become transmissible – it would be a scientific first.

"The big issue with the variant is that it’s no nastier than the first one that came in March.

“It doesn’t kill people more readily or make them any more unwell but it’s said to be more transmissible.

“However, that’s what we’re being told. We have not seen any evidence to back that claim up.

“We haven’t seen any data that shows the increase in England is down to the new variant rather than people just not behaving themselves.

“If this virus has mutated to become more transmissible that would be a scientific novelty.

“It could be a coincidence, with it getting commoner as the infection rate goes up.”

What is the new Covid strain?

The public were first alerted to the new strain of the virus on December 14, when the Health Secretary Matt Hancock said it may be fuelling the surge in cases in the South.

The new strain has been named VUI – 202012/01 – the first variant under investigation in December.

It was first identified in September, according to scientists at COVID-19 Genomics UK Consortium (COG-UK), who have been working with Public Health England (PHE).

The first case was found in Kent on September 20, followed by London the next day, according to a report on behalf of COG-UK.

The South East is currently fighting an uphill battle with the disease, and has some the highest Covid cases in the UK, forcing ministers to put it under Tier 4 restrictions.

Speaking at a No10 briefing on December 19, the Prime Minister said the new strain is up to "70 per cent more transmissible" than the original version of the disease".

He stressed it is early data but told the public "it's the best we have at the moment", adding it could see the R rate increase by 0.4.

The R rate is how many people an infected person passes the disease on to, and is currently 1.1 to 1.2. It must be kept below 1 in order for the outbreak to shrink.

Government scientists at PHE's Porton Down lab are analysing the strain to assess how dangerous it is, but so far there is no sign it can cause more severe disease.

He said the only way to be sure, ahead of waiting on retrospective studies, would be to find out whether the variant is more transmissible by checking what the infected dose is of one person to make a comparison.

Prof Pennington added: “Is it more transmissible because you only have to breathe in a smaller dose of it? Or does somebody infected with it breathe out more virus?

“That’s what they need to find out.”

The only other way to find out if people were more susceptible to this variant was through a volunteer study where you’d “pump the virus” into a room full of people …“and that’s unethical”, he added.

“It’s very hard to prove whether something is more transmissible or less. I’m not saying it’s not possible… but I would like to see more evidence.”

Professor Tim Spector, who leads the ZOE Covid Symptom Study app, has also suggested there's not enough proof that the mutant strain is responsible for a surge in cases in the South East.

He tweeted: "Rates still increasing fast in Wales with R 1.3 which now exceed the North of England levels in October.

"London also increasing rapidly but hard to see how this is explained (or proven) to be due to new mutant Southern strain of Covid-19."

Dr Julian Tang, a clinical virologist at the University of Leicester, has suggested some theories as to why the new virus mutation is spreading.

“This is quite normal for viruses – like influenza – where different viruses may infect the same person, leading to a hybrid virus emerging. This is just one of the ways that natural viral variation arises.

“We are not seeing any increased virulence or any gross changes in the spike protein that will reduce vaccine effectiveness – so far.

“New viruses will adapt to a new host over time – with decreasing mortality, and possibly increasing transmissibility.

What is a virus mutation?

A mutation is a change in the virus’s genome, the set of genetic instructions that have all the information the virus needs to function.

When the virus makes contact with a host and starts to replicate, this set of instructions is copied, but mistakes can happen during this process.

Like all infectious agents Covid-19 mutates as it circulates within the human population, but this is often without any real consequence on the virus.

These mutations can often be linked to the shape of the spike protein of the virus.

The Covid-19 Genomics UK (Cog-UK) Consortium tracks new genetic variants as they spread and investigate if these changes lead to detectable changes in the behaviour of the virus or the severity of Covid-19 infections.

Most mutations that arise and spread have no detectable effect on the biology of the virus.

But a few have the potential to change both the biological behaviour of the virus and persist if they confer an advantage to the virus.

“It makes no sense for the virus to kill its host – rather better for it to replicate to high levels in the host, causing few symptoms – so that the host can stay mobile and appear well (asymptomatic) – to allow it to mingle further with those who are still susceptible – and spread its genes further.

“We are now likely seeing some of this new host adaptation process in SARS-COV-2, but it remains to be seen whether mortality will be different with this variant than with the previous one.”

Devi Sridhar, a member of the Scottish government’s Covid-19 advisory group, said that raising the alarm over a new strain without wider peer review had stoked “unhelpful” rumours about an increased risk to children.

Linda Bauld, chair of public health at Edinburgh University, said that experts around the country had not been shown any data to support the claim from UK government scientists that the new strain was up to 70 per cent more virulent than existing strains.

Concerns about the rapid spread of the disease were underlined with the publication of the latest official figures showing there had been a further 35,928 lab-confirmed cases of coronavirus in the UK as of 9am on Sunday.

Meanwhile, the PM will hold crisis talks with senior ministers and officials after France banned hauliers carrying freight across the channel amid fears over the new coronavirus strain.

Countries around the world have banned flights from the UK as an emergency response to the emergence of the mutant coronavirus.

Ahead of a meeting of the Cobra committee chaired by the Prime Minister, Transport Secretary Grant Shapps said emergency measures were being put in place to cope with a backlog of lorries heading for the channel ports.

The markets tumbled in response to the escalating coronavirus crisis and the looming prospect of a No Deal Brexit at the end of the transition period on December 31.

More than £33billion was wiped off the FTSE 100 within minutes of opening, as the index dropped more than two per cent, although it later recovered to a fall of around 1.4 per cent. 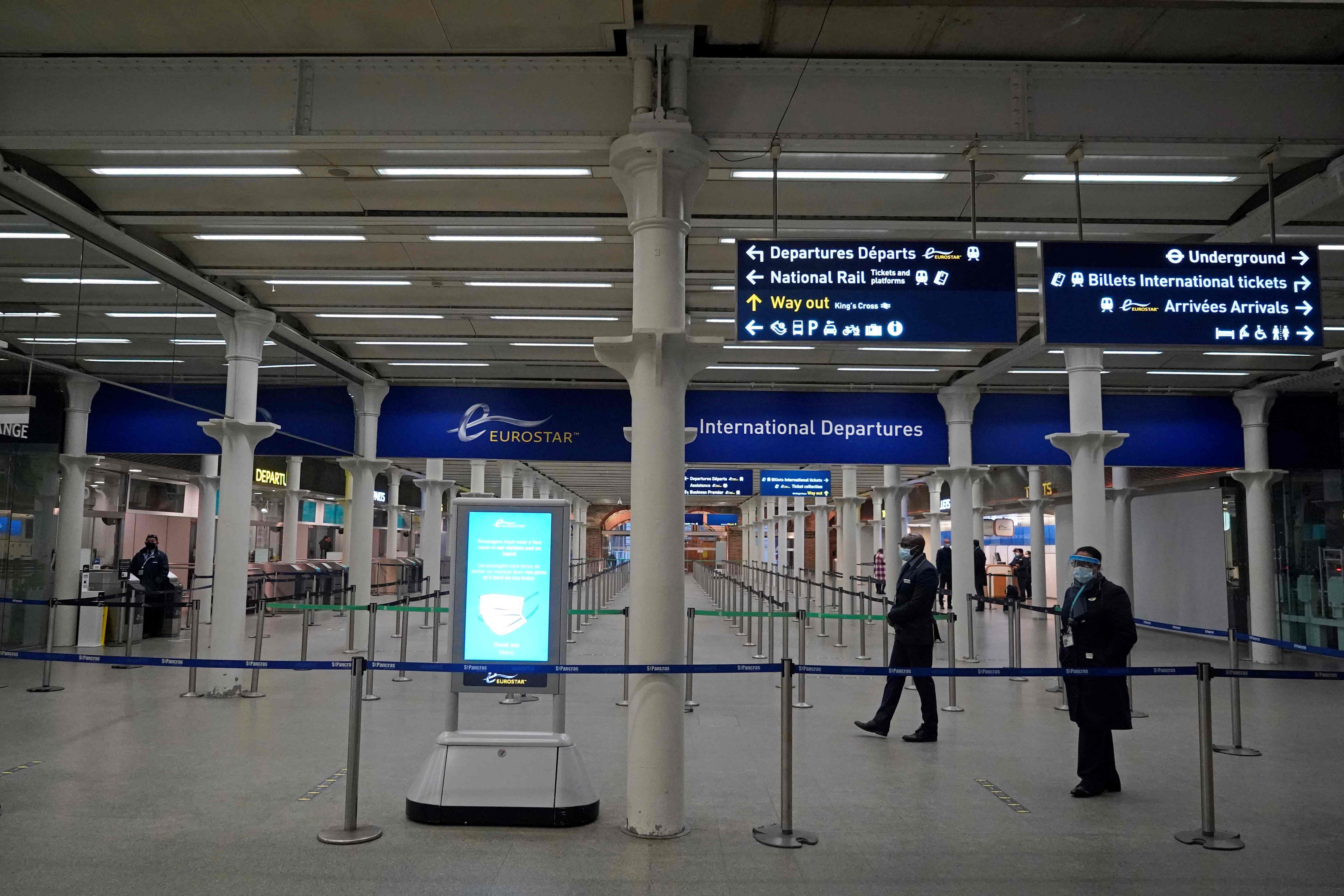 Along with France, countries across the world announced restrictions on UK travel following the disclosure that the highly infectious new strain is widespread across south-east England.

Italian authorities said the mutant strain had been detected in a traveller who recently returned to the country from the UK.

French health minister Olivier Veran said it was already "entirely possible" the new variant was already circulating there, although tests had not detected it.