A grandmother has got the go-ahead to build a £450,000 ‘Teletubby-style’ eco-home in her village after a bitter two year planning dispute with her neighbours.

June Titterton-Fox, 63, applied for permission to build the three-bedroom home, saying it would be one of the most energy-efficient properties in the UK.

Villagers said the ‘garish Hobbit house’ looked ‘more like something from Teletubby Land’ after the farmer and county-councillor announced her plans in 2020.

In February last year Rutland County Council planners refused her application for a single storey ‘Field House’ in the village of Whitwell, Lincolnshire.

They said the development was ‘unacceptable’ and would be ‘visually intrusive and impact adversely on the form and character of the area’.

Mrs Titterton-Fox appealed the decision to the Planning Inspectorate who overturned the planning decision on May 6.

Dominic Young, the Planning Inspectorate spokesman, said that the council’s reasons for refusal went against advice outlined in planning guidelines.

He ruled: ‘The state of the art property has been carefully and sensitively designed to the most exacting environmental standards.’

Mrs Titterton-Fox said she was ‘delighted’ the plans have finally been approved following the ‘horrible’ and ‘hostile’ row with her neighbours.

She added: ‘A couple have people have congratulated me but mostly it has been really hostile. I’ve had a lot of negativity on social media, it has been horrible.

‘We appealed once and because of the amount of local objection we pushed for a hearing with the Planning Inspectorate. 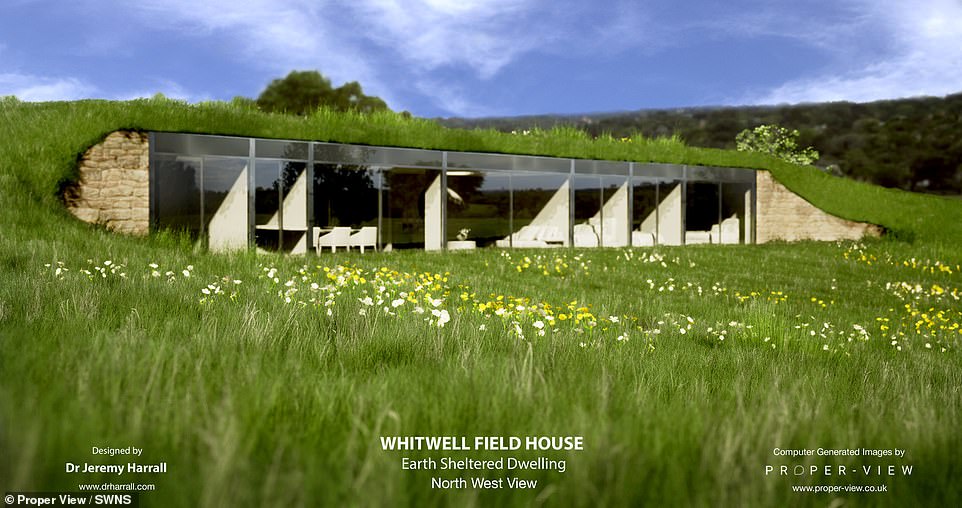 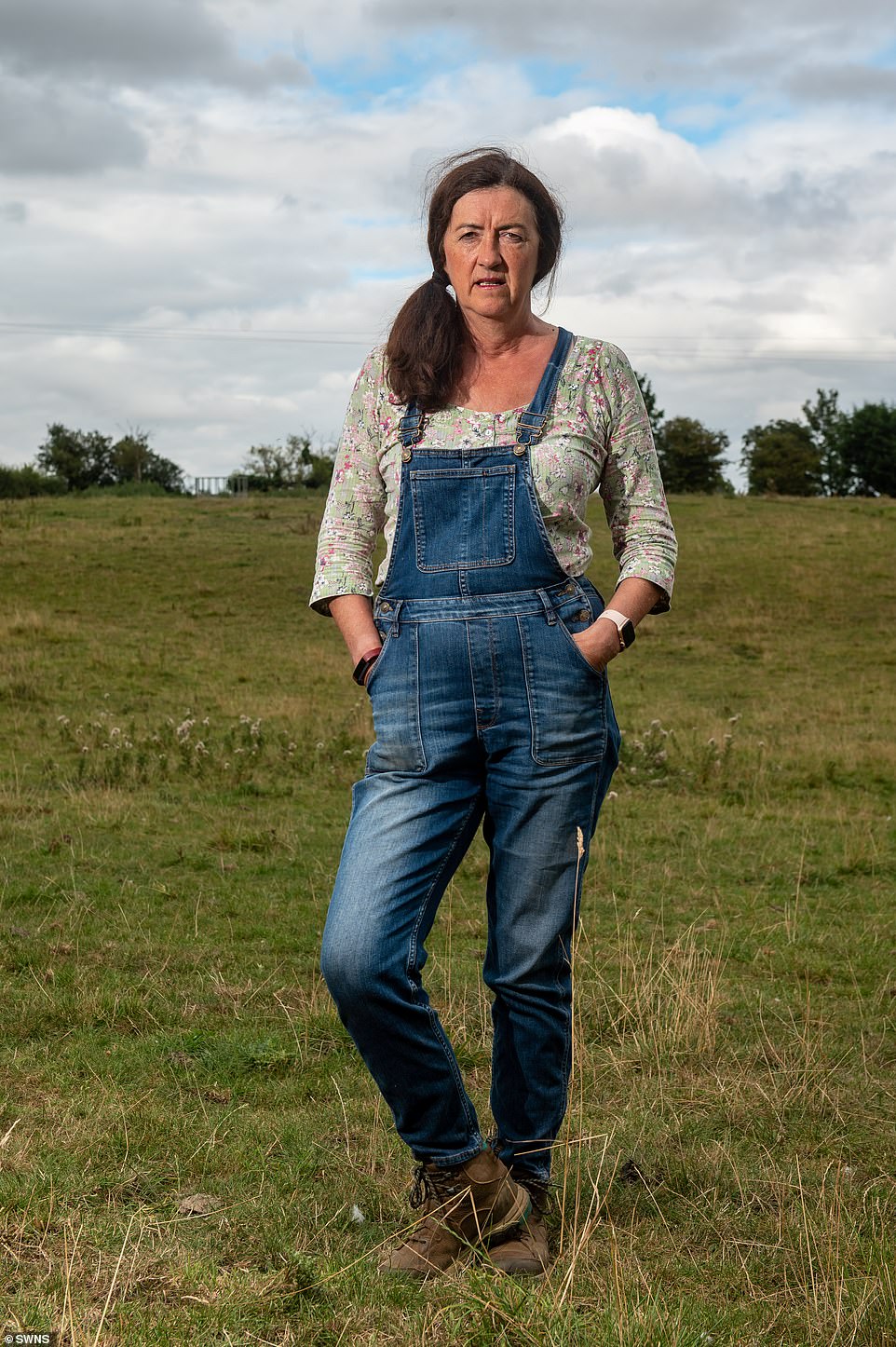 June Titterton-Fox, a farmer and county councillor, has battled breast cancer and had two heart operations and says this will be her final home as she has lived in the village for 20 years

‘You get more of an opportunity to put forward your case and that’s why it took so long. I’m really pleased we got it through.

‘It’s just been going on for so long, I just wanted closure.

‘Whatever the outcome, I just wanted to get on with my life.

‘Our house is far too big for us now so we would have to move. 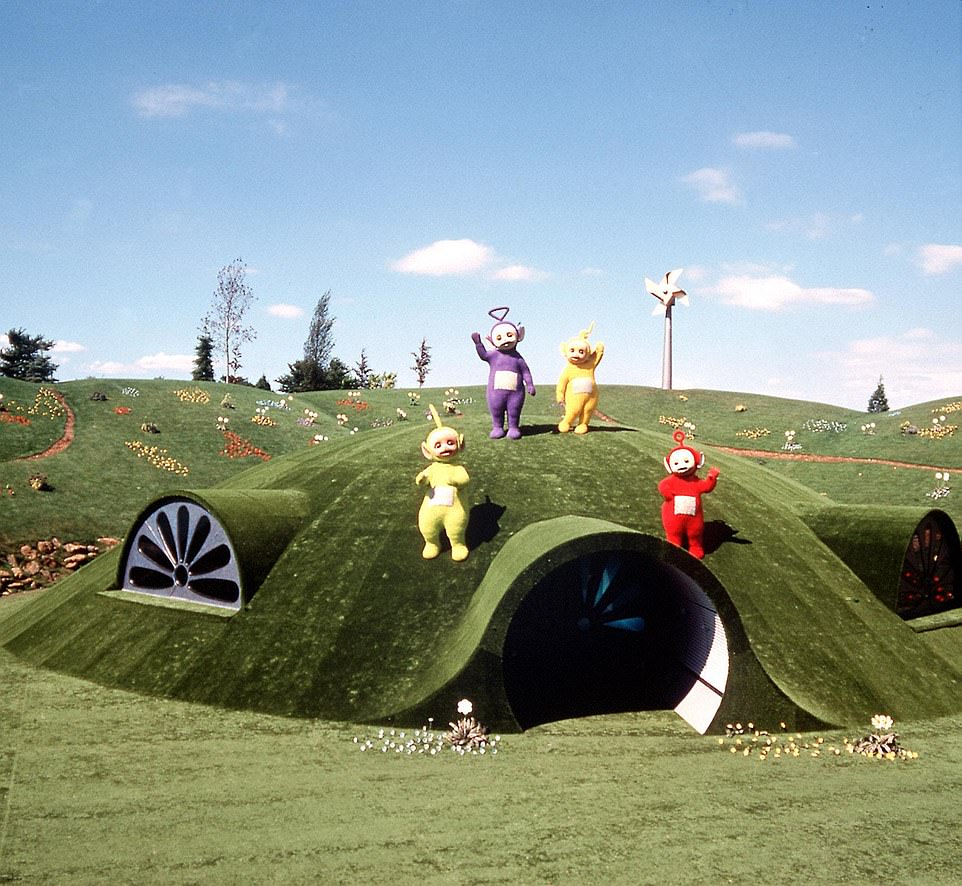 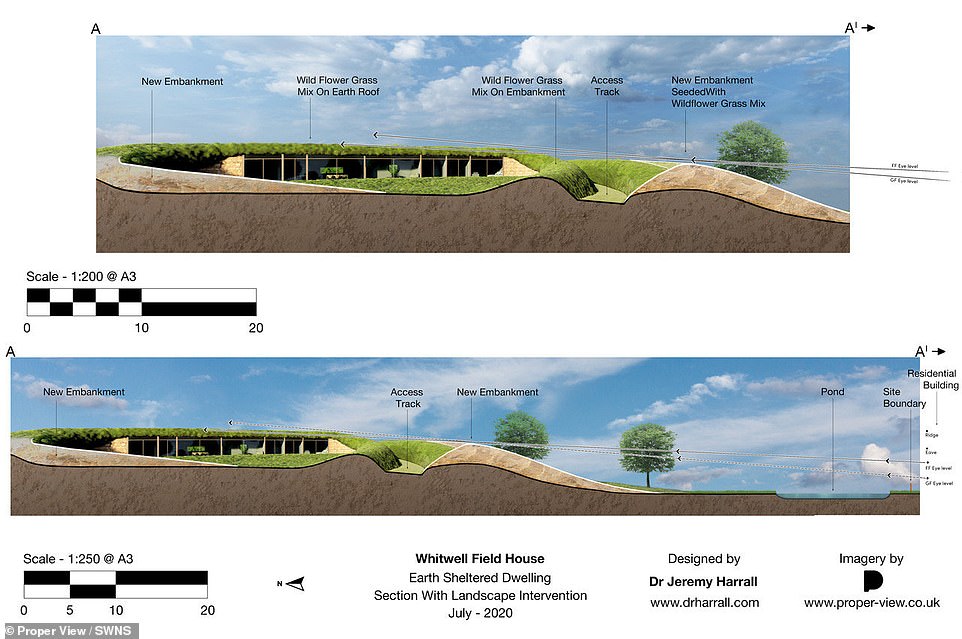 The plans which June Titterton-Fox has submitted for a modern farmhouse feature wild flowers, a pond and a grassy roof to blend into the landscape 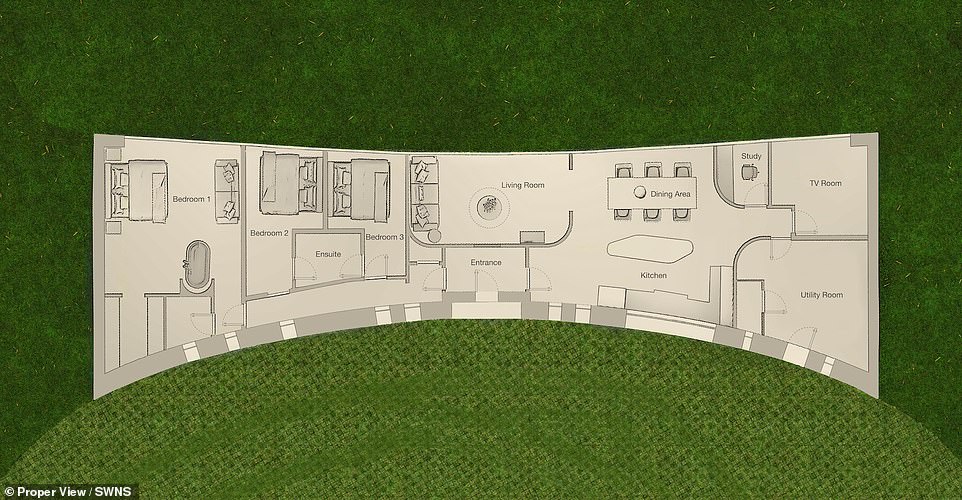 The floorplans shows how her three-bed single-storey property interior will look for her and husband Andy, 57 to enjoy together

‘We wanted to stay in Rutland and now we have planning permission we know that will now be possible.

‘I’ve been on crutches a few times the past couple of years so I wanted something all on one floor.

‘I thought it would be lovely to open the window and see my animals out in the field.

‘It’s now getting all the paperwork to start the build.

‘But it will be really lovely and hopefully we can start building by next spring, I suppose realistically it’ll be 12 months.

‘I just want to get on with the build, it’s all still very raw.

‘I just really want to settle down now.

‘My husband is really pleased about it too.

‘He put it to the back of his mind but is excited about it now.

‘It has taken a long time and we’re just glad we can get on with building our dream home now.’

Mrs Titterton-Fox wanted to downsize from the five-bedroomed house she currently lives in with husband Andy, 57, and to move into a house dug into one of her two fields.

She described her new design as a ’21st Century farmhouse’, but it would have its own water supply, all of its waste dealt with on site, and generate excess power to sell back to the grid.

Around a dozen residents objected to the planning application, claiming the new building would be a ‘blot on the landscape’. 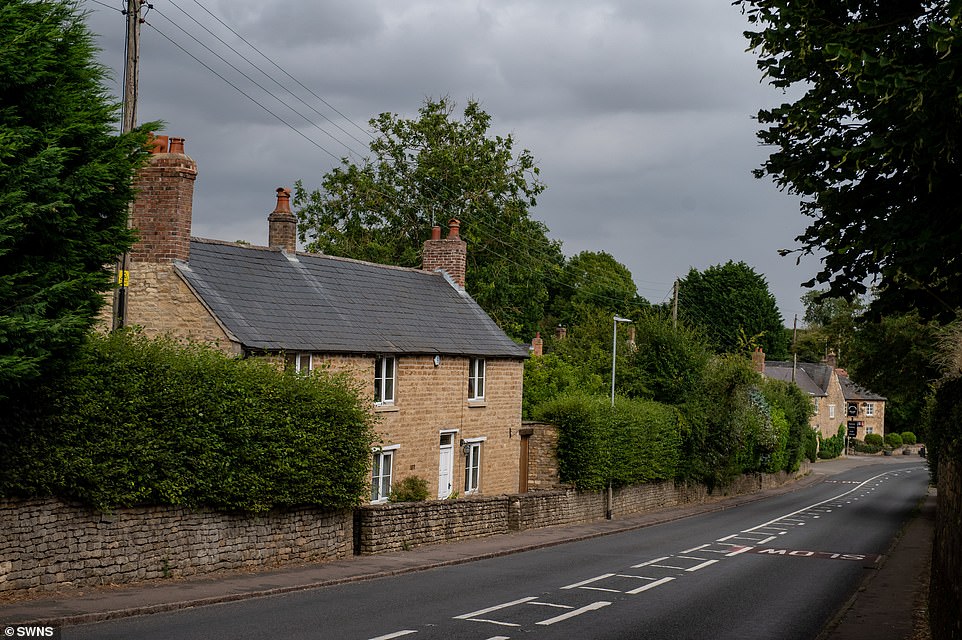 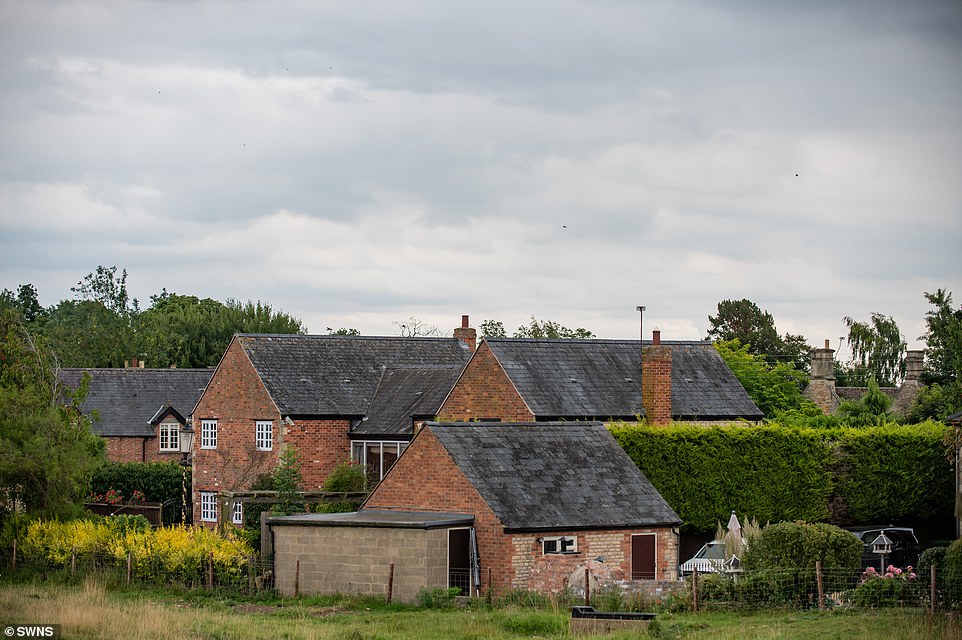 Around a dozen to fifteen protesters, who go by ‘Whitwell Residents’ have said the house will be ‘visually intrusive and impact adversely on the form and character of the area’

A protest group called ‘Whitwell Residents’, instructed solicitors to fight the case as they were concerned Mrs Titterton-Fox’s plans would set a precedent.

The group wrote: ‘The proposed building would be a real blot on the landscape, and would be in full view from the Grade II* listed church in the village.

‘It would sit on raised land, overlooking several of the heritage assets of the village.

‘More widely, we feel that, if this application succeeds in receiving planning permission, it could open the floodgates for similar projects gaining approval, thereby diminishing the rural assets of the county.’

The local church, St Michael and All Angels, dates back to Saxon times and has existed on the site since at least the Domesday Book of 1086.

One neighbour, who did not wish to be named, added: ‘It is not befitting of the village to have a Telletubby-style Hobbit home becoming an eyesore on the landscape.’

Mrs Titterton-Fox said she felt she was being ‘intimidated’ and felt upset people would try to interupt her plans in the village she has lived in and called home for 20 years.

The farmer, who has battled breast cancer and had two heart operations, said: ‘I don’t know why you’d object to something you can hardly see.

‘There’s been a concerted programme of intimidation through social media. It’s really sad.

‘It’s all a bit hurtful when all we want to do is build one house for us to live in.

‘The house puts back into the environment more than it takes out.

‘We shouldn’t have to move out of the village we’ve lived in for 20 years just because we want to downsize.’ 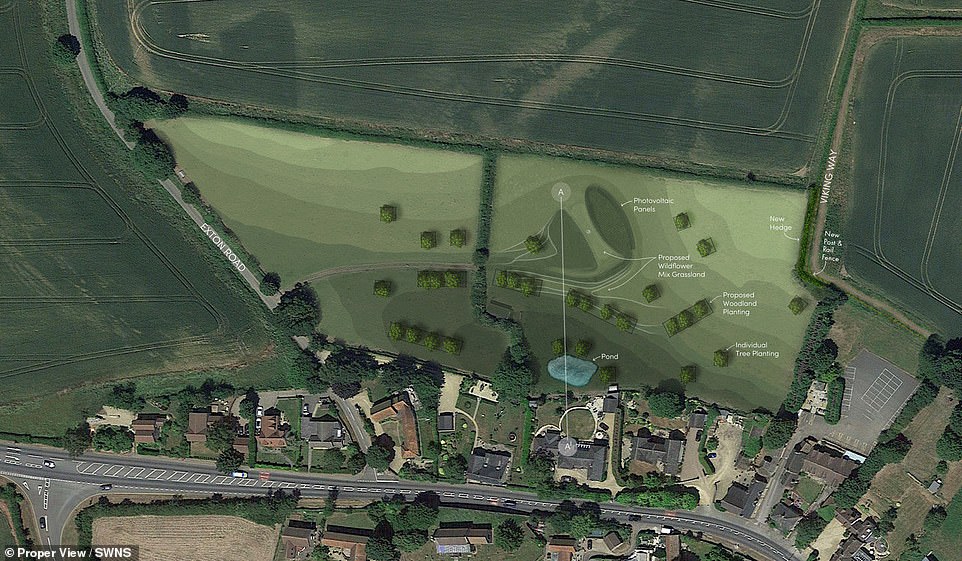 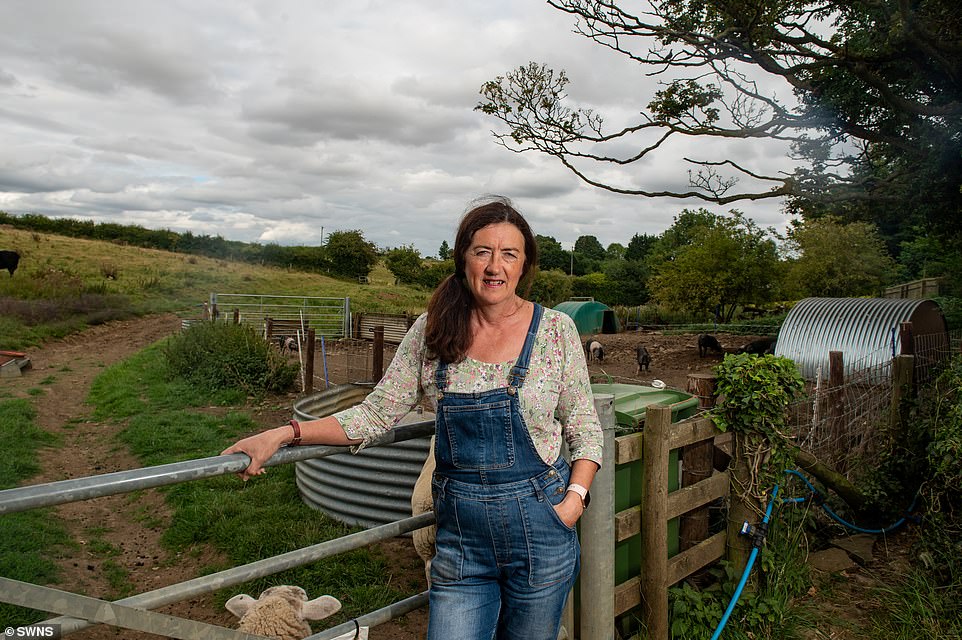 Mrs Titterton-Fox is a grandma, county councillor and farmer who runs ‘Junes Farm’ selling meat from her animals 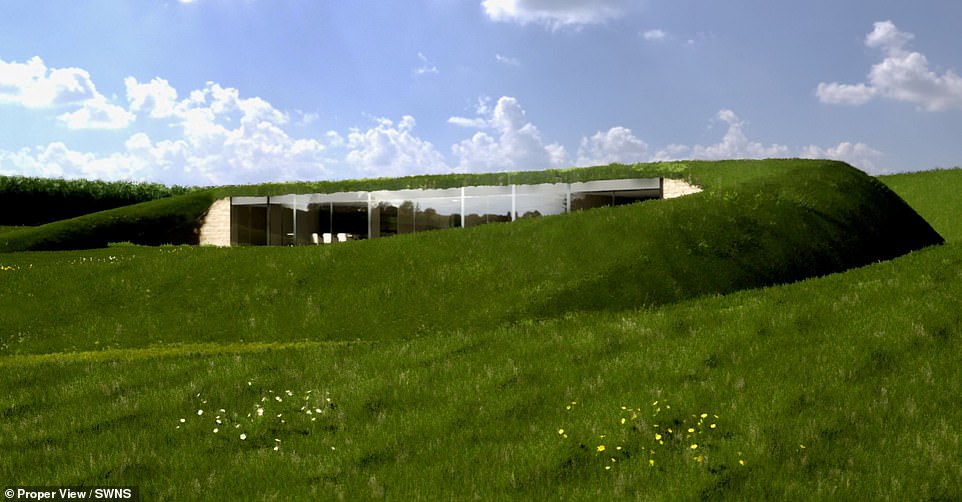 Mrs Titterton-Fox started her farming dream with just a few chickens after being inspired by 1970s sitcom The Good Life, where a suburban couple leave their jobs to live off the land and become self-sufficient.

She and her husband Andy then rented out two fields near their home in 2002 before they bought them in 2004.

They began with sheep and then reared rare-breed cattle and pigs.

They now sell surplus meat from ‘June’s Farm’ to make a living.

Mrs Titterton-Fox says living in ‘Field House’ would allow her to be closer to the animals and make it easier for her to look after them.