‘Grandmother’ research into giraffes reveals their higher level of intelligence

London: Giraffes are just as sociable as elephants, a new study claims, as elderly females stay with their tower long after they have stopped being fertile.

This post-menopausal period accounts for almost a third of their lives, researchers at the University of Bristol found, and the fact they stay with their familial group until death indicates giraffes have more complex social groups than previously thought. 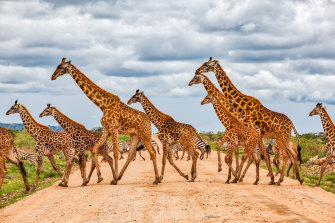 New research shows giraffes care for family members in a manner like the most complex animal social networks. Credit:Istock

The so-called “grandmother hypothesis” is a well-established theory which states that highly intelligent animals – such as whales, elephants and humans – have complex social lives and older family members help raise infants when they are no longer fertile themselves.

It is an anomaly in the animal kingdom, where an individual’s worth is based solely on their ability to reproduce and pass on their genes.

Elephants are the best-known example, with matriarchal groups headed by a sage female which is long past the point of being able to breed.

Almost a quarter of a female elephant’s lifespan is spent in a post-reproductive state and for killer whales this rises to 35 per cent. For humans it is about 40 per cent, assuming a woman goes through menopause at 50 and lives until she is 80. However, scientists have never before studied giraffes to see if they also fit into this exclusive group, with experts assuming they had a simplistic hierarchy and therefore were unlikely to have a prolonged post-reproductive lifespan.

Fresh analysis, published in the journal Mammal Review, proves this is not the case and that 30 per cent of a giraffe’s life occurs after the menopause.

Study author Dr Zoe Muller said: “I hope that this study draws a line in the sand, from which point forwards, giraffes will be regarded as intelligent, group-living mammals which have evolved highly successful and complex societies, which have facilitated their survival in tough, predator-filled ecosystems.

“If we view giraffes as a highly socially complex species, this also raises their ‘status’ towards being a more complex and intelligent mammal that is increasingly worthy of protection.”