Green spaces, roller-disco to go in plan for new homes on public estate

Residents of the Collingwood public housing estate are worried they will lose parks and community and cultural spaces to a new housing development planned for the land.

The Victorian government plans to build two apartment blocks over communal open space on the estate and take back an underground, resident-led cultural space to use for car parking. 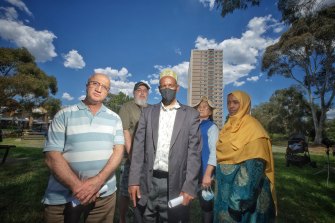 The development of 152 apartments is being fast-tracked under special rules that bypass the council permit process and waive the community’s right to formally object.

It includes one apartment block for “affordable housing” with rent costing up to 80 per cent of market rates and one block of “social housing”, which the government said includes public and community housing.

The blocks are to be built over an outdoor grassed area, a sports court, a car park, trees and picnic seating.

The development is part of the Andrews government’s “Big Build” program, which is promising the construction of 12,000 social and affordable homes by 2024, at a cost of $5.3 billion.

Minister for Housing Richard Wynne said the project would provide stable housing that would otherwise be out of reach for more than 300 people, and create hundreds of local jobs.

“There has been extensive consultation with the community, and the project’s development plans have been updated in response to feedback received through this process,” he said.

“The project will see new and revitalised community open spaces including an expanded communal garden, basketball courts, an enlarged futsal pitch, and a nature play area.”

Resident Fatuma Muhudin has six children and said she was concerned about having more buildings and more people living in a small area.

“We are large families living in our crowded houses, three bedrooms, and there is a lot of people living seven or eight in two bedrooms,” she said. “It is good to have space to build another house but not next to each other.”

She is also worried about the loss of parks and open space for children.

“We don’t have a space for the kids to have a playground,” she said. “The big kids don’t have any place to play.”

Cultural and community spaces are also slated for removal, with the state government planning to take back the Collingwood underground car park for car parking. It has been used for the past 20 years for events such as roller-discos, exhibitions, concerts and Victoria’s only black and queer-centred gym. 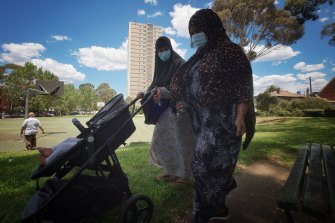 Residents of the public housing flats in Collingwood. Credit:Luis Ascui

Roller-disco founder and public housing resident Joshua Tavares said the underground car park was significant as the only resident-led “black space” on the estate.

“They want to take all this stuff from us now and also rob us of all the good community initiatives we have,” he said. “What future do they want for us, the people that live in the public housing?”

The City of Yarra has expressed concerns about the project, and councillor Gabrielle de Vietri said residents were desperately under-serviced in what are some of the most densely populated public flats in Victoria.

“We are very concerned that this proposal is being rushed through without the community being able to have their say,” Cr de Vietri said.

The City of Yarra has identified Collingwood as one of the area’s most open-space deprived suburbs, at only 0.3 per cent open space, compared with the municipal average of 13.5 per cent. The ratio in leafier suburbs is far higher, with Clifton Hill standing at 24.6 per cent and Fairfield-Alphington at 28 per cent.

The council wants the state government to consider using other land holdings it has in the area, including the north side of Alexandra Parade in Clifton Hill from the Provans Timber warehouse to Nicholson Street, and a large police warehouse on Wellington Street.

Ali Arpaci has lived in the public housing flats for 13 years and said the state government should look at other nearby sites to build the homes.

“Why does it have to be that just there?” he said. “There’s so much other land and they’re squeezing it there and getting rid of all the parks.”