GUY ADAMS probes how sea eagles are swooping into a storm

Sea eagles are Britain’s largest bird of prey once more after being reintroduced on the Isle of Wight – but feathers are flying in a battle between bird lovers and farmers. GUY ADAMS probes how they’re swooping into a storm

You never forget your first sea eagle. I saw mine a couple of summers back, as I bobbed around a windswept loch on the Isle of Lewis attempting to catch salmon.

Huge she was, and perfectly regal, with wings that spanned eight feet, and golden talons the size of a man’s hand.

As our boat passed the shore where she rested on a peaty hillock, we put down our fly rods and stopped for a long look.

Britain’s biggest and most majestic bird of prey has entranced people for millennia.

A few thousand years back, when they were common on coasts, estuaries and river systems, we believed they were the couriers of the gods.

Tribes in Orkney would lay their dead out on stretchers, until the great birds had picked the bones clean. Then the eagles would be killed and buried alongside the humans they’d just feasted on, supposedly to transport their bodies to the afterlife. 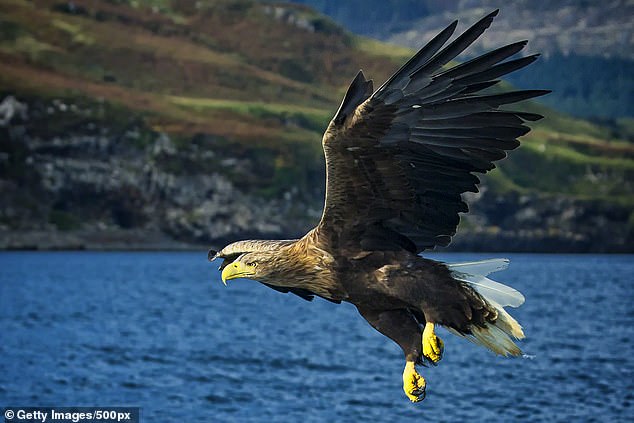 Britain’s biggest and most majestic bird of prey, the sea eagle, has entranced people for millennia

These days, we pay homage in a different way. Up in Scotland, where sea eagles were once hunted to extinction (as they were in the rest of the UK) there are now 130 breeding pairs. They are a magnet to binocular-wielding tourists who hope to spot them swooping to pluck a fish from the waves, or tear into an unfortunate rabbit.

According to the RSPB, the birds, referred to by twitchers as the ‘feathered barn door’ generate an astonishing £5million a year for the Isle of Mull economy. On Skye, they are worth another £2.4million.

Now these avian celebrities, which can weigh up to 15lbs, can be seen in England. This week they returned to one of their historic stomping grounds: the Isle of Wight.

Two juveniles were released at a secret location on Wednesday, as part of a £250,000 project to re-introduce them to a place where the last breeding pair was wiped out about 240 years ago.

According to an onlooker, the smallest, a male, fluttered a few hundred feet, while his mate, hopped out of a cage gingerly before flying to join him in a nearby tree.

Another four tasted freedom yesterday, each wearing a tiny ‘rucksack’, carrying a satellite tracker. All told, up to 60 sea eagles — also known as white-tailed eagles — will be released over the coming five years, in a move that conservationists hope will eventually establish a breeding population along England’s southern coast.

‘I have spent much of my life working on the reintroduction of these amazing birds, and so watching them take to the skies of the Isle of Wight has been a truly special moment,’ said Roy Dennis, a naturalist running the project with the Forestry Commission. 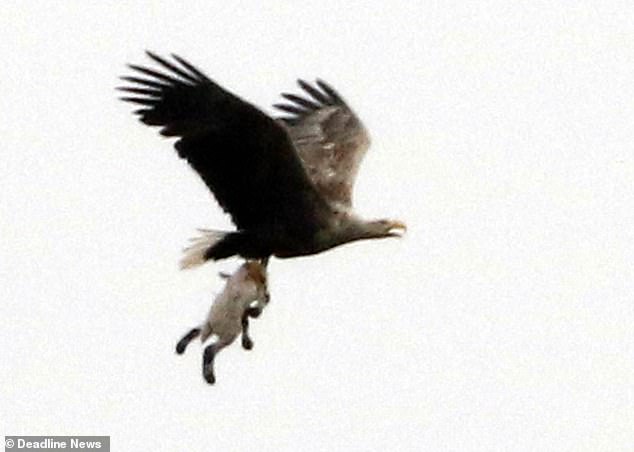 ‘The return of these spectacular birds to England is a real landmark for conservation,’ added Tony Juniper, chair of Natural England. So far so heart-warming. But as so often when we meddle with the delicate balance of the countryside, one man’s triumph is another’s tribulation. And in certain quarters of rural Britain, sea eagles turn out to be very unpopular indeed.

To blame is a simple fact: new-born lambs are among the creatures that feature in their voracious diet.

In Scotland, where sheep farming is already a marginal pursuit, crofters claim to have lost large percentages of their flocks, as populations of the birds have grown.

A few years back, it was reported that a single farm at Achnaba, Argyll and Bute, had lost 181 lambs in six years to sea eagles, while crofters in Wester Ross reckoned that 200 out of 1,000 lambs had been taken in a single year.

The numbers are disputed by conservationists, who last spring tried building scarecrows and shining laser beams on Highland hillsides to scare the birds away. But it didn’t work. 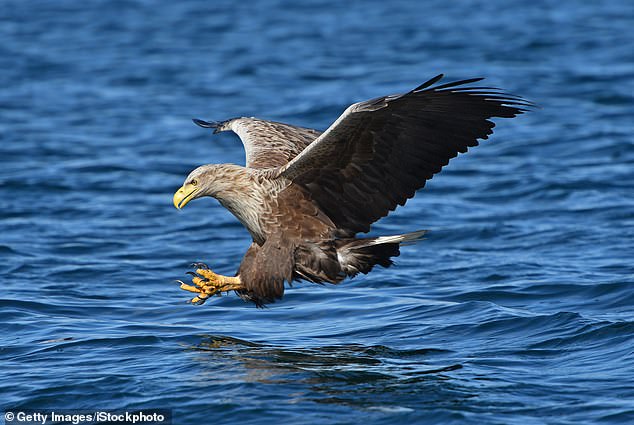 ‘One lamb was killed, but another has a hole in its side after a sea eagle tried to take it,’ Colin Cameron, who farms 2,500 sheep on the Ardnamurchan peninsula, told reporters.

‘It is still alive as I had to feed it through a tube three times a day. It is on penicillin to stop any infection, so I can’t let it outside, but generally we don’t find any alive.’

In May came another minor PR disaster for sea eagles: a holidaymaker on Mull, Douglas Currie, managed to photograph one carrying away a lamb.

‘We saw this big shape through the sky and my wife thought it was a fish,’ he said. ‘We then realised it was a lamb and I rattled off a load of shots. The bird was struggling. It’s the most extraordinary sight.’

Against this backdrop, it’s unsurprising that most of the Isle of Wight’s 135 farmers, who between them keep 40,000 sheep, are up in arms at the birds’ arrival.

‘Why would you introduce an apex predator to the Isle of Wight, without any understanding of the consequences? It’s all about eco-tourism — attracting more people to the island.

‘But what happens if it all goes wrong? You’ll have these giant predators all over the South of England and it’ll be too late to do anything about it.

‘This is a highly urbanised setting — they simply shouldn’t be here. I would think there is also a danger to people’s pets — cats and dogs and so on. It is ridiculous.’

The National Farmers’ Union has commented: ‘Any species reintroduction, particularly if it hasn’t been in the area for many years, can have a significant impact on the many benefits that the countryside delivers. In the case of sea eagles they are known to prey on livestock, particularly live lambs.’

Similar fears helped scupper a plan to introduce sea eagles to Suffolk a few years ago. Farmers with free-range chickens and pigs, who feared the birds could panic their livestock, successfully lobbied the Department for Environment, Food and Rural Affairs to withdraw funding for what they called a ‘bird-brained’ initative.

This time, farmers’ concerns have been ignored. And country people are said to be particularly suspicious of Natural England’s involvement in the Isle of Wight project.

Tony Juniper, the quango’s new chairman, is a one-time Green Party politician and Friends of the Earth executive.

And it played a central role in the debacle earlier this year that briefly saw farmers banned from shooting corvids, pigeons and other avian pests many of which prey on lambs.

Wherever one stands, the debate now raging helps explain the struggles that have been faced by sea eagles over the centuries. Once plentiful in Britain, their habitat started to decline after the Roman period, when wilderness was cleared and drained for farming.

Subsequently persecuted by landowners, who wanted to protect livestock, they then became a favoured prey of Victorian egg hunters and taxidermists.

Sea eagles vanished from the Lake District in the 1790s and from the rest of England by the 1830s. The last remaining pair perished in Scotland during the early 1900s.

Their return in Scotland was pioneered by Roy Dennis, who in 1975 brought four Norwegian birds to the island of Rum followed by another 81 over the next decade.

Eventually, pairs began to form and the first Scottish bird fledged in 1985. By 2005, sea eagles were being spotted soaring over Glasgow and, in one case, the car park of an ASDA store in Dumfermline.

Dennis, who is 79, now has relocation down to a fine art.

The six juvenile birds taken to the Isle of Wight were removed from nests in Scotland two months ago, by an assistant who climbed the trees, aided by spikes attached to the inside of his legs. The birds were then driven south to their release site and placed in a cage.

To increase their chances of surviving in the wild, human contact was kept to a minimum. They were fed a diet of fish and rabbits by keepers who remained out of sight, passing meals into their enclosure using a special beak-shaped trowel.

Coming months will see further meals sneaked onto the roof of their release pen under cover of darkness, to supplement the diet while they learn to hunt.

Dennis and fellow conservationists hope the sea eagles’ new habitat will provide a steady diet of fish and water birds, from the English Channel — and not too many of the endangered red squirrels and fluffy lambs who call the surrounding farmland home.

But as the rural community knows only too well, you take nature for granted at your peril.

So no one can be sure how things will play out until, as they say, these magnificent eagles have landed.