Harnessing wind and bracing for a sea change: How the climate crisis affects Victoria

Human activity is altering the Earth’s climate in unprecedented ways, with some shifts now inevitable and irreversible, the Intergovernmental Panel on Climate Change warned in its most recent assessment last week.

Within the next two decades, temperatures are likely to rise by more than 1.5 degrees above pre-industrial levels, breaching the ambition of the 2015 Paris climate agreement and bringing extreme weather. What, exactly, does this mean for Victoria? 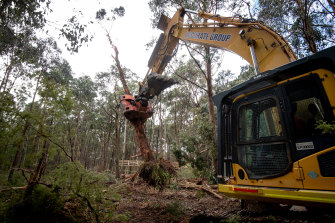 Workers clean up at a Trentham property the June storms. Credit:Eddie Jim

The state’s climate is already changing, becoming hotter and drier, according to the state government’s most recent climate science report. By the 2050s, if global emissions are not heavily reduced, the annual average temperature may increase by up to 2.4 degrees compared with the 1986-2005 average. That’s about double the number of very hot days.

The number of high-fire-danger days will increase and annual rainfall will decrease, but extreme rainfall events like the storms in June will become more intense.

This has significant implications for crops in the dry and semi-arid regions of the north-west Mallee and Wimmera, where some crops need “autumn break” rains to germinate seeds. And the drying is likely to continue, particularly over western Victoria.

The whole state will experience more heat extremes, not only in summer but also in winter, which has a range of knock-on effects, including early flowering of plants and a reduction in snow, Dr Gallant says.

Asked how she felt when reading the IPCC report last week, Dr Gallant sighs heavily. “I was a bit dejected, to be perfectly honest with you. We’re all well aware of this stuff, but to see it compiled, and the facts of where we are really going … it’s a bit of a slap in the face.”

On the night of the fierce storms in June, Victoria experienced record rainfalls as winds of up to 120km/h tore across the state, snapping trees like twigs and tearing the roofs off houses.

But Gale and Gusto – standing 68 metres tall in an open field – survived unharmed, despite tracts of the nearby Wombat State Forest being flattened.

Gale and Gusto – named by a local school student in a competition – are the two turbines at Australia’s first community wind farm at Hepburn, near Daylesford. Built to weather a typhoon, they produce about 4.1 megawatts, enough clean energy to power more than 2000 homes. 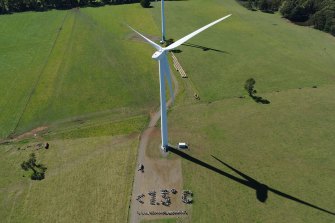 The Hepburn community wind farm. The community has been raising the alarm on global warming for years.

Hepburn Wind was established in 2007 with unwavering support from locals keen to nudge the region towards zero carbon emissions – one of the measures to “future proof” the community in the face of deepening concern over fossil fuel-driven global warming.

Fifteen years later, and the future they were concerned about is here.

In Hepburn, they know what it’s like to live with daily climate uncertainty. In 2019 there were significant bushfires in the area and spot fires are a regular occurrence, says Hepburn Wind spokesperson Taryn Lane.

That’s why they have expanded their ambitions to establish Hepburn Z-NET, a partnership that brings together community groups, experts and the council to shift the Hepburn Shire to zero net energy – producing as much as it consumes – by 2025 and net zero emissions by 2030.

“The IPCC report is not new information for us, it’s more fuel for the fire. The past year it [global warming] has been so in our face.”

The sea level is projected to rise about 24 centimetres across Victoria by the 2050s. Geomorphologist David Kennedy, from the University of Melbourne, says this will be experienced differently in bays compared with the open coastline.

Coastal erosion is already occurring in Inverloch, Apollo Bay and Port Fairy, and it’s no coincidence that it is happening where humans have substantially altered the shore, Professor Kennedy says.

In places such as Port Fairy or Portland, sea walls and wharves have altered the movement of sand and sediment, and it’s difficult for scientists to predict how the dynamic ocean systems will react.

“We are already out of balance and already building in the current storm zone,” he says.

“That’s why we need a ‘managed retreat’ – let’s move away from the coast, start moving inland and move out of the hazard zone.

In western Victoria scientists are starting to see a change in wind direction, by just a few degrees but enough to alter sand and sentiment movement and reshape beaches.

“We tend to think the environment is state, but it’s incredibly dynamic,” Professor Kennedy says. “And we’re throwing the system out of equilibrium, and we’re continuing to do this. It’s a bit depressing.”