HARRY WALLOP confesses to a rather nerdish midlife obsession

I’m just potty about postboxes: As the first box marked with Charles III’s cypher is being readied, HARRY WALLOP confesses to a rather nerdish midlife obsession

Some men, when they hit their mid-40s, buy themselves a sports car or start an affair. My midlife crisis is not as ruinous to my finances, but it could well spell the end of my marriage if I don’t watch out.

I am obsessed with the postboxes of Britain. But not just any old letter box, a very particular type that sets my pulse racing and lifts my spirits as only the highest mountain peaks can. They are Edward VIII postboxes and very much the Himalayas of Britain’s street furniture.

Let me explain. There are 115,500 postboxes in the British Isles and you have probably noticed that on the front of nearly every single one is a royal cypher, the monogram of the king or queen, embossed in cast iron — a symbol that immediately dates the postbox and roots it to a particular reign.

Soon, we will start to spot the first new cyphers in 70 years — that of our new king: CIIIR.

I am obsessed with the postboxes of Britain. But not just any old letter box, a very particular type that sets my pulse racing and lifts my spirits as only the highest mountain peaks can. They are Edward VIII postboxes, pictured, and very much the Himalayas of Britain’s street furniture

But for now, there are just six different possibilities. Over two-thirds of postboxes carry the emblem of the late Queen — Elizabeth Regina or in cypher parlance: EIIR.

Surprisingly, there are still boxes from Victoria’s reign — ones with a spidery VR emblem.

The interlocking curlicues of her son, Edward VII’s cypher, and the solid, simple GR of her grandson George V can be spotted if you know where to look (for my sins, I do). As can George VI’s heart-like monogram, and that of his wayward brother Edward VIII, whose pillar boxes are a rare find indeed, like all things associated with this King Emperor’s reign.

There just weren’t that many coins, beer tankards or medals manufactured in his honour, given that he was on the throne for only 326 days in 1936 and never actually crowned before he abdicated.

A mere 130 or so boxes with his distinctive William Morris-style EVIIIR cypher remain in existence, which means they represent 0.1 per cent — or one in a thousand — of all postboxes. 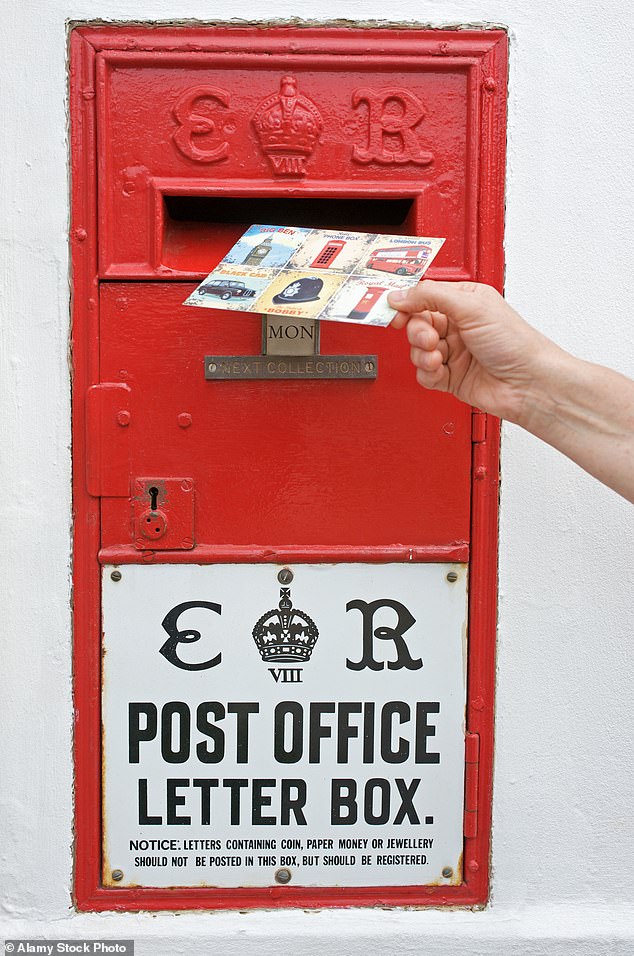 There are 115,500 postboxes in the British Isles and you have probably noticed that on the front of nearly every single one is a royal cypher, the monogram of the king or queen, embossed in cast iron — a symbol that immediately dates the postbox and roots it to a particular reign. Pictured: An Edward VIII post box

I cannot remember where or when I discovered this fact, but like all good bits of trivia it lodged in my brain, undisturbed like a dusty piece of Lego under the sofa. Until, one day, I spotted one, by sheer chance, on an early-morning run while staying with my sister-in-law in Stockport, Greater Manchester.

I experienced the same thrill of discovery that, I imagine, Howard Carter felt on entering Tutankhamun’s tomb. I then vowed that I would attempt to run to every other Edward VIII letter box in Britain. A task complicated by the fact the Royal Mail refuses to publish their location, worried thieves might steal them. Yes, they are that valuable.

So far, I have made it to 26, many on the roads of 1930s suburban villas, the Metroland that John Betjeman adored. The Covid lockdowns of 2020 to 2021 rather put a dent in my progress. I could not truthfully claim that hopping on a train in order to run three miles to a pillar box was a necessary journey.

They are situated from the Isle of Mull in the Inner Hebrides to Christchurch on the Dorset coast, which may make my challenge the work of a lifetime, not least because my wife increasingly rolls her eyes whenever I start to plot the next trip.

Also, I fear — for the next year — I may become sidetracked by the thrill of Charles III’s postboxes. And I am not alone. Robert Cole is a leading light in the Letter Box Study Group, a group of 450 or so men (and it is mostly men) who are obsessed enough to study and survey all the boxes in the British Isles. 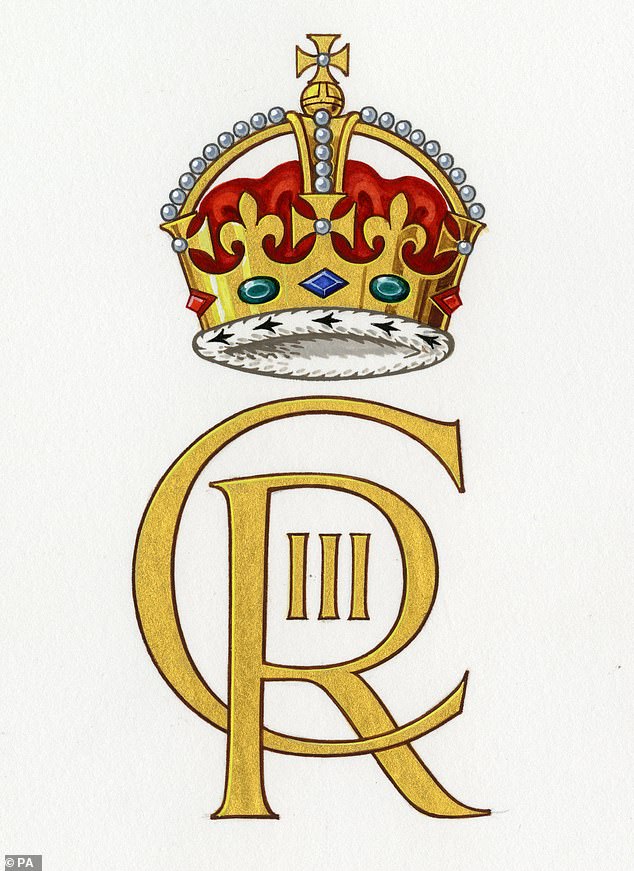 Soon, we will start to spot the first new cyphers in 70 years — that of our new king: CIIIR, pictured

‘We wear our anoraks with pride,’ he laughs. ‘I don’t want to sound in any way disrespectful, but this hasn’t happened for 70 years, so there is a lot of excitement among many members.’

We don’t yet know where or when the first Charles box will appear. The first of Elizabeth’s reign was installed in Whitehall, in November 1952, a full nine months after her accession.

The Royal Mail is not ready to reveal plans for the first Charles box, but has confirmed it will use up its remaining stock of uninstalled Elizabeth boxes first. It installs ‘low hundreds’ of new ones every year — either replacing damaged old boxes, or on new housing developments. Postbox nerds are hoping the first Charles box will be unveiled before Christmas.

Chris Taft, head of collections at The Postal Museum in London, points out that the first Charles coins, as well as his royal cypher, have been revealed surprisingly quickly, so maybe Charles is a man in a hurry.

He chose his motif of a C hooked into an R from a range of ten, all designed and painted by Tim Noad a leading scrivener (calligraphy expert) at the College of Arms, the institution in charge of heraldry. I was rather hoping for a cypher that nodded towards the 21st century — though nothing as crass or à la mode as CR7, the corporate monogram of footballer Cristiano Ronaldo with which CIIIR has been unfortunately compared.

Charles’s choice is decidedly traditional, which shouldn’t surprise us given his love of Georgian architecture. But his mother’s cypher, designed a year after the 1951 Festival of Britain, had a clean, crisp modernity about it, something that spoke to the Jet Age. Still, it will be exciting to see the first Charles one in the wild.

Aficionados will know that Victoria was not the first monarch to have her cypher cast on street furniture.

Walk around the inner circle of Regent’s Park in London and you can spot the emblem of both George IV and that of his younger brother William IV on the bases of gas lamps — a piece of technology that pre-dates the pillar box.

But it is the postbox that captures the hearts of so many nerds, because it is more than just a piece of metal plonked on to the byways of Britain.

It was a radical idea when first suggested by Anthony Trollope, a man shamefully better known for his novels than his work as Post Office surveyor.

Instead of having to walk or ride to the post office to send a letter, why not install ‘letter-receiving pillars’ near people’s homes, he suggested. The idea was tested out on Guernsey in 1852. Which explains why the oldest pillar box in the British Isles is on Union Street in St Peter Port on the Channel Island.

They soon became a hit, coinciding with the arrival of the railways, elementary education and the explosion in correspondence. We think we invented modern communication with email. No, the Victorians did with letters, which could be collected ten times a day from these new pillar boxes. 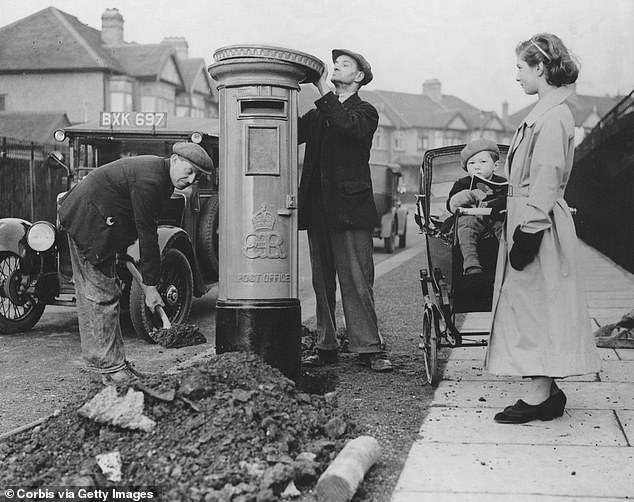 So, next time you walk past a pillar box, take a look and see which reign it comes from and imagine all the life that has passed through it. If you are very lucky, it may even be an Edward VIII or, thrillingly, a Charles III. Pictured The first Edward VIII pillar box is erected in December 1936

Think of all the love letters sent to soldiers on the front, lists sent to Father Christmas at the North Pole (postcode: XM4 5HQ) and urgent summons to deathbeds that these humble red boxes have witnessed.

They were not always red. The first Guernsey one was green and over the years blue ones, designed specifically for airmail, have existed. Then some were painted gold in honour of our 2012 Olympic and Paralympic winners.

We may not send as many letters as we once did, but they are still a key feature of our streetscape and an ‘iconic part of our heritage’ says Taft at The Postal Museum: ‘Pillar boxes are seen as something worth celebrating — look at the new tradition of people knitting pillar-box toppers.’

This is a growing trend of groups of ordinary people making whimsical woolly hats for their local pillar box.

So, next time you walk past a pillar box, take a look and see which reign it comes from and imagine all the life that has passed through it. If you are very lucky, it may even be an Edward VIII or, thrillingly, a Charles III.