Seoul: South Korea has added more than 1000 infections to its coronavirus caseload for the second straight day amid growing fears that the virus is spreading out of control in the greater capital area.

It also reported a record number of coronavirus deaths as the country’s biggest wave of infections since the start of the pandemic strained hospital resources and sparked panic buying in anticipation of a harsh new lockdown. 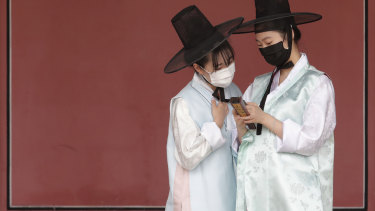 Women in traditional clothing and face masks look at a mobile phone at the Gyeongbok Palace, one of South Korea’s well-known landmarks, in Seoul.Credit:AP

The Korea Disease Control and Prevention Agency on Thursday said the COVID-19 death toll was now at 634 after 22 patients died in the previous 24 hours. Among 12,209 active patients, 242 are in serious or critical condition.

Nearly 800 of the 1014 new cases were reported from the densely populated Seoul metropolitan area, where health officials have raised alarm about a looming shortage of hospital capacity. Thursday marked the 40th consecutive day of triple digit daily jumps, which brought the national caseload to 46,453.

The country was hailed as an example of contact-tracing and pandemic management during the first wave, but the resurgence came after months of pandemic fatigue, complacency and government efforts to breathe life into a sluggish economy. 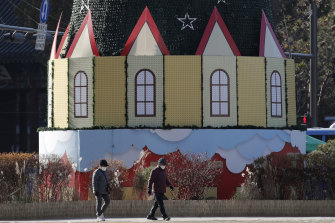 People walk near a Christmas decoration in Seoul, South Korea, on Thursday.Credit:AP

Officials are now mulling whether to raise social distancing restriction to maximum levels, which could possibly include bans on gatherings of more than 10 people, shutting tens of thousands of businesses deemed non-essential and requiring companies to have more employees work from home.

Many residents of Seoul have started stocking up on food and other essential supplies in anticipation the city will be locked down for the first time.

“I have already ordered dozens of instant rice packages online, and many of my friends and their families are rushing to large supermarkets,” one resident, who only gave her surname Lee, said.

Also on Thursday, officials in the Japanese capital, Tokyo, said the strain on the city’s medical system from the pandemic was severe, raising its alert level to the highest of four stages as the number of cases spiked to a record high. 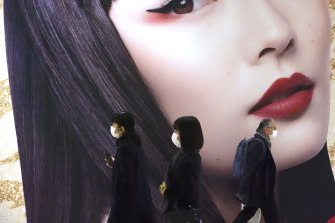 At a coronavirus monitoring committee meeting attended by Tokyo Governor Yuriko Koike, a health official said it had become difficult to balance the care of COVID-19 patients with regular ones as hospital beds filled up, assigning a “red” alert for medical preparedness for the first time.

The number of positive cases surged to a daily record of more than 800, public broadcaster NHK said, surpassing the previous record of 678 reached a day earlier.

In Europe, Denmark decided to effectively cancel Christmas. It will impose a hard lockdown over Christmas and the New Year to limit the virus spread, Prime Minister Mette Frederiksen announced.

Shopping malls will close starting Thursday, Copenhagen time, and other stores, except for supermarkets and food shops, will close from December 25. Students still in school will be sent home on Monday. “Our healthcare system is under pressure,” Frederiksen said. “We have to act now.”

Earlier in the day, Germany also reported a record level of coronavirus deaths as it entered a harder lockdown, closing shops and schools to try to bring down stubbornly high new daily infections. 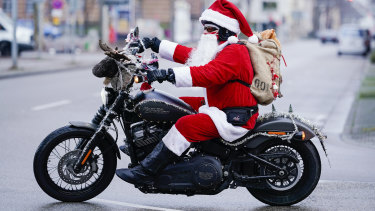 Patrick Kuntz, founder of the “Harley-Davidson riding Santas” initiative, rides through the centre of Landau, Germany.Credit:AP

The country recorded 179.8 virus infections per 100,000 residents over the previous week, a new high and significantly more than the 149 per 100,000 reported a week ago by the Robert Koch Institute, the country’s disease control centre.

It also blew past its previous daily death toll, with all 16 states reporting that 952 more people had died of the virus, the institute said. That was far greater than the previous daily record set on Friday of 598 deaths, although it included two days of figures from the hard-hit eastern state of Saxony, which did not report on Tuesday. It brought the country’s overall pandemic death toll to 23,427.

“It’s as if the virus wanted to remind us how important what we’re now doing is,” Health Minister Jens Spahn said of the surge in deaths being reported on the day new restrictions come into force.

Faced with exponentially increasing cases in October, Germany implemented a “lockdown light” at the start of November, which closed bars and restaurants but left shops open. The measures slowed the weekly increase in new infections but didn’t bring them down, prompting officials to take more drastic measures. 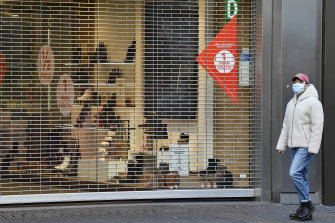 A man walks past a closed shop in Cologne on the day a harder lockdown came into force across Germany.Credit:AP

On Berlin’s upscale Kurfuerstendamm boulevard, Berlin resident Noury Oeddin looked around at the empty streets and shuttered shops in disbelief as the lockdown measures announced on Sunday were put into force.

“It’s very strange, it’s not normal,” said the 46-year-old bakery manager. “I don’t know what these politicians want to do – they left it all open for too long, and now all of a sudden we had to quickly buy everything in two days. We people don’t know what they are doing anymore.“

Retiree Hans-Joachim Pauer said, however, that the measures were understandable. “This is certainly harmful to the economy, but what alternative do we have?” the 71-year-old asked.

It comes as health officials in Alaska reported that two health workers had experienced adverse reactions about 10 minutes after receiving a coronavirus vaccine, part of the rollout under way in the US.

One received the vaccine on Wednesday AEDT and would remain in hospital another night under observation while the other, vaccinated the next day, has already fully recovered.

US health authorities warned doctors to be on the lookout for rare allergic reactions when they rolled out the first vaccine, made by Pfizer and Germany’s BioNTech. Britain had reported a few similar allergic reactions earlier this month.

Get our Coronavirus Update newsletter

Stay across the news you need to know related to the pandemic. Sent Monday and Thursday. Sign up here.