Has an Iranian warship sunk before ever leaving dock?

Has an Iranian warship sunk before ever leaving dock? Satellite images and video show new intelligence vessel on its side in dock ‘before entering service’

An Iranian warship in a Persian Gulf port appears to have sunk before ever even leaving dock.

Satellite imagery posted online purports to show the Talayieh on its side at a dry dock in Bandar Abbas, a port in southern Iran.

It comes after video surfaced online showing the warship lying on its side in a partially flooded dock at the port, the Iranian Navy’s main base. It was not clear how the ship had toppled over.

It is understood the vessel was in the final stages of construction and fitting before its planned launch next year. The extent of the damage and how long it could push back the launch was not yet clear.

Little is known about the Talayieh, but The Drive reported it appeared to be a derivative of the Moudge class corvette design while Iranian media referred to it as an ‘intelligence reconnaissance’ ship.

It is the latest in a string of apparent accidents involving Iranian naval vessels after one of the navy’s largest warships caught fire and sunk in the Gulf of Oman in June 2021 and 19 servicemen died when a ship fired a missile on another during a training exercise in May 2020. 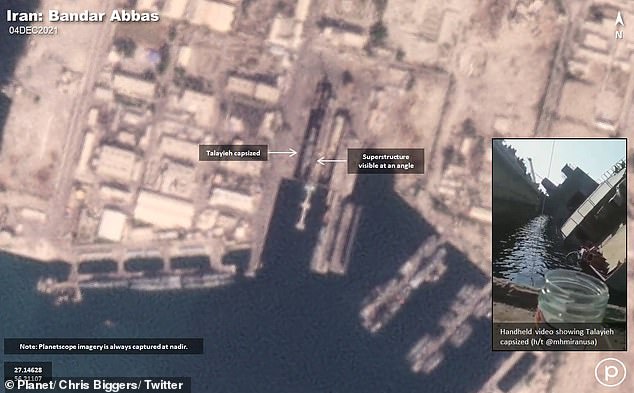 Planetscape satellite imagery purports to show the Talayieh on its side at a dry dock in Bandar Abbas, a port in southern Iran 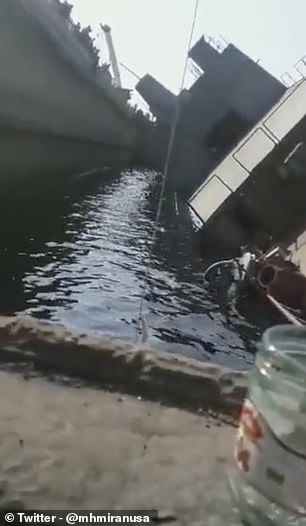 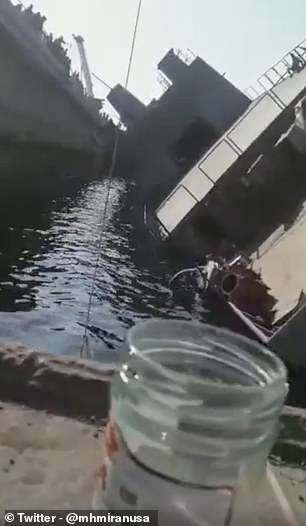 Images surfaced online showing the warship lying on its side in a partially flooded dock at the port, the Iranian Navy’s main base. It was not clear how the ship had toppled over

It shows a ship on its side in the dock in Bandar Abbas in what appears to be the same location as where the Talayieh was pictured by Iranian media in August.

The ship was filmed on its side in the dock on Sunday apparently just after it had tipped over and people could be seen hanging from the railings. At least one person died in the accident, according to reports on social media.

State media reported the ship would specialise in electronic warfare including identifying enemy targets, creating false targets and covering for other Iranian ships.

It appears to be the latest in a string of accidents involving Iranian naval vessels. In June, one of Iran’s largest naval vessels caught fire and sunk in the Gulf of Oman.

The Kharg, a 650ft cargo vessel designed to resupply ships at sea, caught fire after a fault ‘in one of its systems’ during a training exercise.

All 400 crew and students on board the vessel – built in Britain in 1977 – were evacuated with only minor injuries, the Iranian military said, before firefighters tried to tackle the blaze.

They were unable to save the ship which sank the following morning near the port of Jask ‘after 20 hours of dedicated efforts to save it’, Iranian officials said. 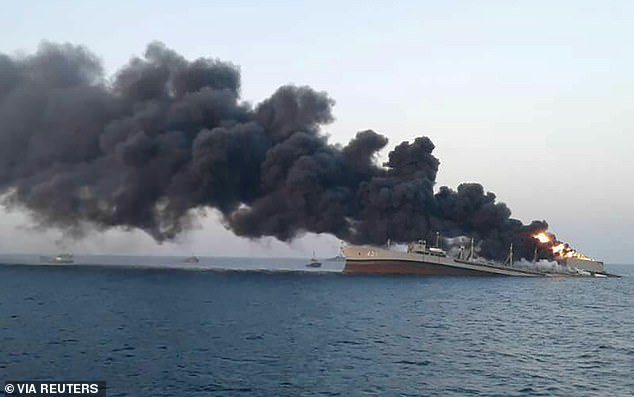 The Kharg, an Iranian navy support vessel and one of the force’s largest ships, sunk this morning near the port of Jask after burning for more than 20 hours overnight 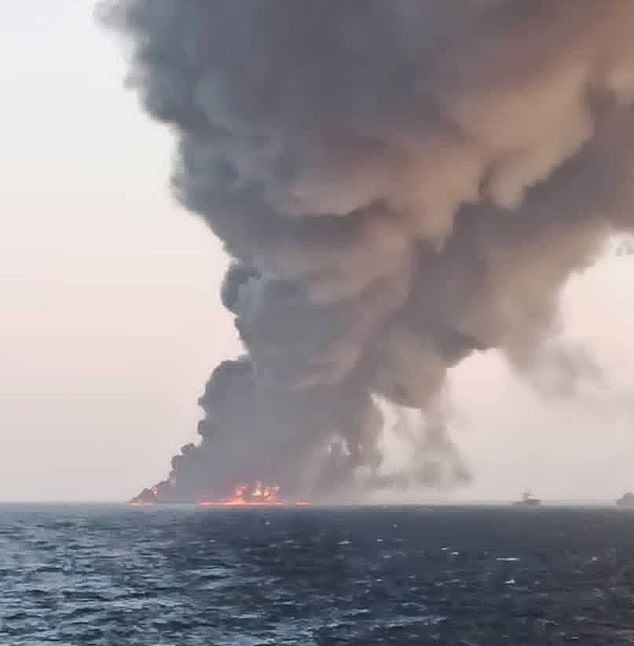 Iran at the time said the fire broke out ‘in one of the systems’ of the ship, without elaborating. It comes amid a series of attacks that Iran and Israel blame on one-another

Meanwhile in May 2020, 19 servicemen died and 15 were injured when an Iranian warship accidentally opened fire on one of its own support vessels during a training exercise in the Gulf of Oman

The Jamaran, a frigate, had been attempting to hit a target with one of its Noor cruise missiles when it accidentally struck a support ship named Konarak instead.

The Konarak had been placing targets for the Janaran to hit but remained too close to one of them causing the missile to lock on to it by mistake, state-run media said.

Also in 2018, an Iranian navy destroyer sank in the Caspian Sea.

In 2019, a series of explosions and fires on oil tankers linked both Iran and Saudi Arabia around the Arabian Peninsula brought the two sides close to war. 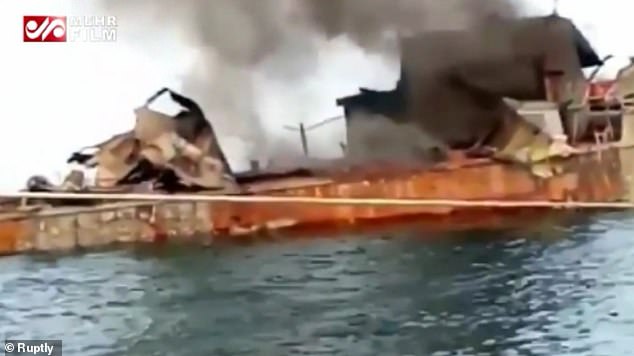 Iran said the Konarak (pictured) had been towing a target into place for the Jamaran to fire at, but remained too close afterwards – causing the missile to lock on to it by mistake